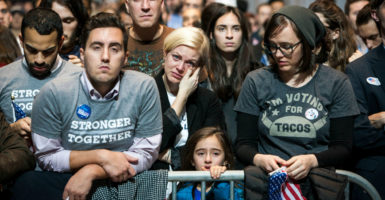 With the entry of creepy “Uncle” Joe Biden into the race for the White House, the total number of Democratic Party presidential candidates has reached 20, making it the largest field in history. Unfortunately, a massive number of candidates does not translate into great ideas on how to move the country forward. Most of the major proposals being offered by these presidential candidates are truly frightening and would propel the United States of America on the road toward socialism, which leads to economic ruin and societal devastation.

Although it is laughably expensive and completely unworkable, it is worthwhile to examine the potential financial cost of the Green New Deal if enacted. This plan, which has been endorsed by several Democratic presidential candidates, would cost $93 trillion or about $600,000 per American household, according to a study by the American Action Forum. This unrealistic 10-year plan to transition the country away from air travel and retrofit every building in the country is both unachievable and addresses a “problem” that is not viewed as very important by the majority of Americans. Most polls show the need to fight “climate change” far below other issues such as the economy, jobs, education, and healthcare.

Other proposals being offered by leading Democrats include raising the top income tax rate to 90%, allowing abortion on demand, eliminating private health insurance, providing reparations for the past sins of slavery and even adding more justices to the Supreme Court.

On the issue of voting, it seems Democrats want almost everyone to vote, including 16-year-old children, illegal aliens, and even prisoners. This week, U.S. Senator Bernie Sanders (I-VT) shocked an audience of Democratic activists when he declared that violent criminals, even terrorists, should be allowed to vote. According to Sanders, the rights of “terrible people” to vote in elections and “participate in our democracy” should not be infringed.

This proposal was so radical that even left-wing CNN anchors Don Lemon and Chris Cuomo thought it may hurt the chances of the Democratic Party in 2020. According to Lemon, “if you have committed a crime like the Boston Marathon bombings or if you’ve assaulted or abused a child, I don’t think most Americans would want people like that to vote.” Cuomo speculated that the proposal may lead voters to believe that the Democratic Party has “gone (too) far left.”

For once Lemon and Cuomo are right, the party has left the political mainstream and moved far to the left. Sanders, the unabashed socialist, is one of the leading candidates among Democrats, finishing second in most polls behind Biden. Among the 20 major candidates, there is not one bonafide centrist, in the mold of former U.S. Senator Jim Webb (D-VA), who campaigned for the 2016 Democratic presidential nomination.

Today, the Democratic Party does not care about moderates and it only cultivates the support of liberals and socialists. Their problem is that this block of voters is not large enough to win the general election in 2020. Democrats will need swing voters, moderates and Independents, to defeat President Trump next year. If they continue down this path, they have no chance of attracting many of these voters in the 2020 presidential election.

Ironically, the radical Democratic Party agenda is very helpful to President Trump. He will have the benefit of an easy nomination race, even though former Massachusetts Governor Bill Weld has announced plans to challenge him. While Trump is consolidating support, raising money, and enjoying the advantages of incumbency, the Democrats will be in the midst of a major brawl.

This large field is very positive news to the cable news networks, which are in a race to see who can offer the most air time and town hall meetings to these left-wing Democratic candidates. Of course, all of them use the forums to advocate a very progressive agenda and blast President Trump.

These performances only reinforce the fact that the Democratic Party has left the political center far behind. Former Democrat Pennsylvania Governor Ed Rendell is worried about the direction of his party. He believes that “the only way Trump can win is making the Democratic nominee and the Democratic positions the issue…there will be so much flak out there with these proposals that I think it's going to be fairly easy for President Trump to pin all those on the Democratic Party in the general (election).”

While the party’s radical agenda will turn off many voters in swing states, there is another problem for the Democrats. Although there are no moderate Democratic presidential candidates, there are differences in regard to race, sex, and age. Will young progressive voters enthusiastically support a “pale, male, and stale” establishment nominee like Biden?

It will be a fascinating 18 months until the 2020 election. Americans will have a choice between a President who will “stay the course” toward economic prosperity and a Democratic presidential nominee representing a party embracing a radical, socialist agenda. The choice will be clear, and the high stakes decision will determine the future survival of the United States of America.