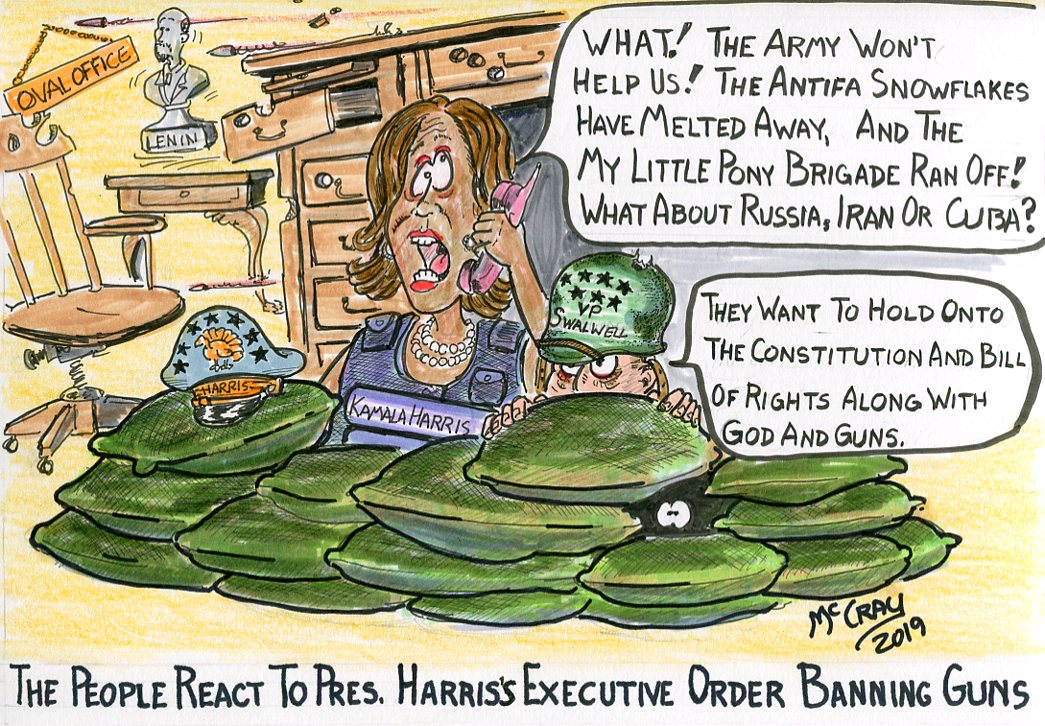 Don’t laugh - anything can happen! The thought of a California left-wing politician winning the White House is bordering on insanity. Sen. Kamala Harris (D-CA) and Rep. Eric Swalwell (D-CA), and other candidates have made the elimination of firearms a major platform in their bid for the Presidency. Sen. Kamala Harris has stated that she will give the Congress 100 days to do something about firearms or she will sign an executive order. Rep. Swalwell has stated on CNN that he is willing to jail law-abiding gun owners.

Their talk is taking a page out of Adolph Hitler’s rise to power (1933-1945) as Germany’s dictator as their leader, Der Fuhrer, and more recently in Venezuela when their Dictators made their people turn in their guns. A disarmed population is a controlled and enslaved people. The founders of the United States were just as concerned about the ability of the people to fight off an out of control government of the United States as having to fight a foreign power. It is for this reason the 2nd Amendment was added to the Bill of Rights; having a firearm is not a privilege, it is necessary right (for a free people).

The 2nd Amendment states: “A well regulated militia, being necessary to the security of a free state, the right of the people to keep and bear arms, shall not be infringed.” The un-American left who refuse to recognize the 2nd Amendment use all kinds of excuses to claim it’s out of date, claiming that it is not ironclad and question the exact meaning of the term ‘well regulated.’

It’s as if the Founding Fathers foresaw this argument, the 1792 Militia Act was created to call all citizens to serve for the common defense, it defined what is a Regulated Militia and more importantly what is an unregulated militia. The 1792 Militia Act called for all able-bodied male citizens of the respective states, between 18 to 45 years of age shall be enrolled in the Regulated Militia. All other citizens not in this standing Militia are in the un-Regulated non-standing Militia, therefore teenagers, men over 45, and women not part of the standing Militia can’t have their guns regulated. The law also calls for those in the Militia providing themselves with military grade arms, ammunition, and equipment required as aforesaid shall hold the same exempted from all legal suits. Those who are engaged in encouraging lawsuits against gun owners are violating this law.

In 1903, the standing, Regulated Militia was converted into the National Guard and Reserve, in the 1950s women and people of color were added to those who could serve and hold positions of a commissioned officer. In 1993, the 1792/1903 Militia was updated for archaic language and bookkeeping as it is a U.S. Statute Code (10 USC Chapter 13), which means the language and purpose of the 2nd Amendment is current and enforced. The un-Regulated Militia still stands as all who are not in the uniformed military or guard service, and any law restricting gun ownership is in violation of the law and unconstitutional.

The Founding Fathers must have had a crystal ball or they knew better than to trust those who came later, they understood the danger of greedy, self-serving politicians who seek power far exceeding their authority of what is allowed by the Constitution and the Bill of Rights. The 1792/1903 Militia Act established the people as the last line of defense for our country. So next time you hear someone say give up your guns, ask them why they are trying to disarm an integral part of our country’s defense system and that their action is a violation of federal law.