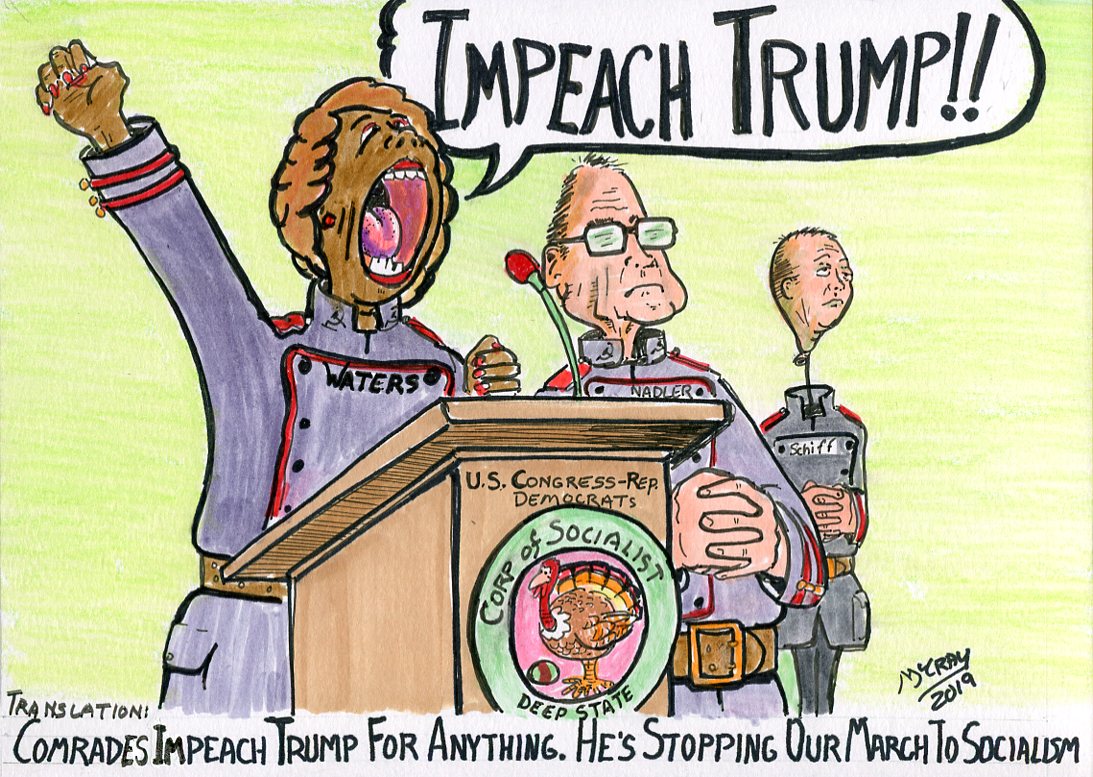 The Socialists of the Democrat Party have one message and one goal. Impeach President Donald Trump. Their reasoning is that he will be re-elected if he is not removed from office. Rep. Al Green (D-TX) stated in an MSNBC interview on 5 May 2019, in referring to the President, “I’m concerned if we don’t impeach this president, he will get re-elected. If we don’t impeach him, he will say he’s been vindicated. He will say we had an overwhelming majority in the house and didn’t take up impeachment. He will say he’s been vindicated.”

The problem for Rep. Al Green and his cohorts is the expected indictments from Mueller Report never materialized. President Trump has been vindicated.

Their entire game plane was wrapped up in the Mueller Report. They were so certain of the result that there was no plan B. It looks like the Democrats thought all they had to do was destroy Trump and they would take over the White House. Maybe they thought they would be able to get rid of Vice President Pence as well and the Speaker of the House would become the President. Nancy Pelosi as President; talk about the lunatics running the insane asylum.

The left is now in full panic mode, they are digging around for anything to throw at Trump that will stick or at least be used to camouflage the illegal activities by the Obama Administration, Hillary Clinton, the intelligence communicy and the Justice Department. Both sides are waiting with bated breath for the first shoe to drop with Inspector General Horowitz’s report on the activities of the FBI and others regarding the false "evidence" illegally provided to the FISA Courts.

Attorney General Bill Barr has further ratcheted up the tension on the left with the appointment of U.S. Attorney John Durham to investigate the genesis of the Russian investigations and the illegal actions that created the Mueller Investigation. He will look at the people involved in undermining Donald Trump, starting with the Obama Administration and the Hillary Clinton campaign using the CIA, FBI and Department of Justice as their weapons. All of this was supported by the Democrat Members of Congress and the left wing media. When this second shoe drops it’s going to look like a mass evacuation of all the cockroaches and rats the last time the city dump caught fire.

It may be wishful thinking to believe that the higher-ups responsible will ever be indicted, much less be convicted or serve time. The exposure of the spying and dirty tricks will go a long way to prove that basis of the hatred against President Trump and the Deplorables is a seething lust for total power by the left wing Socialists that have crawled into the Democrat Party, and the threat that they pose to the country. The question is what will happen to what’s left of the Democrat Party, and what will the people in this country do about the corrupt politicians involved?