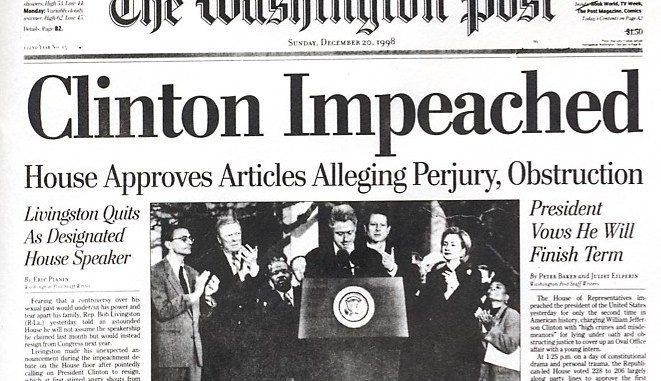 I believe many Democrats and some Republicans will potentially be making a devastating mistake on the outcome of a possible Trump impeachment. This group is trying to draw comparisons between Clinton's impeachment and applying a similar outcome for Trump. Those who are supporters of the president seem to feel that impeachment will assure President Trump’s re-election. Let's look at some possible differences and see if you agree that there could be a different outcome.

Let us start with the rationale for impeachment: the charge of high crimes and misdemeanors covers allegations of misconduct by officials, such as perjury of oath, abuse of authority, bribery, intimidation, misuse of assets, failure to supervise, dereliction of duty, unbecoming conduct, refusal to obey a lawful order, chronic intoxication, and tax evasion. Offenses by officials also include ordinary crimes, but perhaps with different standards of proof and punishment than for non-officials, because more is expected of officials due to their oaths of office.

These last four words are very significant: Bill Clinton was impeached while he was President for lying while under oath. He also was charged with obstruction of justice. The reality is that the House could impeach a sitting president for anything he might have done while in office, or before he came into office. The challenge will be to convince both the House and the Senate that something a President had done 5, 10, 20 or more years ago is an impeachable offense today. We saw in the Kavanaugh hearing that the Judiciary Committee spent more time on what he did before he left college and less time on his legal work after.

Bill Clinton took several oaths of office before he became president and his previous actions may have violated his oaths of office. President Trump was a private citizen all of his life and only took an oath of office as President of the United States. The Mueller investigation found no collusion between the Russian government and the president or his team. Collusion is not a crime. The exception is in the case of antitrust law, so we should all just stop using "collusion" as a shorthand for criminality. I'm afraid that the Democrats will not give up on the idea that collusion is a crime.

Bill Clinton lied before a grand jury and he tried to get people to lie when they testified. These two acts reflect strongly against his oath and occurred while he was in his office. These are grievous offenses and he should have been prosecuted. He was impeached under the law, he was tried under the law, but he was found not guilty. Remember it takes two-thirds of the Senate to support the bill of impeachment.

We have had four congressional committees and one special counsel all looking into the matter of President Trump committing high crimes or misdemeanors. None of the five have found anything with which to charge him or to impeach him. Now, after five investigations, House committees still refuse to accept the outcomes and want to start all over again. The definition of insanity is to repeat the same thing over and over again and expect a different result.

The big difference between Trump and the Clinton impeachments is that Clinton had the press on his side. Trump will not. I have no doubt that should impeachment be charged against Trump, the news media will clearly be on the side of the Democrats. So far in the Trump presidency, 91% to 93% of stories in the mainstream media have been negative against everything President Trump has done. I do not expect the media to be fair and balanced, but because an impeachment trial is so historically significant, I would hope the media would be more attuned to honest reporting. One can always hope for the best, but I’m not hopeful.

The press knows that the odds are not good that two thirds of the Senate will vote for an impeachment bill. The managers in the House will be presenting their case to the full House for their vote, and even their case may not be strong enough to pass an impeachment bill. After they make the case to the House, the Democrats will have shown their hand, and the President's defenders in the Senate can then attack the House manager’s claims.

This is a serious process, and there is a reason why it has been used so seldom in the history of the nation.  One final thought: I wonder that if the Democrats bring a bill of impeachment and go to trial and lose, will they finally agree to move on? I don't think so; the Democrats will never agree they were wrong.