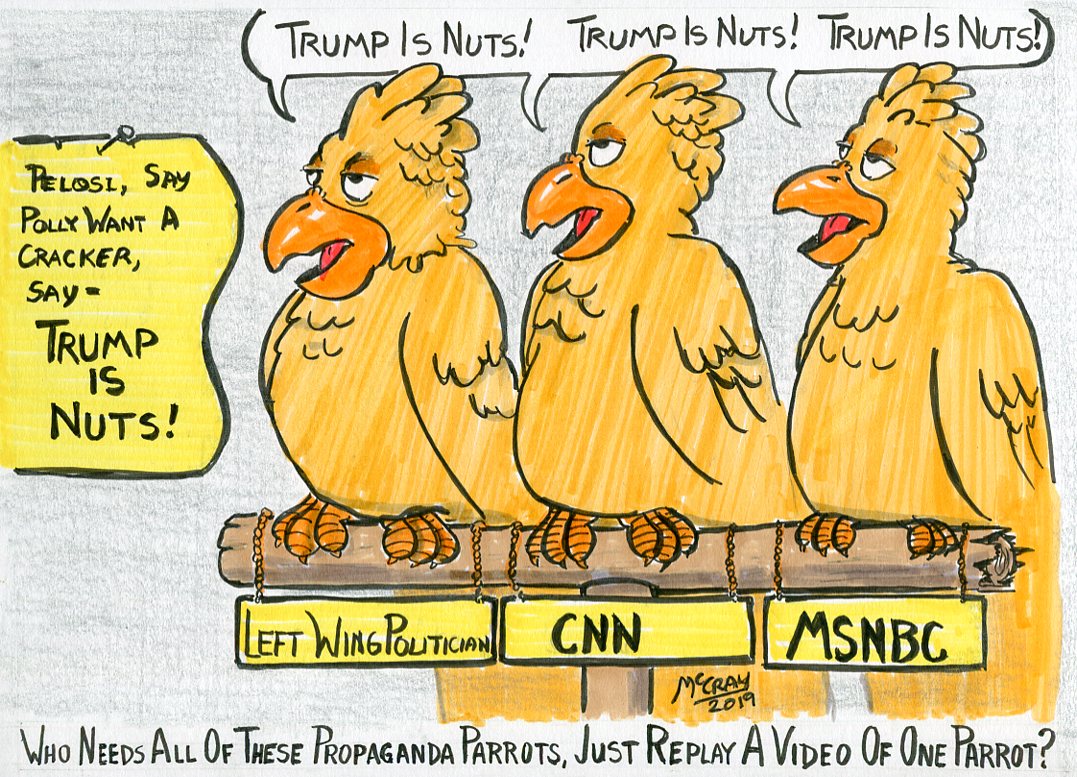 You can change from one news media channel to the next and you can listen to a talking parrot on each news channel saying the same thing, literally word for word. Once a buzz word or buzz phrase attacking President Trump or Conservatives in general has been received, it seems that the anchor or host on each show will repeatedly parrot the phrase by injecting it into each story.

The latest buzz has come from the Speaker of the House, Nancy Pelosi, who said that Donald Trump is engaged in a cover up. Within minutes the left wing news media was repeating the phrase, that the President was engaged in a cover up over collusion of Russian involvement in the last Presidential election. Despite the fact that the very issue of the Trump Administration being involved with Russia has been thoroughly debunked by the Mueller Report.

The talking parrots are participating in a coordinated collusion of repeating the same buzz phrases in sync with the other like-minded so-called news formats. They are following the tried and true propaganda principle of continually repeating the same lie over and over. After a while the public will believe the lie. To call this news is a misnomer. The political view point of these stations is front and center, and that is hard left socialism.

If the left wing parrot news activist get their wish, many will soon be out of work. Socialist governments historically have a single news network controlled by government minders. The propaganda minister’s office writes the story line for the news programs which are repeated around the clock. The news network staff is small, with a handful of news anchors to present the daily propaganda news report.

Now that a socialist government would have complete control over the “News,” all of the former activist reporters will have to find another line of work. The big pay checks will be gone and the highly inflated egos will be deflated. Maybe CNN’s Bob Acosta and MSNBC’s Rachel Maddow can get jobs selling electric cars for Ms. Ocasio-Cortez.