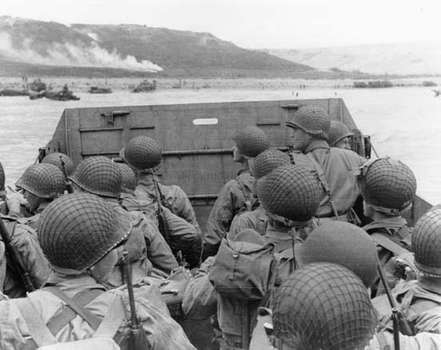 Try to imagine if you can that you are fresh out of High School or a bit older. Perhaps you have a girlfriend or wife, perhaps not. You may never have traveled outside your county or state.

None of that matters though because in a very short space of time, you have gone from whatever you were comfortable with, to watching our nation become engulfed in a war half a world away from your favorite fishing hole, bowling alley, mountain top, or church. Now you are doing your part after proudly joining the military. Suddenly you find yourself feeling alone on a landing craft tossing in a violent sea which is causing many of the guys around you to turn green and toss their breakfasts.

The closer you get to the unseen shore, the louder the gunfire sounds, the thicker the smoke and the mixed smell of blood, vomit, and waste from guys who who have already landed and are mortally wounded. Some of the men on your craft are silent, while some pray silently or out loud. For far too many of them, whatever they were doing at that moment the front of that craft opened to merciless enemy machine gun fire was the very last thing they ever did.

If you survive that moment, you face the ordeal of stumbling or crawling past the dead or dying bodies of men who were alive only moments ago in a sea turned red with their blood. They have been svaged by the countless booby traps and sharp, jagged iron structures designed to rip them - and you - to shreds. All the while, the incessant machine gun fire pours down from multiple positions above you.

Fire, smoke, death, the sounds of men screaming in pain mix with explosions, tanks rounds, and the pounding surf - if you made it to the beach. In short, you got a taste, a glimmer of what you imagine that hell must be like.

This was your first time away from home and every next moment could be your last. This was what so many brave men experienced on our behalf on D-Day seventy-five years ago.

As we remember this day and gratefully honor their sacrifices, let us always keep in mind that had these men not embarked on this momentous operation, the largest assemblage of military force in history, the war in Europe might very well have been lost and one of the most evil tyrants in history might have had unbridled power for decades after.

The world owes all of these brave men and women as well as all veterans a debt of gratitude that can never be repaid.