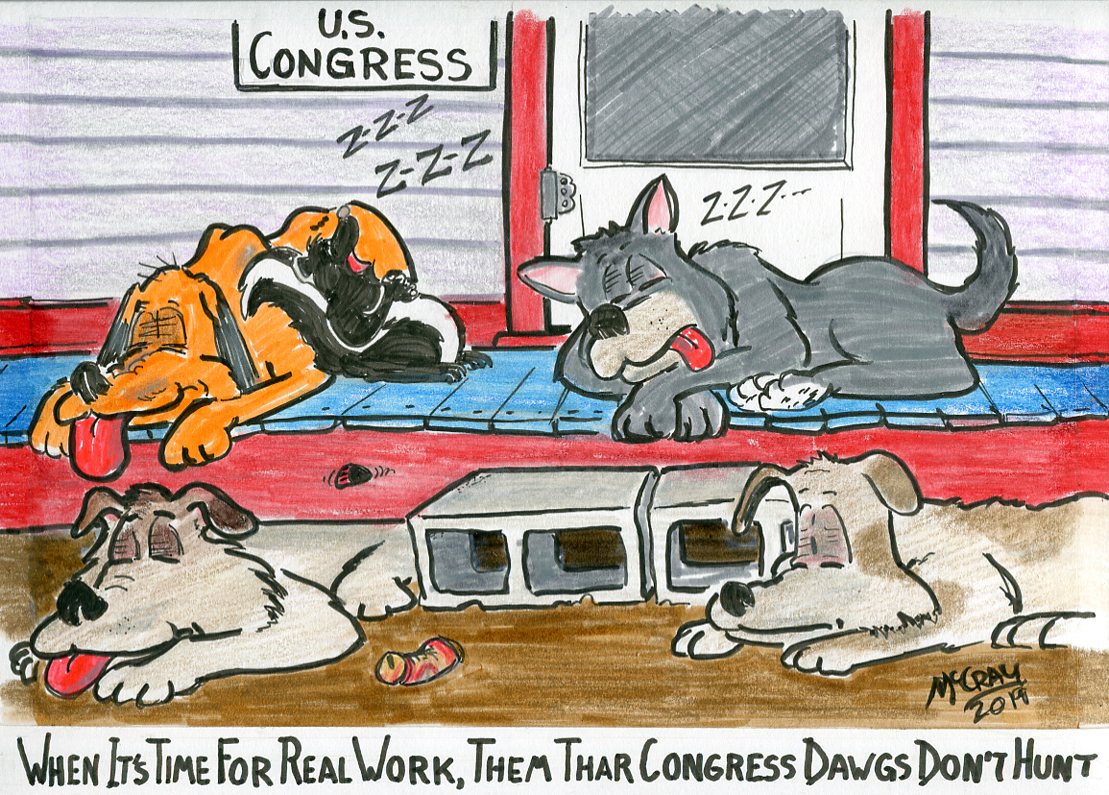 Congress is worse than a bunch of old hunting dogs. They bark and howl at the slightest provocation, and if you get to close they try to bite you. But when it’s time to work all they do is lie around and sleep. It doesn’t matter which house of Congress or which party, the professional politicians focus is on one thing, and that’s getting re-elected.

The house Democrats have now taken things to a whole new level, everything is now done for their Party. Doing the job of representing the people that elected them to their office is not anywhere on the agenda. The issues regarding the budget, immigration, opioid drugs, repairing the infrastructure of the country, terrorism and law enforcement have all taken a back seat to all the efforts to derail President Trump.

The barking from the Democrats runs the gamut, from the basic aggravation of blocking bills to screaming for the President's impeachment for breaking imaginary laws that only the Democrats can see. Their maniacal one track mind approach is geared around the destruction of Donald Trump, they will not give an inch on any issue that might be considered as a victory or concession to Trump. The Democrats idea of being bipartisan in negotiations is the total surrender of the other side. It must be 110% their way and nothing else; being reasonable does not exist.

Our two party system of government is in jeopardy as the one-time radical fringe of Socialists are now in control of the Democrat Party and are providing the shrill extreme voice for that party. These radical extremist are seeking total one party National Socialist rule; there is no room for the Constitution or the Bill of Rights in the Socialist vision for the United States. The Socialists have targeted the Bill of Rights by going after free speech under the guise of political correctness and ownership of firearms by using the label of gun violence. They attack religion, censor the media, use propaganda, indoctrinate our youth, and use street thugs to silence protest. The Obama/Biden administration’s crimes of weaponizing the CIA, IRS, FBI, and other government agencies to attack Donald Trump and his supporters has created a dangerous and volatile situation.

If all of this sounds familiar, take some time and look up the NAZI Party of World War 2 and their rise to power under their leader Adolph Hitler. The NAZIs were established in the early 1920s in Germany under their full name, the National Socialist German Workers Party. All of the steps being taken by the radicals in the Democrat Party are eerily similar. If successful, the Democrat Party will have the same result, a single-party police state style of government. If we lose our Constitutional Republic, the odds of getting it back are very slim.

If the Dawgs won’t get off the porch and do their jobs, then they need to be replaced.