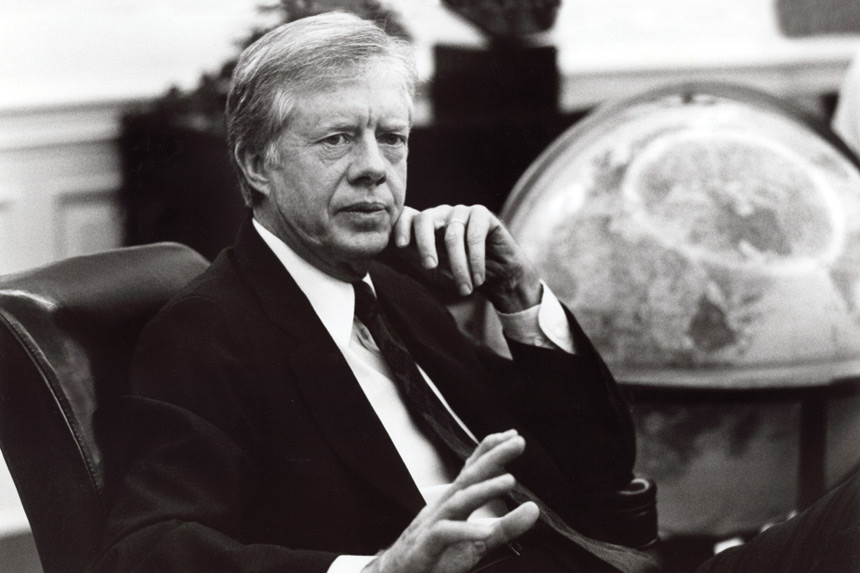 At the Democratic Party presidential debates, several of the candidates mentioned Russia as our country’s greatest threat, citing their attempts to influence the result of the 2016 presidential election. This obsession with Russia has infected the entire Democratic Party, including their elder statesman, former President Jimmy Carter.

Ironically, when Carter served as the nation’s 39th President, Jimmy Carter was a disaster on both domestic issues and foreign policy. He left the economy in shambles and our military in disarray.

In his dealings with the Soviet Union, Carter was a total weakling. As the communist nation expanded their sphere of influence around the world and invaded Afghanistan, Carter’s toughest response was a boycott of the 1980 Moscow Olympics. Surely, Communist General Secretary Leonid Brezhnev laughed hysterically when Carter penalized our Olympic team more than the Soviet Union.

A similar approach has been used by President Donald Trump. He is in the process of rebuilding a military that suffered greatly during the Obama administration. Trump has also armed the Ukrainians, boosted the NATO alliance and twice bombed the forces of Syrian dictator Bashar al-Assad, a close ally of Russian President Vladimir Putin.

Furthermore, Trump has unleashed our energy industry and for the first time in 75 years our nation is a net exporter of oil. Thus, he has challenged the Russians both militarily and economically. Obviously, he is no puppet of Vladimir Putin or a pathetic leader like Carter who was pushed around by our adversaries.

With such a pitiful record as President, it was comical to learn what Carter said during a “human rights conference” on Friday morning in Virginia. In an event televised on C-SPAN at the Carter Center with his Vice President Walter Mondale, the former President told moderator Jon Meacham that Russia placed Trump in office. According to the misguided former President, “If fully investigated, it would show that Trump didn’t actually win the election in 2016. He lost the election and he was put in office because the Russians interfered …on his behalf.”

This is nonsense, for Putin did not want Trump to win. A strong nationalist like Putin clearly favored Hillary Clinton, who did not promise to rebuild our military or our energy industry. As Secretary of State, she offered no resistance when Russia started meddling in Ukraine and other countries. She wanted to “reset” the relationship and expressed a desire for Russia to succeed. In fact, her boss, former President Barack Obama, famously promised that he would have “more flexibility” after his re-election campaign to make deals with Putin on “missile defense.”

While Obama de-emphasized missile defense to placate the Russians, Trump has bolstered this vital program. It is just another one of the many ways that President Trump has placed “America First” and strengthened our national security.

Despite all the accusations about Russia colluding with the Trump campaign and administration, Special Counsel Robert Mueller and his team of Hillary-loving, partisan Democrat attorneys found no evidence that the President or any member of his team colluded with Russia to influence the result of the 2016 election.

The Mueller report should have ended the Russian collusion narrative, but Democrats like Jimmy Carter will not stop peddling the fiction. In response to Carter’s allegation, President Trump said that it was a “typical talking point” of Democrats. He also noted that Carter was a “terrible President” who is mostly “forgotten” today. Trump claimed that he won the election not due to Russia, but because he “campaigned better, smarter, harder than Hillary Clinton.”

The real Russian collusion occurred with Hillary Clinton. She paid for a dossier on Donald Trump that was compiled by a British spy with the help of Russian sources. In effect, it was Russian disinformation that was used to attack a presidential candidate and spy on his campaign.

Prior to her role in approving the sale of Uranium One to an agency controlled by the Russian government, Hillary’s husband, former President Bill Clinton, cashed in with a $500,000 speaking fee in Moscow and spent time meeting with Putin. Also, her foundation benefited from $145 million in Russian donations linked to Putin.

Obviously, Hillary Clinton was compromised and weak in her dealings with Russia, while Trump has offered the completely opposite approach as President of the United States.

Despite the lack of evidence produced by a $40 million two-year witch hunt, the Trump/Russia narrative is frequently espoused today by Democrats, such as former President Carter. While the Democrats and their allies in the media continue to promote the discredited theory, hopefully, the American people are tiring of constantly being told a lie.

Jimmy Carter was the most effective president the Communists ever had in the white House in terms of advancing Communist interests:

1)  In 1977, although the U.S. by treaty had perpetual control of The Panama Canal Zone, Carter turned it over to a Communist dictator. The U.S. had spent Billions of dollars, and thousands of U.S. citizens had died building the Panama Canal to provide free trade for the world. Since the Communists took over, the Chinese have leased the military bases built by the U.S. in the hope that by being closer to our territory they would be able to shoot missiles at our nation.

2) In 1978 he broke our treaty and longstanding relationship with Taiwan, betraying them in order to normalize relations with the brutal Communist Chinese regime. In doing so, he signed the death warrants of hundreds of citizens of Taiwan, an independent nation that China claimed they owned.

3) In 1979 Carter gave away a vital part of U.S. defensive capabilities when he signed the SALT II Treaty with Russian Communist dictator Leonid Brezhnev. It required the U.S. to strictly limit its nuclear arsenal, while allowing the Russians to continue to build theirs. It was met with massive resistance by Congressional Republicans, but the Socialists and Democrats supported it.

Since leaving office, the ex-president has demonstarted his Socialist and Communist leanings in many ways, the most egregious of which was traveling to Cuba and praising Fidel Castro as a "Revolutionary Hero." He has publicly spoken out in favor of Communist and Socialist nations and policies that were against U.S. interests.