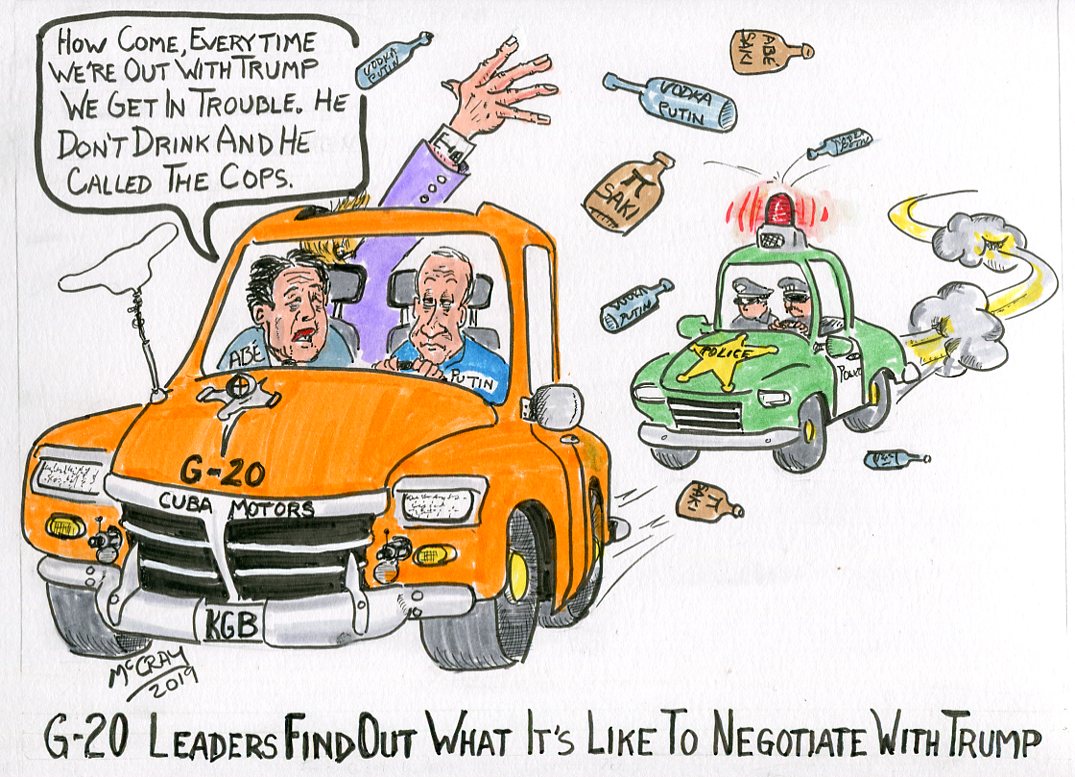 The World Leaders who attended the 2019 G-20 meeting in Japan received another dose of negotiations, al’a Donald Trump. This consist of a continuous schmoozing and patting them on the back while giving them a wedgie at the same time. Sort of like receiving a basket of goodies from welcome wagon along with a beautiful bouquet of tariffs and making them think they are getting a good deal.

The President has made a number of complaints regarding Japan, India and Germany. Both Japan and Germany are in the cross hairs over their lack of commitments to the overall mutual defense. India made the naughty list for imposing new tariffs on the United States. The U.S. has been obligated to protect Japan and Germany since the 1940’s. By treaty the United States would come to the defense of Japan if they are attacked, but no such provision exists for Japan to come to the aid of the U.S. Germany on the other hand hasn’t ponied up money they owe for their cost of the mutual defense of the European continent. Reagrding India's tariffs on the U.S., Trump stated “This is unacceptable and must be withdrawn!”

Iran’s belligerence in the shooting down of the U.S. Drone over the Straits of Hormuz and their threats of increasing the amount of nuclear material received the attention of the national leaders at the G20. Some sided with Iran, demanding that the United States return to the negotiating table. Others backed the U.S. position of adding even more economic sanctions against Iran. President Trump warned the Iranians that he would obliterate Iran if they continued the attacks on U.S. interests. The topic of North Korea’s denuclearization was also front and center, especially considering the proximity of the G20 meeting in Japan.

Not one to waste an opportunity, on wrapping up the G20 Summit President Trump called the North Korean dictator, Kim Jung Un and let him know that since he was in the area, he wanted to stop by for a visit. Catching everyone off guard on both sides of the pond, a visit was set up for a meeting on the Korean DMZ in Panmunjom. The meeting of the two leaders involved walking across the DMZ (demilitarized zone) line making Donald Trump the first sitting American President to do so, before sitting down to talk privately. The historic visit has resulted in the promise to restart talks on denuclearization.

One thing is for certain, Donald Trump’s may be unorthodox in his manner of negotiation, but he has been achieving positive results and breaking down barriers that most politicians wouldn't dare to cross.