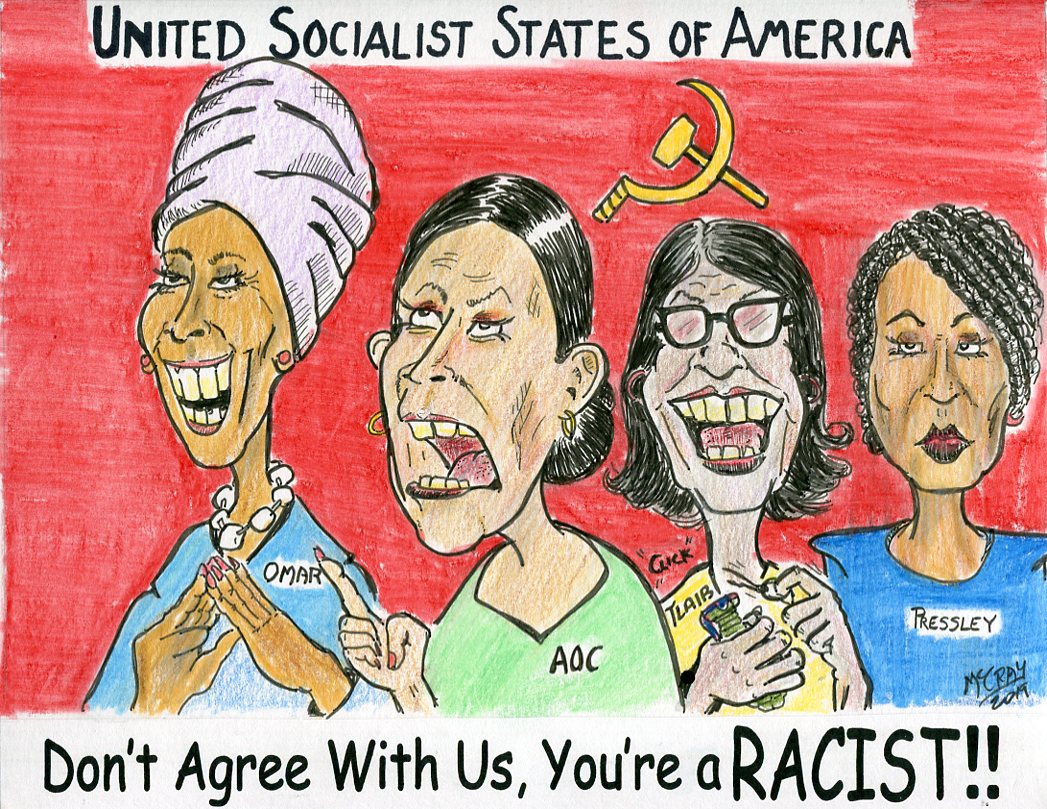 Aw, the soothing sound of the screeching of the Sirens of Socialism, it doesn’t matter what is said or who you are, if you don’t agree with the Squad - you’re a Racist. The four freshmen Congresswomen, Omar, Ocasio-Cortez, Tlaib, and Pressley will attack anyone that crosses their path; even Nancy Pelosi, the Chair of the House of Representatives, leader of the Democrats in the house has found herself in the crosshairs of the Squad.

In reality of numbers, Nancy Pelosi runs the Democrat-controlled House of Representatives which consist of 435 voting members and the Squad represents just four votes in the house. But, in the eyes of the media, the four darlings of Socialism are running the show and are controlling Washington D.C. You can’t turn on the news without getting a steady dose of the Squad making unrealistic demands or attacking their latest victim. They hold fast to the ideas of free medical care for all, free college education for all, global warming, no national borders, the elimination of ICE – Immigration and Border Patrol. The U.S.A. would essentially be an international free zone with no borders.

When it comes to racism, the newly minted Congresswoman Ilhan Omar made her views clear in a 2018 interview with Al Jazeera, when she made the claim that white men cause most of the deaths in the United States and “we should be profiling, monitoring, and creating policies to fight the radicalization of white men.” If Ms. Omar really wants to find racism she should look in the mirror. She has also made it clear that she is in full support of the Al Qaeda Islamic terrorist and looks down on our country.

The general viewpoint of this squad of four is very simple - it’s everyone else’s fault, and everyone will have to do things their way or everyone can hit the highway and leave. No one has died and left this bunch of screeching left-wing magpies in charge, they are the very loud grinding and squeaking wheel needing a lot of grease, which they are receiving from the like-minded so-called news media. The radical Squad has made themselves the face of the so-called Democrats and has proven to the people of the United States that the old Democrat Party is dead and a Socialist Party has replaced it.

The statements made by the radical four should be a warning to the general public of the extremism that exists in the congress, and their goal of a single-party socialist government. This requires the destruction of the Constitution and our Bill of Rights, and the establishment of a police state to control the population. Since the Bill of Rights would be eliminated, it means no free speech, no firearms to protect yourself, and no more ownership of private property as everything and everyone becomes the property of the state. We have seen this horror show before - it was called the Union of Soviet Socialist Republics, the U.S.S.R. (Russia 1917-1991). Everything was for the state and if you had a problem with it, you could join millions of Russians who were executed or were worked to death in the prison camps.

A few years ago anyone spouting this kind of garbage and expressing the hatred for this country as these four have, would garner a charge of subversion or at the least, would have been hauled off to the insane asylum.