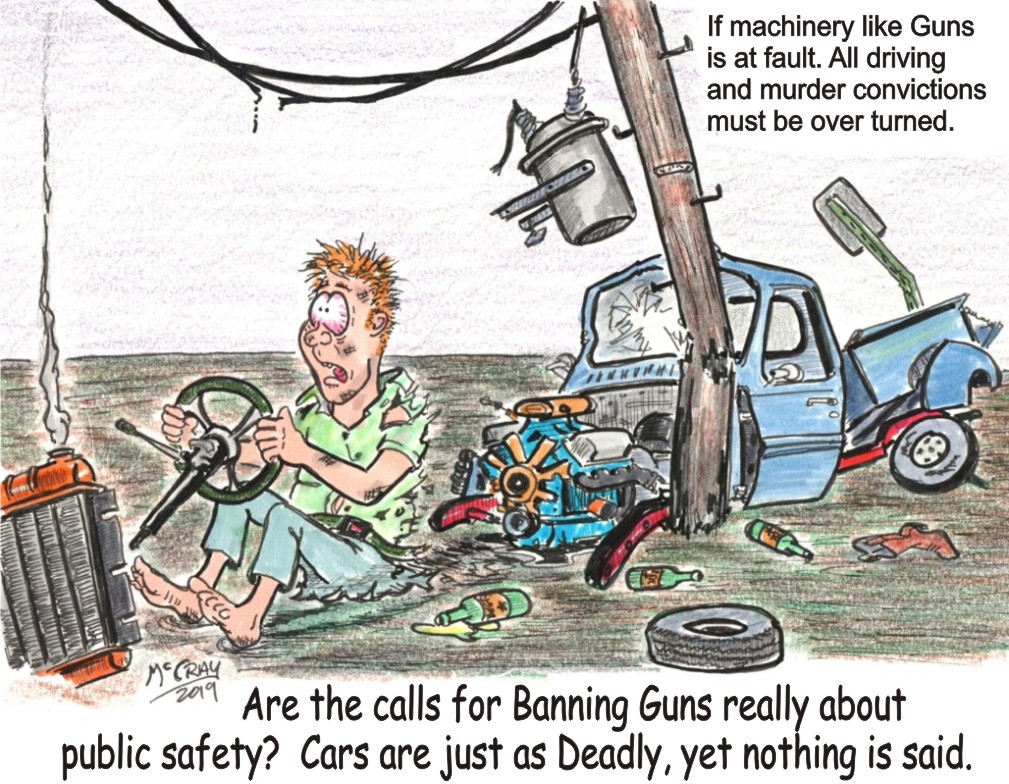 BAN GUNS, BAN GUNS, all of this screaming and yelling to ban guns is supposedly for public safety, for everyone’s protection, really? If this is true, why aren’t these same people screaming for planes, trains, and automobiles to be banned every time an airliner falls out of the air, a train wrecks, and cars crash? Because the push to ban guns for public safety is a bare-faced lie, perpetuated by the naive and the anti-American socialist left.

The new buzz phrase has been ‘GUN VIOLENCE,’ but violence is violence, regardless of the method or tool is used for a weapon. To blame a chunk of metal, a piece of machinery for the cause of the violence is totally absurd; if that is the case then cars are responsible for crashes. If a piece of machinery that cannot act on its own is responsible, then the people convicted of crimes involving a ‘GUN’ must be freed, and that terrorists, murders, drug dealers, and thieves are innocent because it’s the gun's fault. The same applies to ball bats, hammers, knives, swords, and cement blocks. The innocent people who were forced by these devious items to threaten and kill have been wrongly convicted by overzealous courts, and they must be freed.

For the lie of socialism to take hold and replace our two-party constitutional government the people, the unregulated militia (Militia Act 1792/1903, USC10 Chapter 13) the people of the United States must be disarmed. The armed people of the United States are the last line of defense for our country. In the Cold War, Russian Leaders knew they could not invade the U.S. because there was a .22 cal. rifle behind every tree. The Founding Fathers recognized the peoples' the right to be armed, as they proved in the Revolutionary War an armed people are a free people, a disarmed people are slaves, socialism is slavery.

Disarming people who have done nothing wrong, is direct infringement, under the 2nd Amendment, according to the phrase, “the right of the people to keep and bear arms  shall not be infringed.” To curtail ammunition, control which firearms people can have, and where they are carried is a violation of the 2nd Amendment and the Militia Act of 1792/1903 Revised 1956, 1958, and 1993, USC10 Chapter 13, using the Library of Congress version for correct content. Any court, and that includes the Supreme Court, has no right to violate this long-standing pillar in our Constitutional rights, but as everyone should know, rules do not seem to apply to the Socialist left in their thinking. In the military, whenever an order was issued that was way outside the standing structure of rules and standing orders, it was considered an unlawful order. Any court or governmental body that states they are going to ignore the standing law and violate your constitutional rights, cannot take your rights away, their orders or their so-called law is also unlawful and should be vigorously opposed. Fail to do so and you have surrendered your rights and have no longer have a voice on the issue; it’s over.

I am constantly amazed by the Socialist Propaganda Ministry, better known as the mainstream media news' inability to identify firearms correctly. These lovers of socialism can’t identify the favorite weapons of all socialist countries of the last 70 years. The SKS Rifle used in the Gilroy Shooting has been referred to as an AK-47 style Assault Rifle; the design is generationally different. The only thing the two firearms have in common is the country of origin, Russia, and it uses the same ammunition.

Another example of the ignorance in the media, regarding the term ‘ASSAULT RIFLE,’ the civilian market is not allowed to buy or own assault rifles, a true assault rifle is a fully automatic firing sub-machine gun; unless you have a special permit issued by the Bureau of Alcohol, Tobacco, and Firearms you cannot own an assault rifle.

To mislabel a topic, and misinform and outright lie to the public has become a trademark of the Socialist Propaganda Ministry (mainstream media news); they have reached a level almost equal to China, North Korea, and the old U.S.S.R., and they are proud of it. They think drilling holes in the bottom of the United States Ship of State is a great thing, but the idiots live on the same ship and will go down with it - there are no lifeboats. Once the great experiment that is the American Republic is gone there will be no one country to replace it, the light of the beacon of liberty that many countries want to copy will be extinguished.