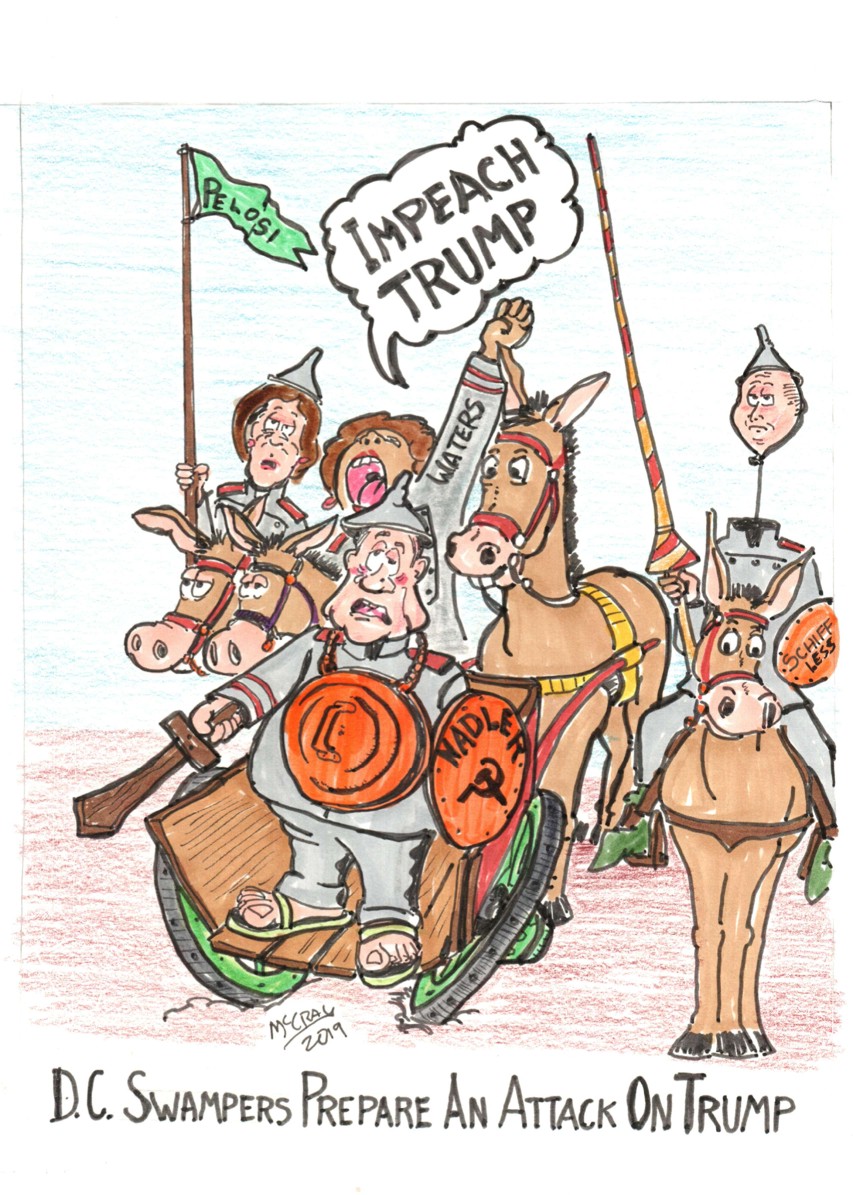 New York, Representative Jerry Nadler (D) and his band of Trump Haters have taken their world of the absurdity to the twilight zone world of the insane. After more than two years of investigations, hearings, reports, and communist-style show trials that fell flat on their face, and refusing to admit that there is no proof that the President of the United States is a puppet that works for the Russians, Nadler and his band still claim that President Trump has committed high crimes and misdemeanors worthy of impeachment and removal from office. Declaring to the world that they have all kinds of proof to Trump's guilt, yet they are never able to provide that proof, it always seems to disappear when it’s placed under the light.

Why would these politicians put all their eggs in one basket, literally putting their political future on the line? Have they been driven crazy by their blind hatred of Donald Trump, and are they so invested in the story of bringing Trump to impeachment that they have to continue preaching the false claims? They have to cover up the fact that they have done nothing in Congress except obstruct the Trump Administration. The last thing Democrats want is their left-wing base to see any cooperation with Trump.

The ‘Squad,’ the new firebrand Socialists that includes Ms. Ocasio-Cortez, Ms. Tliab, Ms. Omar, and Ms. Pressley have brought an extreme brand of socialism to the halls of the United States Congress. The people in Congress that are flocking to Nadler’s side are running scared that they don’t appear to be far enough to the left. They have two problems. First, the Democrat National Committee is now controlled by a bunch of socialists who seek to destroy our two-party system. Second, they have the false perception that their base has changed from Democrat to hard left-wing socialist; in reality, the socialists are just making most of the noise and getting all the TV and press time.

A politician that can’t get their face on the TV has their ego deflated, feeling rejected, lost, and confused, bordering on convulsions. This is when they begin jumping around looking for a topic or crisis to babble about, making sense is ill relevant and doesn’t need to have anything to do with reality. It’s all about marketing themselves, much like a street hostess trolling for customers. Regardless of whether the so-called Democrat leans a little left or not, they think that they have to act like they are hard left. It’s all about saving their precious seat in Congress and it becomes a sick game of trying to out-hard-left other left-leaning politicians.

With all efforts focused on 2020 national election, the so-called Democrats have no real issues to run on, they are trying to push socialist policies and ideas. Socialism appeals only in a bad economy, high unemployment, and a broken society. President Trump has wrecked their little red wagon of baloney by producing a booming economy, and the lowest unemployment numbers in U.S. history. The left-wing, want-to-be-president campaigns are pushing everything as free, and anyone from anywhere can jump the border and squat on the public dole at the tax payers expense.

Whereas, President Trump is making every effort to secure the border so only legal authorized people can cross the border. The buzz word name that has been used for these border jumpers is ‘Migrant;’ this is a deliberate mislabeling by the left and left-wing press. The term ‘Migrant’ is a seasonal farm worker who comes into the U.S. during picking season, and it is a deliberate attempt to confuse the public. The same goes for calling the border jumpers ‘Immigrants,’ as they are ‘Illegal Aliens’ which is the proper and legal term for anyone who engages in illegal entry into a country. All of the rushes made at the southwestern border of the U.S. have been organized and coordinated with left-wing politicians and left-wing activists engaged in trying overburden and break our border system. This is all about future voters for the left and increasing population counts in places like California in order to have more Democrat representatives in Congress. This is all about one party wanting complete control and being able to dictate how we will live under that control. Under that type of control, all of our guaranteed rights are gone and we are slaves of a corrupt and vicious police state.

Nadler’s latest effort to connect the failed Mueller probe investigation and the Judiciary Committee effort to find reasons to impeach the president has run into a major road block. Fully expecting a judge in the D.C. Circuit to look the other way and let the Democrats put the screws to President Trump’s staff, the effort was stopped by D.C. Circuit Judge Beryl Howell, on 14 Aug, 2019. Nadler’s Judiciary Committee tried to tie the two cases together over the subpoena for testimony by former White House Counsel Don McGahn, who had failed to appear before the committee under the declaration of White House immunity.

Judge Howell in rejecting the House Committee demands, stating, “at first blush, the House Judiciary Committee’s view that the related case applies is understandable,” but “nonetheless, closer examination demonstrates that these connections between the cases are too superficial and attenuated for the instant McGahn Subpoena case to qualify.” If Nadler had been successful, the McGahn case would have been pulled under the Mueller Probe and would have been used to access the sealed secret Grand Jury testimony and would have targeted Grand Jury witnesses. Instead, the McGahn case will follow procedure and go to a randomly selected judge; Judge Howell upheld the DOJ position that the Mueller Probe is of a criminal procedure and the McGahn failure to appear case challenge is of a civil court matter.