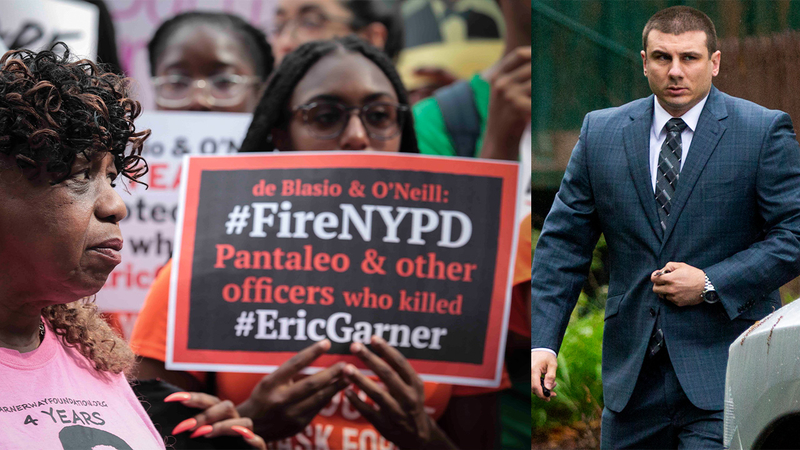 There is a good possibility that there are some among you who, while listening to the second round of presidential debates, which featured New York City Mayor de Blasio, heard a chant from a group of protestors that went something like “Fire Pantaleo”.

I’m certain there were many viewers who thought, “Fire Who”? And for good reason, most Americans would have no knowledge of who this individual is unless you live in New York City. I’ll not get into the entire minutia that surrounds this tragic event, but I think a brief history will explain what this is all about.

Daniel Pantaleo is a New York City police officer in the borough of Staten Island. On July 17, 2014, while responding to a business owner’s complaint, Pantaleo and several other officers, including a Sergeant, approached Eric Garner, an African-American, selling loose cigarettes on the street, which he had been warned about several times before. Garner complained about his being constantly harassed. He refused to heed the officers warning to stand down; he was being arrested.

Eric Garner had a lengthy arrest record for various infractions dating back over 30 years. In this particular case, he became obstinate and began struggling with the officers; Pantaleo was behind him and placed his arm around Garner's neck in what many, not all, believed was an illegal “chokehold.” Garner was wrestled to the ground and began crying out repeatedly, “I can’t breathe” while face down on the sidewalk.

All of the action was captured on video footage at the scene. Garner lost consciousness and was then turned over on his side to ease his difficulty breathing. Emergency services soon arrived within 6 minutes; Garner was transported to the hospital where he expired.

Eric Garner was a large man, standing about 6’4” and weighing upwards of 400 lbs. He was also a sickly man, obese and physically debilitated, asthmatic and with a heart condition. According to the medical examiner, his death was a homicide, which does not necessarily mean a crime was committed. Garner's death was the result of an asthmatic attack brought on by a chokehold, and other contributing factors.

Many in the NYPD have argued that it was not a chokehold that Pantaleo applied, and that if it were the case Garner would not have been able to cry out as he did, his ability to speak would have been impaired, and that his demise was due to his physical ailments. Officer Pantaleo was suspended from the force, and still is to this day, pending further investigation.

In December of 2014, a grand jury found no substantive evidence to indict Officer Pantaleo. The decision created unrest. There were protests and rallies and accusations of police brutality that spread even beyond the borders of New York City. Garner's death became a rallying cry for community activists, the Garner family, Black Lives Matter, racial arsonist Al Sharpton, and the grievance industry.

Back in New York, it seems a day has not gone by, since the fatal incident, when somewhere in local news reporting, mention is made of Eric Garner. Let me be frank, Garner's death was a tragic event, he was a husband and father, but it was brought on by his refusal to obey the officers on the scene. The city, in an out-of-court settlement, awarded the Garner family $5.9 million taxpayer dollars.

Earlier this year, the U.S. Department of Justice, under federal civil rights law, found there was no crime committed and declined to bring charges against Officer Pantaleo, which caused another outcry and more protests. Pantaleo now awaits a decision on what his fate will be as a member of the NYPD. However, that decision may have been prejudiced.

You might recall at the debate when the chant went up “Fire Pantaleo,” Mayor de Blasio was questioned about this issue and stated in effect that the Garner family will see justice done soon. What the mayor did in his response was to prejudge the decision by sending a message to the decision-makers who decide whether Officer Pantaleo is fired. In effect, he was telling the police brass that they had to fire this officer, eliminating any possibility of a fair, unbiased decision.

My contention can be supported by what took place following the debate. On August 02, 2019 a hearing was held to determine the impact of Pantaleo’s treatment of Garner. Administrative Judge Maldonado recommended that Pantaleo’s employment with the NYPD be terminated. The final decision will be in the hands, by law, of Police Commissioner O’Neill. I don’t envy his position. One way or another, the Commissioner will be disparaged and criticized, by either the police unions or Garner family and activist groups.

There seems to be little doubt that the scourge of the city, Daniel Pantaleo, a police officer who was doing his job, will not survive this onslaught that has devolved over the last 5 years. The slings and arrows of anti-police activists, and some in the media are aimed and ready to fire. And so, instead of officer Pantaleo having to suffer through the next several weeks, uncertain about his future, and before Police Commissioner O’Neill determines whether to fire him or not, which will be forthcoming by the end of August, I suggest Pantaleo resign, if possible with his pension. Why give his tormentors the satisfaction of seeing him humiliated before the city, and now the nation?