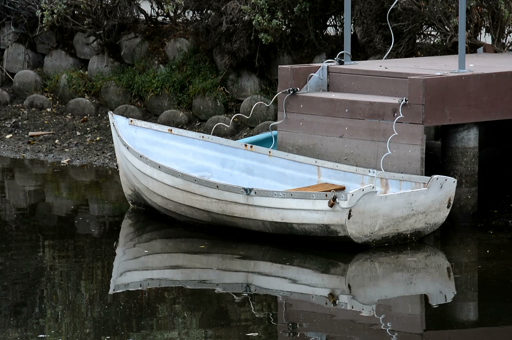 Here’s an unusual story, created by a usual cause, with the usual effects, until now!

Some sailors had been drinking. It was late on a dark night and they wished to return to their ship. They arrived at the place where they had left their rowboat and drew out the oars. They rowed and rowed and seemed to make little progress. Finally, the soberest among them discovered that they had never loosened the boat’s painter from the wharf. (A painter is a rope that is attached to the back or front of the rowboat to a wharf.)

There’s a lesson here that can set captives free. God asks us to do two things in order to go forward. Not only do we need to row, but we also need to cut loose of past, present, or future things holding us back. Unresolved issues behind us in our past can impede us from what God and life have for us in the future. There’s no future other than the past when we are tied to the wharf. The harder we try, the more exhausted we become. Our effort is not as strong as a wharf.

Forgiveness is not for others. Forgiveness is for us. It’s the key to the handcuffs, freeing us from them. We are free, but we need to uncuff ourselves to experience what can be, rather than what was. Playing the victim only reinforces unforgiveness by blame-shifting. Victimization may empower us to row harder and faster on the fuel of hate or revenge. But, row as we will, we will still be tethered to the wharf of victimization. Like a rat inside the cage on the wheel of misfortune, we’re going nowhere.

May I say something personal? You are not a victim. You are a human being, made in the image of God, who had something bad, even devastating, happen to you. What happened to you is not who you are. Quit taking on a false identity or you will be tied to the wharf ad nauseum. You will become a lightning rod for calamity, and a mighty magnet attracting problems from near and far.

Many of you would agree with much of what I have written so far. The key is doing something about it. The solution is often as simple as untying the rope. The rope, not the wharf, is the problem. Here’s the solution all effective, life-transforming counseling is aiming you toward. When you are finally ready, loosen your grip on the rope of your issue, then let go. Don’t look back. You’re not going that way.

“Human beings have been procrastinating for centuries. The problem is so timeless, in fact, that ancient Greek philosophers like Socrates and Aristotle developed a word to describe this type of behavior: Akrasia. Akrasia is the state of acting against your better judgment. It is when you do one thing even though you know you should do something else. Akrasia is procrastination or a lack of self-control. Akrasia is what prevents you from following through on what you set out to do.”

People, this isn’t information, it’s illumination. Understanding how our brain works, then managing your brain, empowers you to bridge the gap between where you are and where you want to be. Decide to be future-minded. A decision is a breakthrough into your real self in seed form.