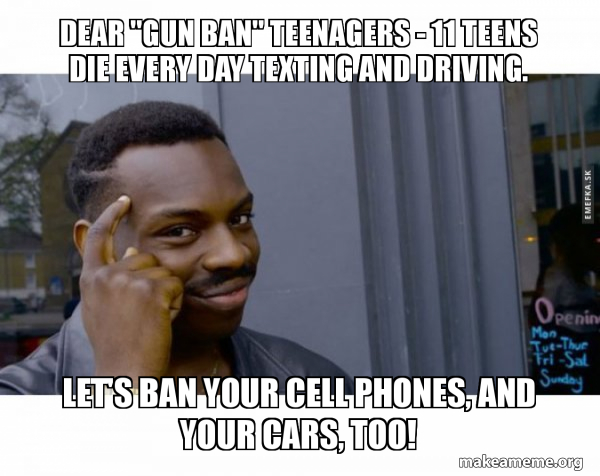 This simple meme recently highlighted some truth for me.

Gun ownership is protected by the 2nd Amendment.
Cell phones and cars are not.
How many are killed by each?
Or even by cigarettes? Or alcohol? Or prescription drugs?
You can look it all up for yourself, in a number of ways, on the Internet.

First of all, and this is important - no matter how someone dies, there is a loss for others. No matter the cause, when we lose a friend or loved one, there is intense pain and grieving. This author in no way wants to diminish or detract at all from the horrific pain that the survivors feel. But what I do want to do is discuss our reactions to these events.

When something horrible happens, it shakes us. The closer we are to the victim, the more intense our reaction might be. We try to make sense out of something that is so often senseless. Sometimes we try to place blame - on the victim, on others, on inanimate objects, even on some form of luck or "karma." It is a difficult time. We feel helpless, but we want to do something. For some, it pushes them over the edge, as they try to cope with the pain and helplessness they feel.

Often, there is a sense of randomness that pervades our thoughts. Why did this happen to them? Why now? What could I have done? How might this have been prevented?

All too often, we humans get carried away by our emotions after a major or especially a traumatic event. When it involves someone we are close to, so much the more. We want to DO SOMETHING to correct the problem, to help prevent this from ever happening again.

In the case of mass shootings, as happened recently in Texas and Ohio, so many people want to blame the guns used in the event. Yes, indeed, if the guns had not been available to these shooters, then these events might not have happened, at least in the same fashion as they did. These killers could have used other means, just as other killers have - like cars, knives, bombs, planes, or even poison.

There is an ongoing, long-term and vicious debate in our country about the role of guns in our society. Ever since the British set out to disarm the early colonists in the second half of the 1700s, guns have been important in our history as a country. Our Founding Fathers knew that guns were important for life, more so for defense than for hunting and fun. They saw such an importance in the ownership of guns (and ammunition) that they declared such as a God-given right in the context of the Bill of Rights. Right up there with freedom of speech and freedom of religion, is the right to defend oneself, and one's loved ones and country with whatever means necessary. It is basic to the foundational principles of our country, including "life, liberty, and the pursuit of happiness" found in the Declaration of Independence.

But wait! Guns can kill people! They are dangerous!

Well, yes, that is true. But so can governments be dangerous, in the form and use of armies. In the last century alone, tens of millions of people were killed by tyrannical Communist and totalitarian governments. Cars kill people, too. So can drugs, and alcohol, and poisonous weed killers, and knives, and baseball bats, and...well, you get the point.

If guns themselves were truly the problem, then all of the 300-PLUS MILLION guns in the U.S. would rise up all by themselves and kill all the people who are against guns! It is rather where guns are restricted that most of the mass shootings occur. It is in some of the places with the strictest laws against guns that so much of the gun violence takes place. How many mass shootings have occurred at gun shows or police conventions? (I can wait while you look that one up!)

The secret that is hidden in plain sight is that GUNS THEMSELVES ARE NOT THE PROBLEM!

Unfortunately, one huge factor in this whole discussion is that the MEDIA (TV, newspapers, etc.) are largely owned and operated by liberal thinkers, who side with Democrat liberal politics all too often. They do not just report "the news" - the facts. They interpret it for their audience with what they share, and how they share it, in so many different ways. It has been shown that there is a narrative, a common script, wherein they not only tell you what has happened from their viewpoint, but also how you should think about it. (After all, Trump is a "racist," don't you know!)

Guns are actually used far more often to prevent bad things from happening than you will ever hear about from the major media, who are focused on eliminating guns as the "cause" of violence. There are a LOT more legal "good-guy" gun owners than bad guys with guns. Otherwise, our streets would be flowing with blood! The "news" likes to highlight the evil use of guns in order to push an agenda (Liberal, Democrat) - against guns and gun ownership.

Can we stop people from killing other people, or even themselves? Simply, no we cannot. Sometimes a tragedy can be prevented from happening if someone (a "good guy") is in the right place at the right time. But all too often, no - we cannot prevent bad things from happening. There are far more accidental deaths at the hands of physicians and misused or misprescribed pharmaceutical drugs than there are from guns and ammunition. Look it up for yourself. Perhaps doctors and pharmacies should be banned, instead of the so-called "assault" rifles.

Politicians would like you to think that they can make laws that will "prevent" horrible things from happening. The truth is this - NO, THEY CANNOT. Criminals do not obey gun laws or laws against murder (or so many other criminal behaviors). Laws cannot prevent anything. Period. Nothing! Criminal behavior is going to happen as long as there are criminals! Accidents happen, and people cannot be controlled by laws. Seat belt laws will not prevent all people from dying in accidents. Politicians want you to believe that they can somehow control that which is uncontrollable, that is, the actions of people. They are looking to win your vote, so they can enter or stay in office.

By the way, it was "uncle" Joe Biden who introduced "Gun-free Zones" in the Senate in 1990. Do you happen to know how many shootings that law has prevented? Being that criminals do not by definition obey laws, my guess is that this law has not prevented a single shooting from happening. If anything, there have been far more school shootings since 1990 than there were before that date! Along the same lines, would you care to guess how many mass shootings there have been at police conventions and gun shows, where there are untold numbers of people carrying loaded weapons? I can wait while you look that one up, too.

"Gun-free Zones" might as well be called "Defenseless Victim Zones!"

One of the most bizarre and horrific things about all of this discussion is that many of the same people crying out so loudly for saving lives by banning guns, are the same ones who create laws or vote for lawmakers who are proudly and loudly in favor of wantonly killing unborn babies in the womb in ABORTION, and calling it "health care for women" and "women's rights."

God have mercy on our nation with respect to our misguided and misinformed people!

Don't just trust your feelings or the news. Consider real facts, study reality, and grow in your understanding. God bless you.