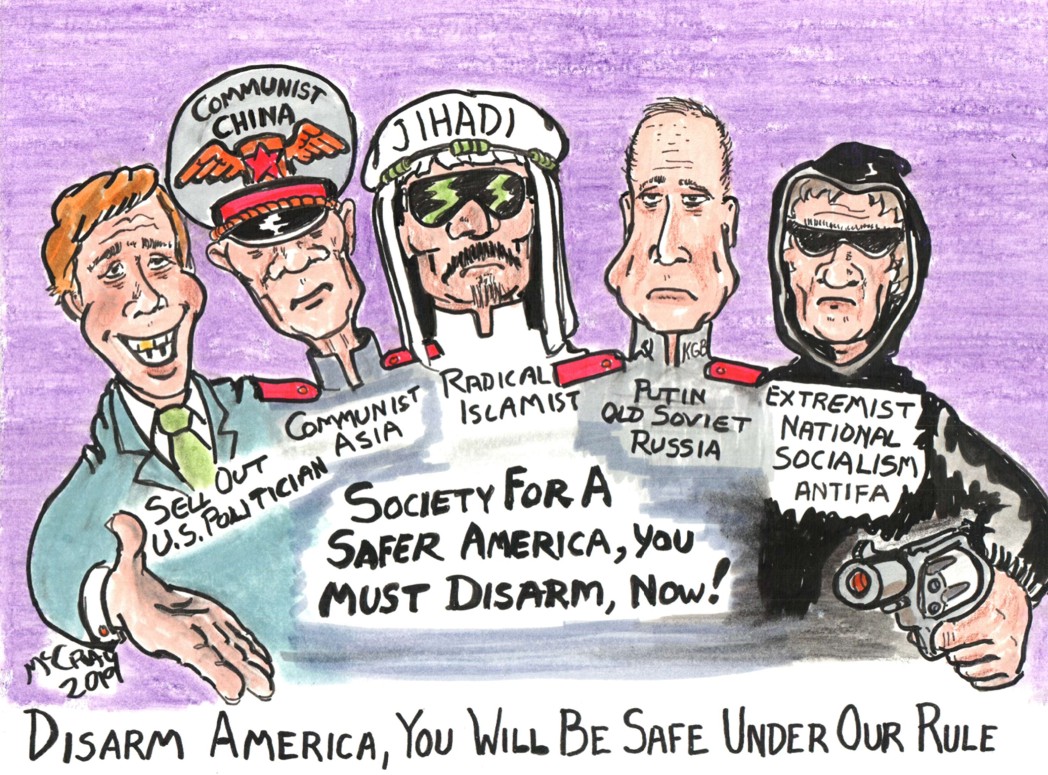 The socialists on the left have been screaming for years that America needs to ban all firearms from the hands of the general public. Think about who will benefit from such a rule - it won’t be the law-abiding American, but the only people who are the usual bad actors of the world. Firearms bans and turn-ins in U.S. cities and other countries always come with an increase in crime. The people who are called criminals are defined as such because they commit crimes, and will not turn in firearms, and they will acquire guns through a black market. Terrorists around the world have proven time and time again that they can get military-grade automatic submachine guns regardless of gun laws. The only victims are the ones who obey their governments and surrender their firearms and are then unable to defend themselves.

Every time there has been a tragedy involving a firearm, liberals have created a big stir about gun control, the sale of firearms sky rockets; people do not spend their hard-earned money to purchase firearms and stockpile ammunition in order to give them up if a ban is enacted. Overnight these law-abiding people will be declared to be outlaws and targeted. All because they believe in the U.S. Constitution and our Bill of Rights. They intend to protect their families and this country, to carry out the purpose of the 2nd Amendment, and if necessary fight against our own out-of-control government.

Over the past few years, you have heard more insane comments from nuts on the left calling for attacks, a civil war against those on the right that won’t knuckle under. This continuing demeaning and insulting rhetoric by the socialist left against people who have done nothing wrong is designed to make people cower and submit, history has proven, and when you push people too far, they will fight back.

All political, governmental, law enforcement, and military take the Oath of Allegiance to the United States, each with slight variations, for the military. (a) Enlistment Oath.—


I, (state name of enlistee), do solemnly swear (or affirm) that I will support and defend the Constitution of the United States against all enemies, foreign and domestic; that I will bear true faith and allegiance to the same; and that I will obey the orders of the President of the United States and the orders of the officers appointed over me, according to regulations and the Uniform Code of Military Justice. So help me God."

Military veterans are never released from that Oath, all former active duty military personnel are first placed on reserve status and years later on the inactive reserve status, subject to recall to active duty at any time. Many in Law Enforcement hold fast to their Oath, so you have to ask the question, who is the left planning to fight for them? We have seen Sheriff Departments in Washington State and the State of Colorado refuse to enforce illegal totalitarian and unconstitutional state laws that violate the 2nd Amendment and violate other rights.

Many on the political left have this erroneous idea that the U.S. Military will deploy to the streets and attack private citizens, go to their homes and seize firearms. But it is forbidden for United States troops to be used against the public. With that said, you can count on a few general officers looking for another star who will try. Most of those in the U.S. military are conservative, deplorables from middle America and believe in the rule of law, the Constitution and the Bill of Rights; also, most of the large military bases are in the south and middle America.

For the lie of socialism to take hold and replace our two-party constitutional government, the people, the unregulated militia (Militia Act 1792/1903, USC10 Chapter 13), the people of the United States must be disarmed. The armed people of the United States are the last line of defense for our country. In World War II, Japanese leaders knew they could not invade the U.S. because they could visualize a .22 caliber rifle behind every blade of grass. The Founding Fathers recognized the right of the people to be armed, as they proved in the Revolutionary War an armed people are a free people, a disarmed people are slaves, socialism is slavery.

Disarming people who have done nothing wrong, is a direct infringement under the 2nd Amendment, the phrase, “the right of the people to keep and bear arms shall not be infringed.” To curtail ammunition, control which firearms people can have, and where they are carried are violations of the 2nd Amendment.

No court, and that includes the Supreme Court, has a right to violate this long-standing pillar of our Constitutional rights, but as everyone knows, rules do not apply to the Socialist left. In the military, whenever an order was issued that was way outside the standing structure of rules and standing orders, it was considered an unlawful order. Any court or governmental body that states they are going to ignore the standing law and violate your constitutional rights, or take your rights away, their orders or their so-called laws are also unlawful and should be vigorously opposed. Fail to do so and you have surrendered your rights and no longer have a voice on the issue, it’s over.