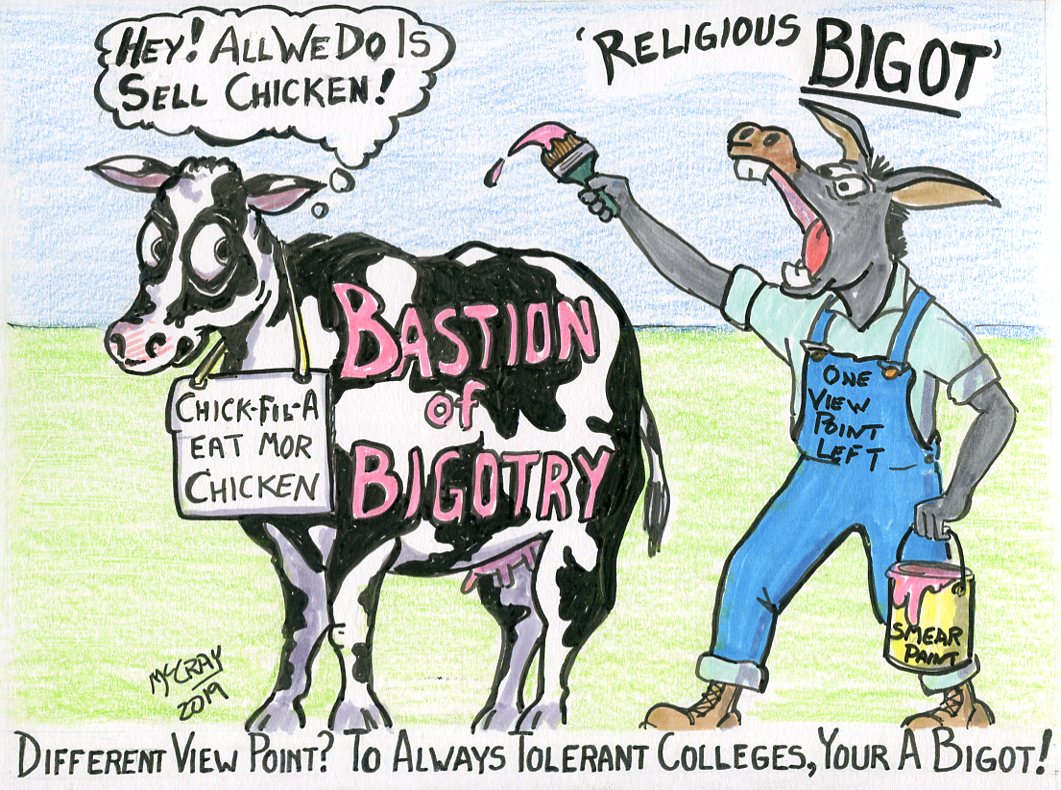 Have a viewpoint that is different from the radical socialist left and they attack like a pack of jackals, the supposedly open and tolerant colleges and universities have turned vicious. Their target this time, is the fast-food giant, Chick-Fil-A, all because the owners are Christian, and their business is closed on Sunday so their staff can attend a church if they so choose. These supposedly open, inclusive, and diverse professors are now actively discriminating and want the schools to deny on-campus space for the food outlet.

Some of the staff of Kansas University are claiming that the Chick-Fil-A franchise violates “safety and inclusion.” And as punishment they want the food chain banned from their campus for being a “bastion of bigotry.” This is what you get for the cost of tuition, babbling baloney created in the dark morass of the teacher’s lounge. In a letter written to the Kansas University Administration by the ‘Sexuality and Gender Diversity Faculty and Council,’ charged that the food chain fosters hate and the administration was “more concerned about money and corporate sponsorship than the physical, emotional, and mental well-being of marginalized and LGBTQ people.” Maybe this kooky, very noisy minority should leave politics alone and focus on whatever basket weaving courses they are supposed to be teaching. This is nothing more than a mob action of extremely thin skin special interest groups that have no tolerance for any other viewpoint, trying to crush anything that they consider as opposition.

Like most extremists, who see themselves as some kind of warrior on a great quest, who view the world through a toilet paper tube. They only see their chosen viewpoint and disregard any other opinion regardless of how sensible, and react violently to any other viewpoint. Their problem with Chick-Fil-A has nothing to do with chicken dinner sales but has everything to do with the owner’s religion as a Christian and his belief in traditional marriage.

Remember, Socialism is a nothing more than a smiley face on Communism, all of which is derived from the Communist Manifesto written by Karl Marx and Friedrick Engles in 1848. The Manifesto was a Utopian Idea like many others of that time, that was put forth as a response to the harsh conditions in England during the Industrial Revolution. The ideas of equality for all sounds good and is the perfect tool for the power-hungry scam artists, to manipulate the gullible into creating their path to rule others. Socialism has been tried in over 50 countries and has been a miserable failure, costing the lives of millions.

This sudden flare-up of socialism in the U.S. has been building for years, it doesn’t matter whether it’s at the local, state, or national level, the push has been a steady effort to reduce your rights, giving the left more power. The slow and steady erosion has gone largely unnoticed, till the left recoiled at the loss of Hillary Clinton’s presidential campaign to President Donald Trump. Now the left is frantic, attacking in all directions, after seeing their grip starting to slip as President Trump is stopping and undoing many of the controlling regulations they were able to impose over several decades.

For the left to make socialism appealing to the population the economy has to be failing, with large unemployment numbers and with no hope of improvement. President Trump has done the opposite, helping to build a vibrant economy and raise employment numbers to unheard-of highs; the left is becoming desperate and have come out in the open demanding control and even threatening the Supreme Court. The socialists in Congress that have been masquerading as Democrats for years have made their true desires of destroying our two-party government and their dislike for average America known; now it’s time to replace them.

Now it’s up to those who oppose this socialist insanity to educate as many voters as possible, to offset the left's lies and threats before the 2020 national election - this election is for all of the marbles.