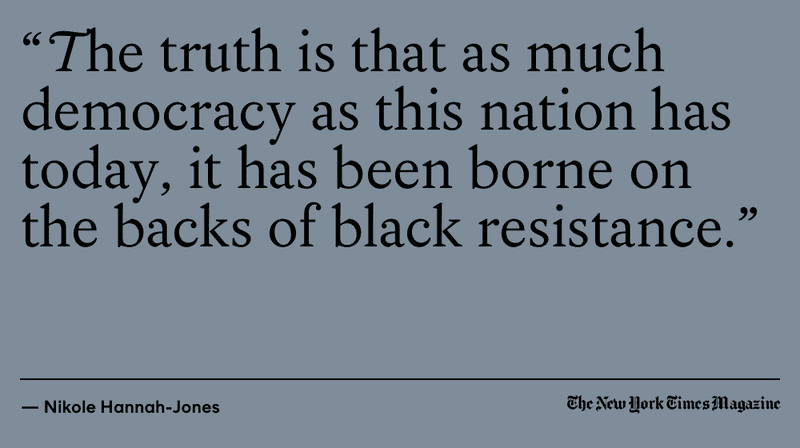 Really?
Major papers such as USA TODAY, The New York Times, the Chicago Tribune, and others have initiated major efforts to celebrate 400 years since the first Blacks were sold at Jamestown - a "1619 Project." They pull off the scab of slavery in prose, poetry, and pictures, a story often with pathos, pain, and prejudice. It seems to me that they have a clear agenda: tie Trump (and all whites) to slavery with all its curses and promote reparations thereby satisfying all the race baiters and Progressives - but then I repeat myself.

I remind my readers that The New York Times editor recently admitted, “Look, we blew it on Russian collusion, didn't work. Now we're going to go to racism, that's our new model. The next two years will be Trump and racism.” That secretly recorded confession was followed with the slavery series.

It’s called “guilt by association” but Trump was not associated with slavery - neither was I.

The Times’ Nikole Hannah-Jones revealed in her “America Wasn’t a Democracy, Until Black Americans Made It One,” their second duplicitous motive. “If nothing else, I hope it shows the world that a bipartisan commission to study the issue of reparations is necessary and way past due.”

The Times’ series is interesting with some good information but is generally a handbook for radical racists who have more zeal than knowledge and more time than discretion.

Principled journalists resolve to never write a lie and never refuse to publish the truth; however, this author has failed to honor that concept. She has woven disturbing truth with much error to express a racist agenda - blame 'Whitey' and generalize leaving a scent of truth regarding the vile world of slavery to paint all living whites as villains and all living blacks as victims.

Nikole charged, “the United States simply would not exist without us.” That is an asinine, arrogant, and not accurate statement but she will not be required to give an account for such shallow and untrue balderdash, because she is a minority and can plead the prestige of the Times. Of course, Virginia landowners would have been forced to work smaller tobacco farms, plant other crops, and make a smaller profit with the white indentured servants who quickly worked out of their contracts. Additionally, we would not have the positive and negative contributions that accrued from slavery.

Wiping the Kool-Aid from her quivering lips the author declared that black slaves “made Wall Street a thriving banking, insurance, and trading sector and New York City the financial capital of the world.” If black slaves were essential to our success, why has that not happened in any other nation on earth? She failed to point out any African nation that is stable, secure, and successful because none exists.

Repeatedly, we have been told that America’s success is because it was built and sustained upon the backs of slaves and oppressive practices. But that dog won’t hunt. If black slavery is responsible for America’s greatness, where are all the successful black nations?

The wheel was unknown to sub-Saharan Africa as late as the mid-1800s according to Oxford University Professor John Baker in his book, Race! Furthermore, the diaries of Dr. David Livingstone, famous missionary, explorer, and medical doctor in Africa (some of whose steps my wife and I have followed) describe thousands of Africans coming out of their villages to see his “vehicles in motion and thus for the first time to observe the rotation of a wheel.” Are racists trying to get us to believe that a people who didn’t have the wheel less than 200 years ago could be responsible for America’s success?

Of course, admitting that unpleasant fact makes me a racist in the twisted minds of racists - black and white.

Nikole charged that our founding fathers did not believe in the Constitution because of the infamous three-fifths clause. To determine representation each slave was counted less than one.

This did not apply to free blacks. Of course, our founders believed the words; however, they knew if they were to have a union, the compromise was essential. Their words “all men are created equal” were an acknowledgment of goals that would become reality when politically possible. It has now been accomplished even to the extent that it now seems some minorities are more than equal.

The writer declared, “Without the idealistic, strenuous, and patriotic efforts of black Americans, our democracy today would most likely look very different - it might not be a democracy at all.” Well, we are a Republic, not a democracy, but without quibbling over that, her self-serving statement is a senseless, silly slap on the back. She insists that blacks have as much claim to be “founding fathers” as Jefferson, Madison, Washington! Sure.

She characterized Jefferson’s Monticello as a “forced-labor camp” but evidently, she knows nothing about such camps and little about Monticello. While her article revealed some worthwhile information, it was also a racist promotion of Black Superiority.

She charged that American slavery was a “brutal system of slavery unlike anything that had existed in the world before. Chattel slavery was not conditional but racial.” She was wrong, since slavery was not automatically “racial” but economic. The plantation owners did not necessarily hate the slaves, it was an economic matter - if they did not have workers, it meant financial disaster. Similar to Apartheid in South Africa, it was a matter of survival. While that did not justify the ownership of any person, race was not a determinant to slavery.

Furthermore, evidently, Nikole has little knowledge of world slavery. It is common knowledge that slavery in Brazil and the Caribbean was much more oppressive than in America. While sadistic slave owners always existed, they were not the norm in America; after all, slaves were an investment. Only a fool would destroy his own “property.” Some plantation owners provided days off, bonuses, and retirement plans.

Nikole suggested that America “was founded not as a democracy but as a slavocracy.” Time after time she made sweeping general statements that contain a smattering of truth but are simply incorrect, irresponsible, and inflammatory.

This series clearly teaches that only whites can be racists and are required to be super sensitive to their innate racism; however, blacks are never, ever racists but should always be super sensitive to and magnify their victimization. And when whites discuss racism, they must do so in a very subservient and contrite, almost apologetic tone. That is the message of this series.

Taking a deep breath, Nikole declared, “Anti-black racism runs in the very DNA of this country, as does the belief, so well articulated by Lincoln, that black people are the obstacle to national unity.” When one looks at the statements of black race-baiters including leading white politicians it seems anti-white racism now runs in the very DNA of America. And articles such as these only exacerbate the racial problem.

She closed her interesting, but highly-biased article with this: “But it was by virtue of our bondage that we became the most American of all.” Say what? “Most American of all!” Sounds exactly like, dare I say it, Black Supremacy.

No, that can’t be. Blacks always tell the truth, never twist and manipulate facts, and never express bigotry even though such people are as easily found in the media and academia as a bowling ball in a bathtub.

I ask the Times' editor, “Have you no sense of decency, sir? At long last, have you left no sense of decency?” A quality organization would not produce a sham, a shame, and a scheme for any reason let alone promote black supremacy and advance a political agenda!