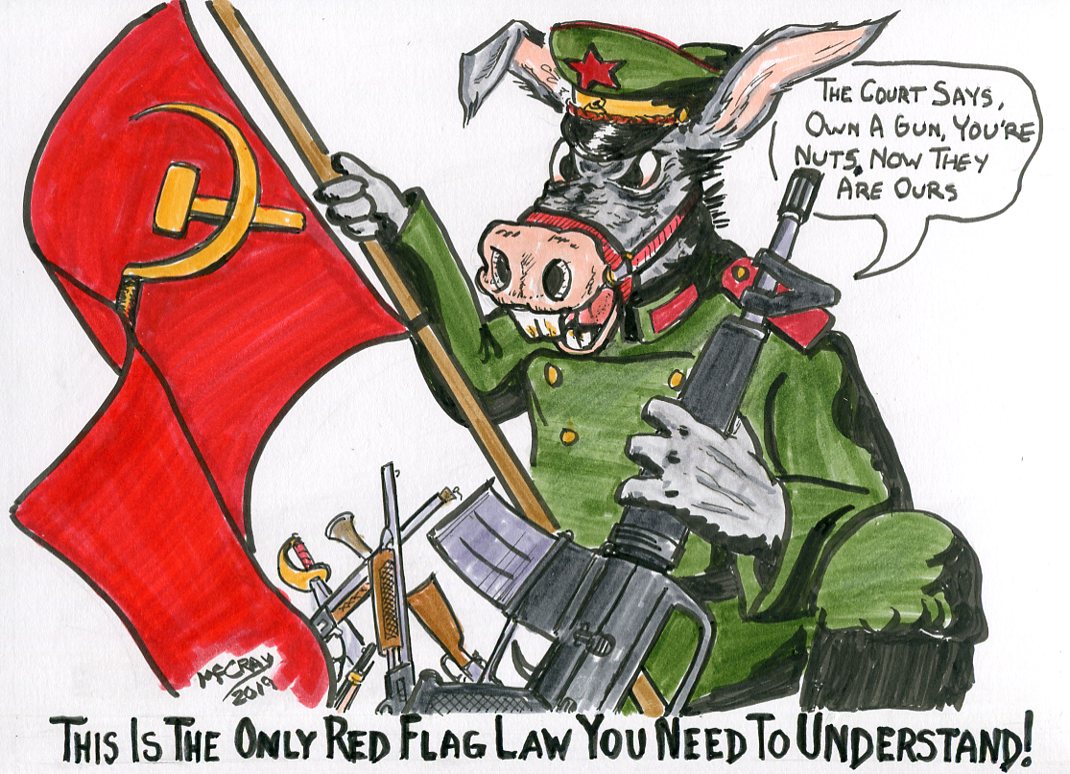 Red Flag Laws sounds like a great idea, creating a law to flag potential mass shooters, it would target people who have made threats and have exhibited bizarre behavior that might be considered threating.
In the case of the Parkland, Florida high school murderer Nicholas Cruz, this may have worked, considering the shooter Cruz had contact with law enforcement over 30 times and was kicked out of school for his dangerous behavior. The system failed because law enforcement chose not to take any action against the shooter, local government was operating under the Obama program that went soft on dangerous offenders in order to give them a clean start when they became adults.

Going with the track record of many activist judges, whose rulings are based on their political leanings ( aka – social justice ) and not written law, you can expect any excuse will be used to seize firearms. With the frailty of the snowflake generation now moving into the adult world, you can expect them to whine about anything. It may be they don’t like their neighbor yelling at them for their dog pooping in the neighbor’s yard. He scares them, he must be dangerous and he must be checked for guns, and if the gun owner objects, he must go to jail to be re-educated. Sound ludicrous, but considering how broad some of the proposed Red Flag Laws seem to be and the flakiness of the left, anything is possible.

Remember, the people proposing many of these laws are the same people who want the total disarmament of the public, the same people who want a single party governmental system for the United States, it’s called Socialism. If you’re expecting them to function with clean hands, as a fair and honest broker, you're dreaming as everyone concerned has an agenda.

President Trump has made a reference to the need to bring back the state psychiatric hospitals, which would provide the necessary treatment and confinement for extreme cases. We have been dealing with this mess for over twenty years when states started dumping psych cases on the street and then closed the state hospitals; the homeless population mushroomed at that time and has gotten worse. If the Nicholas Cruz case had been handled correctly, Cruz should have been confined under Florida’s Baker Act for evaluation. Considering the volatility exhibited by Cruz, he could have been confined at a state mental hospital.

Another problem with a Red Flag Law is the gun owner not getting his guns back without having to jump through hoops and having to go to court. In cases when firearms were confiscated by law enforcement, the care that is used, meaning respecting the owner’s property runs the gamut - from properly tagged and racked firearms to throwing the guns in a pile on a dirty damp concrete floor and returned a year or two later by a snarky officer, rusted and broken. Just as there will be abuses by the courts in Red Flagging an individual, there will be abuses by law enforcement in handling the gun owner and his property.

The DNC Presidential debate in Houston, Texas on 10 September 2019, made banning firearms a key point by many candidates for why you should vote for them. The Texas representative, Robert Francis O’Rourke revealed the left’s real plan: in answering a question about guns, responded with a loud vociferous statement of “HELL YES, We’re going to take your AR-15s, your AK-47s!!”  The left has been nibbling away at our gun rights for decades, O’Rourke peeled back the curtain and exposed the left's goal. Total disarmament, coupled with their socialist programs will prevent the public from protecting itself from our own government or the street thugs that do their bidding.

We are at the same point as Germany was in 1932, when the National Socialist German Workers Party was bullying their way to power using their street thugs, the Brown Shirted Storm Troopers, to control the streets. Aided by their backers in a polarized parliament, and the party-supporting news media, using propaganda to demonize and demean any opponents into silence.

A year later, in 1933 they came to power and one of the first actions taken by their leader, Adolph Hitler was to disarm the population, preventing any grassroots armed revolts; the rest, as they say, is history.

We have a choice to stop this socialist insanity or repeat history, we won’t have another country that will stop and defeat a modern NAZI police state, who will then return control of our country back to the people. Like the Allies of World War 2, when the United States, Britain, and Russia stopped the NAZI war machine at the cost of millions of lives. Unlike then, there is no righteous country to save us, we are on our own.