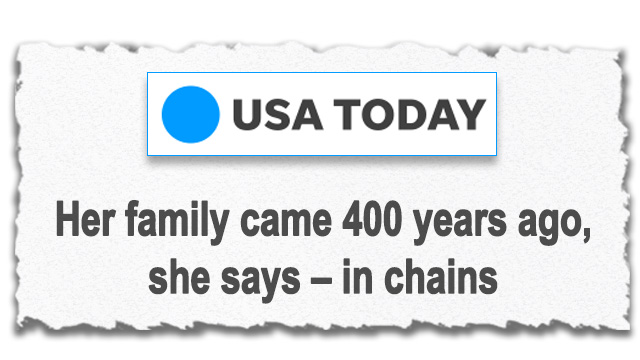 Like The New York Times’ series, USA TODAY’s major feel-good series, 1619: Searching for Answers could produce more white guilt than any revelations about slavery. Both series were a sham, a shame, and a scheme to make living Americans feel guilt for slavery! It was an attempt to provide a face to the curse of slavery in America: that of Wanda Tucker who believes she is the ancestor of one of the 20 Angolan slaves sold in America in 1619.

She may be right but, of course, she is probably wrong. However, the paper - with missionary zeal - does a yeoman’s job to support her dreams, desires, and delusions even though it is a hopeless and impossible task.

Wanda is an ordained Baptist minister and college professor whose grandiose aspirations for a slave connection if accepted as true might promote her into historical significance. She has about the same chance of proving her famous ancestry as one of the ranting Democrats has of becoming President.

Angola is a huge nation roughly an 800 mile square along Africa’s western Atlantic Coast made up of rugged highlands, a huge plateau, farmlands, a desert, and mountains. It is rich in wild animal life such as giraffes, buffaloes, zebras, gorillas, chimpanzees, black rhinoceros, wildebeests, lions, hyenas, and leopards.

It also has a vast number of two-legged animals known as political leaders although they are thugs, thieves, and totalitarians. The nation is run by former general Joao Lourenco who was trained in Moscow; and the media, the money, and the military are controlled by him and the Marxist People's Movement for the Liberation of Angola (MPLA). Protestors are not treated well.

The country is rich in precious gems, metals, diamonds, gold, iron, cotton, coffee, and plenty of farmland. The nation has abundant natural resources, and it ranks among the highest of the oil-producing countries in sub-Saharan Africa. Most of the oil revenues go to the government resulting in a long simmering reaction toward the money grabbers.

The first of the lengthy series with a substantial amount of errors, exaggerations, and embellishments is loaded with feel-good revisionist history to give Blacks a feeling of importance and produce a wagonload of guilt on living Whites who have no culpability.

The article was headed, “Wanda Tucker's spiritual journey to where the slave trade began.” No, that despicable trade started thousands of years earlier and race had nothing to do with it. Slavery was usually a result of wars and most slaves have been white.

Continuing Tucker’s search for her ancestor, Deborah Barfield Berry and Kelley Benham French added, “Wanda's family invokes a deep sense of pride whether it is provable or not.” How can one have pride, especially a “deep sense of pride” in an illusion or maybe delusion; for sure, not a conclusion?

The authors opined, “Her academic training never undermined her faith in her family’s history. Just because it wasn’t on paper didn’t mean it wasn’t true.” However, there is not a scintilla of proof that it was her family’s history. Moreover, it is also possibly true that one of the Socialist candidates could become president but don’t bet the farm on it.

The white Portuguese officials in Angola traded guns in return for slaves and with superior weapons, black chiefs captured and sold natives on a far larger scale providing funds to provoke intertribal warfare that produced even more slaves.

We are told, “Historians had learned fairly recently that the first African-Americans had been captured here.” Note "captured," but not captured by black chiefs and sold to unscrupulous Portuguese slavers. The article did not mention that Angola was the home of Anthony Johnson, a black man who became a large landowner in Jamestown and owned many slaves, including some Whites. Just an oversite.

The article managed to work in a criticism of President Trump’s comments on Baltimore’s problems and his criticism of the four “women of color.” Wanda allegedly thought of all that and “saw brown children in cages at the U.S. and Mexico border. She saw black boys being shot in the street.”

No, Wanda “saw” none of that. In her mind’s eye, she saw what she wanted to see - what she was looking for.

Wow, such literary gymnastics deserve a Pulitzer Prize but since Trump is blamed for mass shootings, the border mess, bad race relations, and the coming recession, that’s reasonable to everyone gazing at their navel standing in far left field. After all, everyone knows President Trump is responsible for sunspots, dandruff, bad weather, arthritis, and hot flashes.

The USA TODAY article opined about the black “queen,” “Njinga, who came to power [in the 1600s]…is the most awe-inspiring of the Angolan ancestors….Something stirred in Wanda, seeing an entire country honor a black woman for her leadership and strength.”  Njinga was ambassador to  the Portuguese and later assumed power over the kingdoms after the death of her brother.

The August paper did not reveal that many believe that Njinga was involved with her brother’s suicide and that was the reason Portuguese officials refused to honor her right to succeed her dead brother. Nor that she took control of her brother’s young son, then allegedly had him killed for his “impudence.” Nor did the article reveal Njinga was a self-crowned “queen” and according to Jewish feminist Aurora Levins Morales, "she was also an elite woman living off the labor of others, murdered her brother and his children, fought other African people on behalf of the Portuguese, and collaborated in the slave trade.”

However, the self-made queen was “awe-inspiring” according to the paper.

The notorious Marquis de Sade’s Philosophy in the Boudoir, reveals how Njinga was a woman who "immolated her lovers." De Sade's reference for this comes from History of Zangua, Queen of Angola. This book claims that after Njinga became queen, she acquired an all-male harem who were forced to dress in women’s clothing - as did her male servants. According to Rejected Princesses, the men “fought to the death in order to spend the night with her and, after a single night of lovemaking, were put to death.”

USA Today identified Njinga as “awe-inspiring;” however, my takeaway from the article was that slavery was primarily perpetuated by Americans and peculiarly done by Whites and both concepts are dishonest, divisive, and destructive to Black-White relations. It seems anything black is acceptable, approvable, even to be applauded; anything white is to be considered privileged, pampered, and predictable.

But don’t honest, sane people consider that racism? No, those who discriminate against truth have no problem accepting such disingenuousness.

Such articles in the leftist media are a sham, a shame, and a scheme to make minorities feel good about their ancestral past. Even if true, that doesn’t provide cover for not accepting their personal and collective failures in the present.

No wonder America is a mess - because historians, writers, and the media fail to follow the principled maxim - never report a lie and never refuse to publish the truth. Moreover, for a newspaper to kill so many trees to promote a warped version of history to further their leftist ideology is both disgusting and hypocritical.

But the fake news groups are used to that.

I hope Wanda discovers she is a descendant from one of the original black slaves but she doesn’t really need that since she has already proved that she doesn’t need to be propped up by anyone, or anything, anyhow.