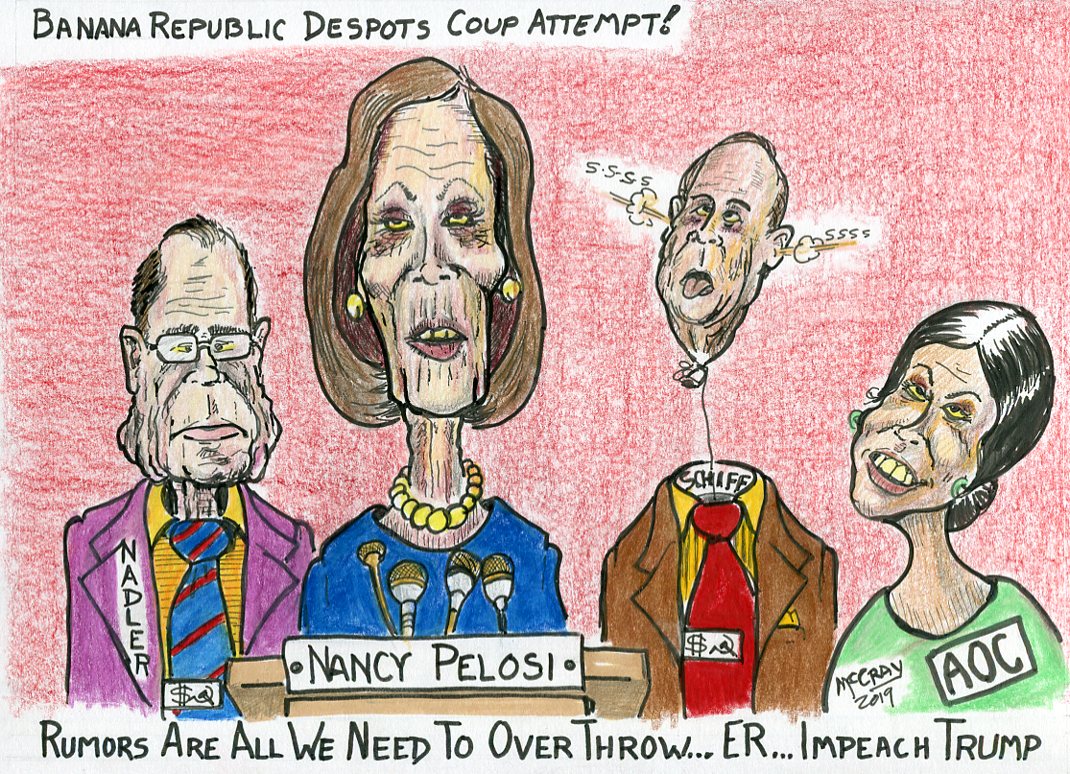 The inmates of the Emerald City’s insane asylum are at it again; IMPEACH, IMPEACH, they cry and scream. Those of shallow mind, the inept, confused, socialist, and deranged are spinning their broken record of impeachment again, believing if we tell this lie loud enough and often enough they will be believed. The record that sang the song of Russia, Russia, and Russia, has been flipped over and now it sings Ukraine, Ukraine, and Ukraine, it is still broken. The reality is they are proving to the world why they should be committed, because only a nut would keep doing the same thing over and over, expecting a different result.

Now it’s the words of a so-called whistleblower accusing President Trump of violating his office, extorting a quid pro quo from the President of Ukraine. As it turns out this whistleblower is a biased partisan, who did not hear the conversation first-hand, but is reporting rumors. This whistleblower is reported to have not followed proper reporting procedures within the intelligence community, violating regulations. This is developing an odor that smells like a pre-planned hit job.

What’s behind it, what is really going on? The so-called Democrats are absolutely frantic, they know Trump will be re-elected and the only way to stop him is to remove him from office. Also, they are worried that their senior member, Joe Biden, the former vice president and presidential candidate’s corruption that is being exposed. For this party, it’s not just Joe Biden that is being threatened, it’s many of the upper-level Democrats in office and the political party that is in jeopardy. The dense fog of alleged payoffs and outright corruption has been associated with the Presidency of Obama and other Democrat leaders in Congress for a long time. Bragging by Joe Biden, on 23 Jan 2018, about his interceding with the Government of Ukraine, threatening to withhold One Billion dollars in financial aid, unless they remove the prosecutor investigating Biden’s son, Hunter Biden, who sat on the board of a corporation in Ukraine. This showcased a quid pro quo corrupt action by the then Vice President, exposing the seamy side of corrupt politicians.

President Trump countered the Democrats' accusation of criminal actions by Nancy Pelosi and her band of loons, by releasing a transcript of his discussion with Ukraine’s President Volodymyr Zelensky. Nowhere in the transcript is there a reference to pressure, a quid pro quo for money or anything else. President Trump asked Ukraine’s President to provide information regarding their investigation of the Hunter Biden’s Corporation, and the information goes to the Department of Justice. The comments regarding an investigation were mostly related to the 2016 election and the hacking of the DNC server. This action by Trump was perfectly legal as the top law enforcement officer asking the government of another country for any pertinent information regarding an investigation involving a U.S. Citizen, and the President protecting our election process.

The lunacy has reached a new level when Committee Chair Adam Schiff (D-Ca) spewed out one incendiary accusation after another, calling it “a classic mafia-like shakedown of a foreign leader,” that the President was threatening Ukraine with withholding military aid, etc. There is nothing remotely close in the transcript, it was one lie after another by Schiff, who seemed to be inventing as he was speaking.

This is like watching a cat trying to dig a cat hole on concrete, a lot of energy is expended with no results. They desperately want people to think of Trump as Godzilla attacking Tokyo, and the socialists in the Democrats Party are riding to the rescue. To say the Democrats are suffering from mass derangement is being polite, this is an attempted coup d'état, a blatant effort to overthrow a duly elected President from office, and establish their socialist government, all because the so-called Democrats can’t win at the ballot box.