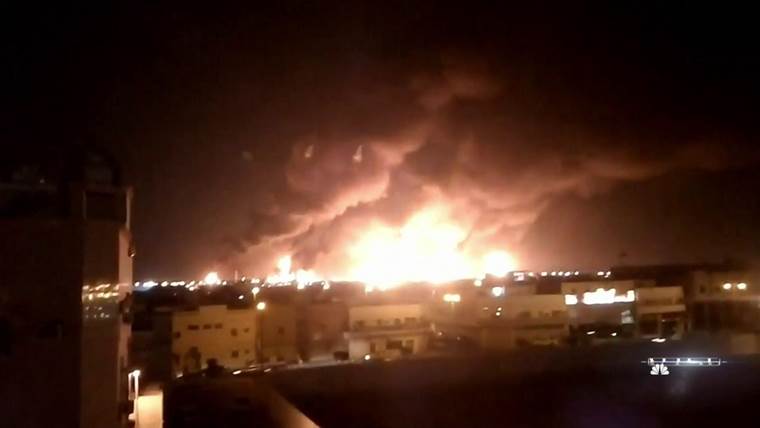 The BBC headline on September 15 (2019) was “US blames Iran for drone strikes on two sites” and Saudi Arabia's energy minister reported the attack affected about half their oil production. The bad guys, the “purveyors of peace” in the Middle East, are at it again and the U.S. and President Trump “spoke with Crown Prince Mohammad bin Salman to offer U.S. support for Saudi Arabia’s defense.” Trump says America is “locked and loaded” to come to Saudi Arabia’s aid.

That is tacit permission for the war hawks to come out of their teepees and beat the drums for military action - old men sending young men to die in military action that should be handled by fellow-Muslims.

While all people of good want to see tyrants assume room temperature as they go into eternity to be greeted by whomever, it is not wise for the U.S. to assume the role of peacekeeper of the world. I believe there is another organization with that mandate that meets on the East River in New York City. Let Muslims fight their own battles. The choice between the two sides is not a choice between good and evil, but between much evil and more evil.

I will not be angry, agitated, or alarmed if Saudi Arabia’s oil wells become dry holes in the desert! Neither do I care if the price of oil drops to $10.00 a barrel and they end up pouring it on their breakfast pancakes. Neither do I care if a regime change takes place in Iran but it is not America’s responsibility to effect that change. It is time for Muslim nations to settle their own problems. No one made America the paladin of peace or the world’s banker.

This is not a plea for isolationism but a plea for consistency. America has not been attacked or seriously threatened by this deplorable action. So Muslims should solve their own problems? After all, they are equipped with sophisticated weapons - sold to Saudi by America and Iran by Russia. No one would declare that any other nation has a right to effect regime change in America because each nation is sovereign. Look at the furor of the alleged Russian Collusion in our 2016 election.

Fanatical, committed Muslims are dangerous, devious, and deceitful people and we are fools to waltz into the crossfire. The free world should permit these countries to work out their own differences, remove their own totalitarian leaders, and worship however they choose. The U.S. can cheer the good guys (better guys) but we don’t have the money, manpower, or moral authority to get involved.

No one elected America as the world’s moral and humanitarian watchdog and we are arrogant, asinine, and absurd to assume that because we have the might, we, therefore, have the right to do so.

Why should Americans be outraged about an attack of one Muslim nation on another while other Muslim leaders choose sides and stand around sucking their thumbs acting as cheerleaders without getting involved?

Meanwhile, an assortment of U.S. politicians are pounding the war drums. But then, older politicians have always managed to find the guts and money to send younger men to fight their wars.

In addition to the Arab League, the UN might provide some leadership in world squabbles since they promised to be a peace-keeping organization. Heaven knows we have given them enough money to expect them to do what they were organized to do - help provide peace and protection, and promote prosperity.

Are we to do what others are responsible to do? Isn’t the United Nations supposed to keep the peace, protect the innocent, and bring the bad guys to justice? Alternatively, doesn’t the pecking order demand that surrounding Muslim nations bring offenders to justice?

One must remember that Iran is supported by Russia, Syria, and the terrorist group Hezbollah. Let the bloody bullies bang their heads together and resolve their own differences. If Israel wants to get involved, that is their business. Let the Middle East nations that are threatened take whatever side they choose. It will not be a principled decision since there is no noble principle involved, only violent religious and political hatred. All factions are thugs, thieves, tyrants, and terrorists.

To those who say it is our fight, I ask if we are to get involved in every battle on earth. We would be wise to heed Winston Churchill who said, “To jaw-jaw is always better than to war-war.”