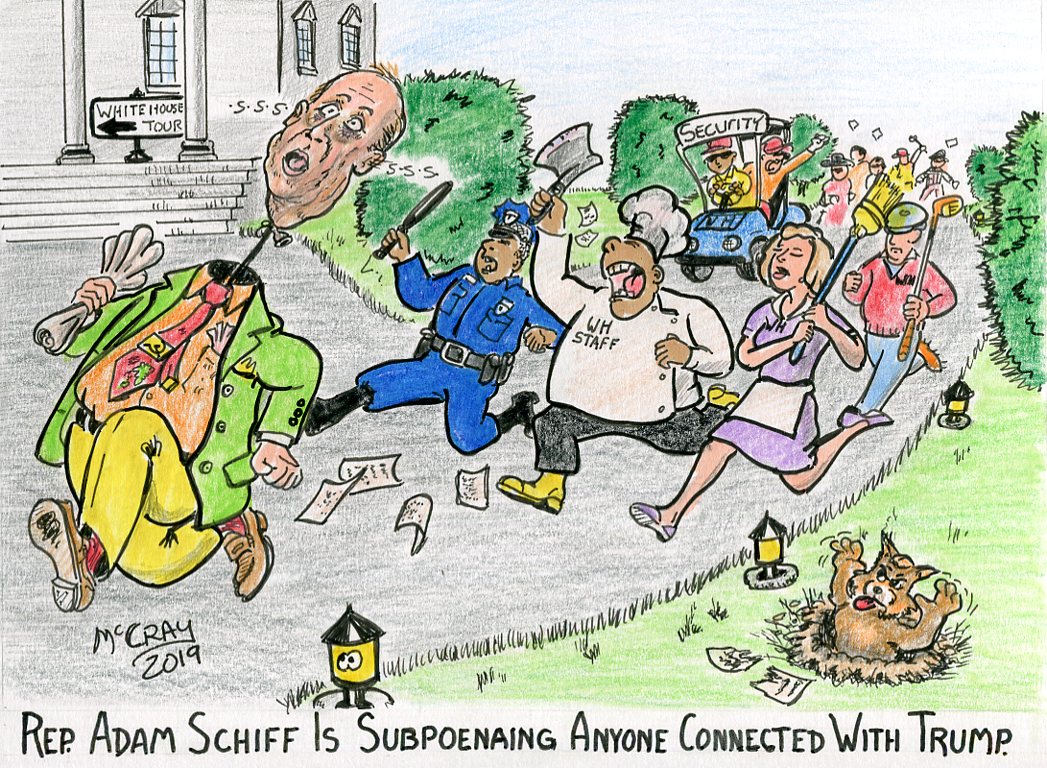 If you don’t have a real case of an illegal act by President Trump, then harass, harass, and harass, put out loads of lies, intimidate by throwing out subpoenas like candy, and misrepresent the actions of others. Make sure co-conspirators in the media jack up the pressure with false accusations. This has been the modus operandi of Rep. Adam Schiff (D-CA) and the other socialists that have wormed their way into the Democrat Party and the media. Their target on the surface is President Donald Trump and his administration, but in reality, it’s anyone that opposes their desire to take over the government.

In fabricating an impeachment against President Trump, Rep. Schiff has been re-creating the Brett Kavanaugh confirmation hearing parade of false witnesses. Schiff has been caught in one lie after another, most recently stating what he called a parody of President Trump's phone call with the President of Ukraine. This parody sounded like a bad movie script from a 1930’s mobster movie, which he read into the congressional record as fact. Now he claims he has multiple whistleblowers and is stating that he has all of this evidence that never materializes. If anyone is impeached, it should be Schiff.

Rep. Rashida Tlaib (D-MI), one of the loose cannons of the “Squad” is discussing how to arrest and confine Trump and members of the Trump Administration. This is what we have seen in the old Soviet Union, North Korea, and China, where politicians fall out of favor with their government - first comes the show trial and then they disappear. This kind of activity shows how close this country is to the edge of the abyss. If any of these maniacs ever gets control of our government, the Constitution and the Bill of Rights are in the shredder.

Our two-party governmental system is not working, both parties are supposed to be working for the betterment of the country, agreeing to disagree and argue their viewpoint. Today’s so-called Democrat Party’s focus is the destruction and control of the Republican Party, the Democrat Party is now run by un-American National Socialists who are pushing for a nationalist single-party control of the United States Government. This can’t be tolerated, the result will be a Police State, much like the dictatorship of Venezuela where the people of that country are starving and destitute. Their leader Nicolas Maduro is now a puppet of Russian President Putin, and a division of 25,000 Cuban soldiers surround Maduro for his security - his own military can’t be trusted to protect him. The world’s usual bad actors of Iran and China have their people in Venezuela to capitalize on the situation.

In the 1970s, during my assignment with the U.S. Army in Germany, I made multiple trips into East Germany which was controlled by the socialist Russian Soviet Union. It was a run-down dump with buildings still showing the effects of the fighting from World War 2. The East Germans lived in a constant state of fear of their secret police, the Stasi, which was molded after the Russian secret police, the KGB. The unfortunate victims were jerked off the street and interrogated for days at a time for the smallest infractions or for no reason other than instilling fear into the population.

The Stasi was supervised by a ranking Russian KGB Officer, at the time when the Berlin Wall collapsed in 1989 - that KGB Officer was Col. Vladimir Putin, the present-day strongman leader of Russia. The East Germans lived with rationing and limited products available for purchase, earning potential and advancement was low. Whenever the free market system that is used by the capitalist countries is suppressed or eliminated, the quality of life is bad, people are held down and crushed, there is no incentive to work or to improve, it always ends in a dictatorship.

Whenever the people revolt against totalitarian states like China and the old Russian Soviet Union, the police and military attack. Hungary in 1956, Czechoslovakia in 1968, Tiananmen Square China in 1989, and now Hong Kong is being smashed now by the Communist Chinese, suffering under the Iron Fist of a totalitarian Maoist government. This is what the socialist left has to offer, your protected legal rights disappear and you’re subjected to the whims of a political officer. Your choice of political leaders in our two-party system is gone, replaced with a single political party, in a totalitarian government of National Socialism.