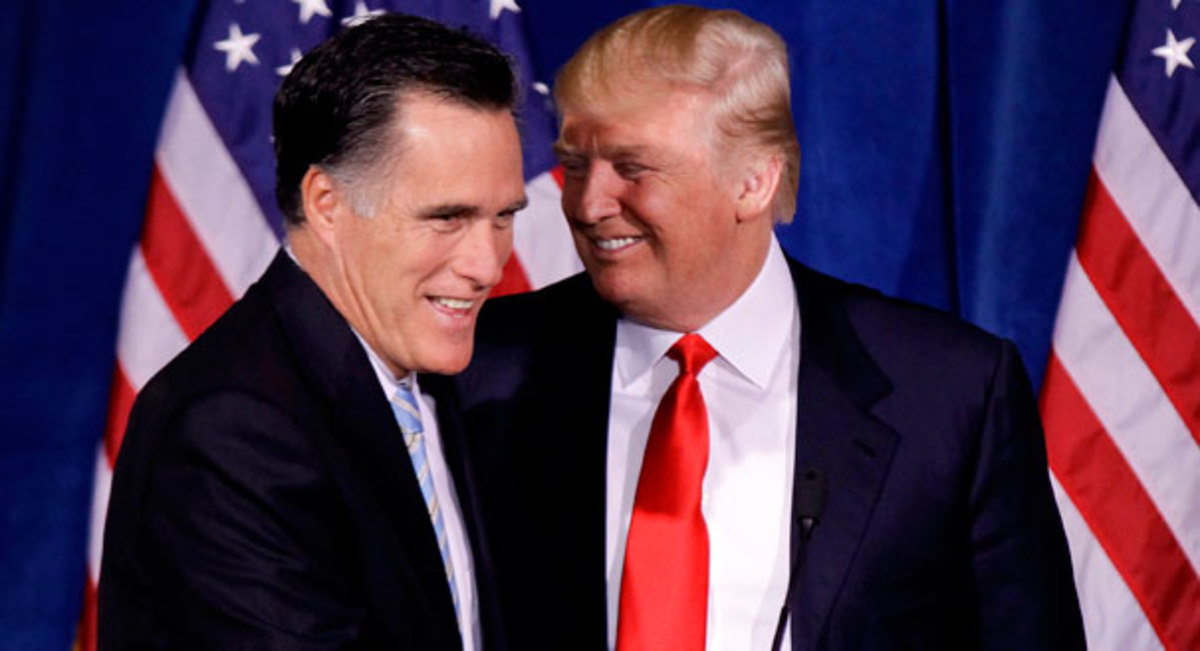 In the 2012 general election, Romney had plenty of opportunities to win the race, but played defense during the final weeks of the campaign and snatched defeat from the jaws of victory.

Ultimately, Romney proved to be a horrible candidate. He should have beaten a vulnerable President Barack Obama but listened to his consultants and was non-confrontational in the last two debates. When Obama aggressively attacked, Romney refused to respond appropriately. In fact, he also showed his weaknesses as a candidate in 2008 when he lost the GOP presidential nomination to a very beatable Republican opponent, the late U.S. Senator John McCain.

Romney has always had a hard time connecting with Republican voters and does not possess a core set of conservative values that unites him to the base of the party. What he does have is an unquenchable ambition to be the President of the United States.

In the 2016 presidential race, Romney chose not to run but tried every effort to derail the Trump phenomenon. He launched scathing attacks against Trump and even supported a gadfly Republican running against him. His real hope was to create a scenario that led to the election of Hillary Clinton as President.

When it did not work, Romney pitched himself to then-president-elect Trump as the perfect candidate for Secretary of State. He wisely decided not to pick Romney. It would have been a disaster for President Trump to have chosen a political enemy for the most important position in his administration.

After losing the Secretary of State sweepstakes, Romney launched a 2018 bid for the U.S. Senate seat representing Utah that opened with the retirement of Orrin Hatch. With his name recognition and fundraising abilities, Romney was the easy winner. Unfortunately, Utah traded a very pro-Trump conservative for a very anti-Trump establishment Republican. Not a good exchange for the people of Utah.

He really does not care about Utah or the United States Senate, but it is a national platform. It is why he ran for the Senate seat. It allows Romney to continue to publicly attack Trump. Despite his endorsements from Trump in 2012 and 2018, Romney has spent the last several years viciously attacking him.

Since his election, Romney has used every opportunity to bash President Trump. His latest broadside occurred in the aftermath of the President’s call for Ukraine and China to investigate the questionable deals involving former Vice President Joe Biden and his son Hunter Biden.

Romney tweeted “When the only American citizen President Trump singles out for China’s investigation is his political opponent in the midst of the Democratic nomination process, it strains credulity to suggest that it is anything other than politically motivated. By all appearances, the President’s brazen and unprecedented appeal to China and to Ukraine to investigate Joe Biden is wrong and appalling.”

What is “wrong and appalling” is that Romney mimics liberal Democrats in his regular denunciations of President Trump. When the transcript of the President’s call to his Ukrainian counterpart was released, Romney labeled it “troubling in the extreme...deeply troubling.”

Romney knows that when he attacks Trump, he will receive glowing praise from the liberal media. Every time, Trump-hating reporters flock to Romney for comment, which is exactly what he craves the most.

Fortunately, the Republican Party, and more importantly, the United States of America, has a President who responds when he is unfairly attacked. In contrast to former President George W. Bush who did not defend himself and pathetically allowed the Democrats and the media to tarnish his administration, President Donald Trump is quick to counter-punch when he is the victim of political mudslinging.

President Trump tweeted, “Somebody please wake up Mitt Romney and tell him that my conversation with the Ukrainian President was a congenial and very appropriate one, and my statement on China pertained to corruption, not politics. If Mitt worked this hard on Obama, he could have won. Sadly, he choked! Mitt Romney never knew how to win. He is a pompous “ass” who has been fighting me from the beginning, except when he begged me for my endorsement for his Senate run (I gave it to him), and when he begged me to be Secretary of State (I didn’t give it to him). He is so bad for Rs!”

As usual, the President is right on target and his viewpoint is shared by radio legend Rush Limbaugh. He recently told his radio audience that Mitt Romney is “one of these RINOs, a mainstream Republican who’s almost afraid to be a Republican and thinks he’s gotta apologize for Republicans and who they are and conservatives and who they are.”

Well said, Rush. Romney’s anti-Trump crusade may be part of a plot to run again for the GOP nomination and challenge President Trump or he may be angling for launching a presidential campaign in 2024. Whatever the real motivation for the Romney attacks, it revolves around his selfish political ambitions. What it does not reflect is any desire to help the people he was elected to represent - the citizens of Utah.