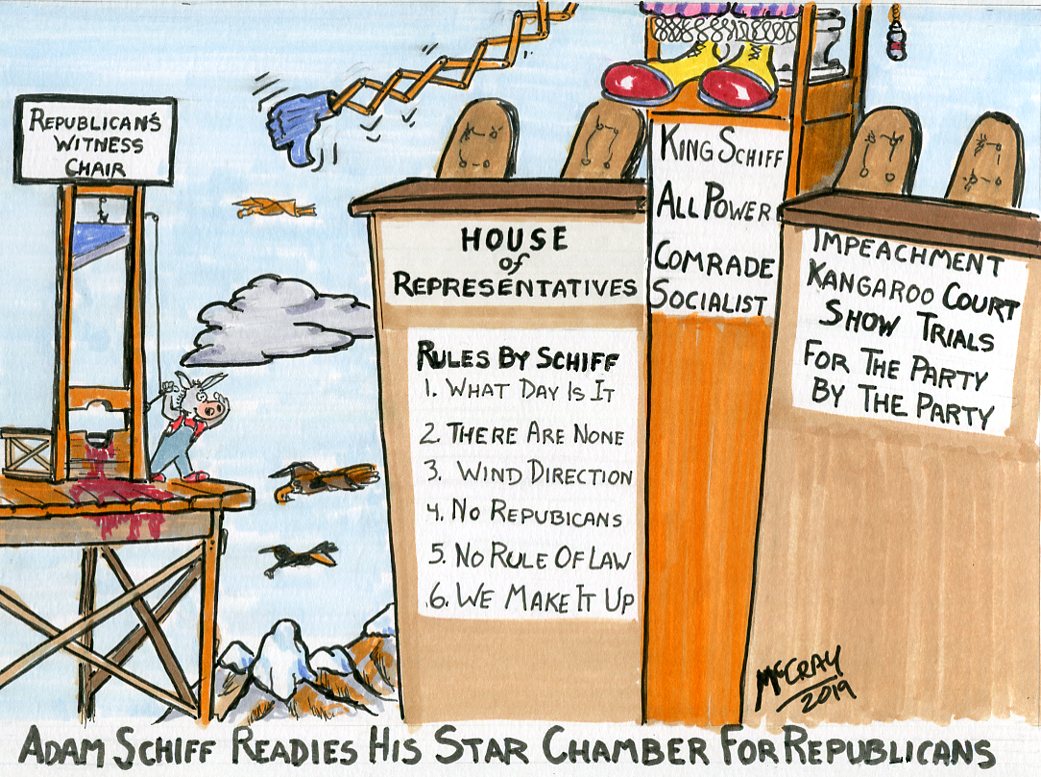 His omnipotence, holiness, and purveyor of barefaced lies, California’s radical leftist Adam Schiff readies his secret "star chamber" (old Michael Douglas movie) for Republican witnesses. A committee chaired by Rep. Schiff, which is operating by no rules, with procedures made up as they go along, is firing subpoenas out faster than a machinegun. This committee is supposedly an inquiry into the possible impeachment of the President, but it is completely one-sided and there is no representation for the President allowed and Republican House Members can’t participate.

Here’s the problem - to conduct a legitimate inquiry, a vote by the entire House of Representatives must take place for proper authorization. But in the bizarre world of Speaker Nancy Pelosi, she says they don’t need a vote because she said so. Previous impeachments have required a vote by the entire House of Representative, but now with the Socialists of the so-called Democrat Party making up the rules as they go along, let me welcome you to the Banana Republic of the United States.

President Trump is refusing to cooperate with the illegitimate Schiff committee unless the entire House holds a vote for authorizing an inquiry to impeach. This will force Members of the House to go on record and affords the Trump Administration as well as Republican members' participation in the inquiry committee. Schiff will be forced to follow set rules and guidelines; the momentum for a floor vote has been building over the past week. Then Adam Schiff announced that they won’t be needing the testimony of the whistleblower since they have the transcript of the phone call of President Trump and the President of Ukraine. The reality is their so-called whistleblower has been exposed as a highly partisan Democrat who reportedly worked in the Obama administration and was with VP Biden on trips to Ukraine.

To add another twist, Pelosi and Schiff announced on 15 Oct 2019, after a House Democratic caucus meeting, there will not be a vote for a formal impeachment inquiry. Pelosi said, “There is no requirement that we have a vote, so at this time we will not have a vote.” This is clearly an attempt to take the pressure off of Democrat Party members in swing districts. Rep. Schiff whined about all of the stonewalling by the administration slowing their investigation.

So far, this is proving to be the ultimate fishing expedition looking for anything Trump, and if they can’t find anything, they can make up a lie. The Schiff inquiry is being handled as if it were a grand jury which is a criminal function and has nothing to do with an impeachment investigation which is political. It’s a kangaroo court with no transparency, Republicans are not allowed to participate, there is no one present to represent the President, all of which violate House Rules and mirrors the show trials of the Old Soviet Union. Everything is geared to smear the President at every opportunity by trying him in the court of public opinion and have the complicit news media pound Trump at every turn.

The anti-Trump media outlet CNN has been caught with their hands in the cookie jar, their political bias has been publicly exposed by Project Veritas with a recording of CNN head Jeff Zucker telling top executives to focus on everything impeaching Trump even at the expense of other stories. The left is going for all the marbles - they know if they don’t succeed now and Donald Trump gets re-elected they have lost their best opportunity to seize total control of the U.S. Government. The left is losing ground; they know the longer Trump is successful the harder it will be to sell Socialism to the public, the more Socialism is debated the more people are educated to the horrors and enslavement of Socialism. This election is all about the United States remaining a free country or falling to the slavery of a totalitarian socialist state.