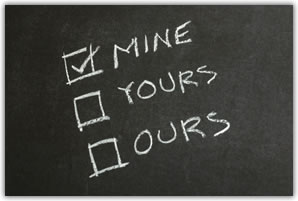 There must be hundreds, even thousands, of ways to hurt people. How could you take advantage of others to benefit yourself? What could put you ahead even if it costs and hurts others immeasurably?

It is greed and selfishness, looking out for yourself over others. Movies like "Catch Me if You Can," or "Wolf of Wall Street" depict some of this attitude. (Hmm...Leonardo DiCaprio in both of them...) Greed and selfishness are not part of God's love but are antithetical to the Divine Law. They are among the biggest problems we face in our country and the world.

Jesus said, "In everything, therefore, treat people the same way you want them to treat you, for this is the Law and the Prophets." (Matthew 7:12) Imagine how much simpler our country would be if people would follow this one admonition from the Son of God - in life, in business, in our courts, in government. The whole "sermon on the mount" (Matthew chapters 5-7 in the New Testament) would be a strong basis for a beautiful life in relation to others.

A recent statement I saw and appreciated was this:


Imagine someone who refuses to bake a cake, because when they tried it without using a pan it messed up their oven.

It's the same stupidity that goes into rejecting Capitalism because it fails when it's practiced without a strong Judeo-Christian foundation.

(H/T to Danny Carlton, purveyor of much "conservative truth" through "Liberal Logic 101" on Facebook (1), and other brilliant internet contributions.)

That "strong Judeo-Christian foundation" that Danny talks about was the basis for our country, though many would now debate and contest this fact. Were the early Americans perfect in their faith? Absolutely not. Did they have some questionable aspects of their faith and practices? Absolutely. But the general direction they were going, and the overall substance of their lives was foundational in creating arguably the greatest nation on earth. That foundation was Biblical faith and truth.

The formation of the United States has been called "the American Experiment." (2.) The early American colonists wanted a serious measure of freedom in their lives. They did not want England "lording" over them. They did not want to be taxed by the mother country just because there were riches to be exploited in the "new world." They wanted to be free to make their own decisions and run their own affairs. They wanted to worship how they each believed, not in a form governed by the national government. Life here was much different than in England, with different challenges and opportunities and trials. They wanted the government to be "fair" for all people, but not deeply over-involved in their lives. The government was seen to be almost a "necessary evil," only as barely involved as possible. This was their freedom they were talking about.

There will always be greed and selfishness in people's hearts in some measure until God's love is perfectly developed in us all. But as we each submit ourselves to God's truth that is found in Scriptural, Biblical teachings, through God's Holy Spirit at work in our lives, we will continue to grow in grace and love as a people. Without the working of the living God in our lives, though, I believe it is impossible to truly become all that God intended for us to be. He provides not only the guidelines for His truth, but through His Spirit, He provides the strength and motivation and means to attain His truth in our lives.

Do you ever wonder how you would manage things if "they" put you in charge? What would you do to really help there be a better life for all around you? Here are some questions you might ponder.

What if all the millionaires in the United States were to pool their resources and tackle one or more of the nation's real problems? What about hunger and nutritional education? Or homelessness? Or the health care shortcomings? Caring for the increasing number of elderly? Or countless other needs, like infrastructure, or invention, or education.

What might be the accumulated wealth of all those who are worth more than $10 million? The total of all that wealth could easily be in the hundreds of billions of dollars, if not in the trillions. What if each of them kept only $1 million of their wealth to live on, and willingly, charitably donated the rest of their fortunes to meet the needs of our cities, communities, counties, states, and the country? Here I am not talking about the government forcing them to turn over their wealth - by taxation. Just plain charity born out of love in the human heart. Just think about what could be done. Yes, they help support individuals and communities through the spending of their money by way of the economy. But it is largely through their own consumption of their wealth, helping others indirectly.

I am not against wealth, and I am not seeking to judge those who are wealthy for whatever reasons (except illegal or immoral). What I am suggesting is for those with substantially (or obscenely) more than they need to live quite comfortably, to consider sharing their wealth to help the cause(s) that affect our communities, our country, our world. Many of the wealthy are indeed quite charitable. In fact, we often hear about it, because some want their charity to be known by others. Jesus had something to say about that, as well. "Beware of practicing your righteousness before men to be noticed by them; otherwise you have no reward with your Father who is in heaven." (3)

I guess part of what I am saying is that the capitalism that our country symbolizes and that has helped make us the envy of the world, could quite possibly fail if we don't come back around to some of the very foundational principles that have allowed such wealth to accumulate. If we each look out only for ourselves, we are to be pitied.

Collectively, our country has been quite generous in the world as needs have arisen. But there is always a balancing act on what we can do, compared to what we are doing - whether as a group or individually.

"Peace be to the brethren, and love with faith, from God the Father and the Lord Jesus Christ.
Grace be with all those who love our Lord Jesus Christ with incorruptible love."
Ephesians 6.23-24