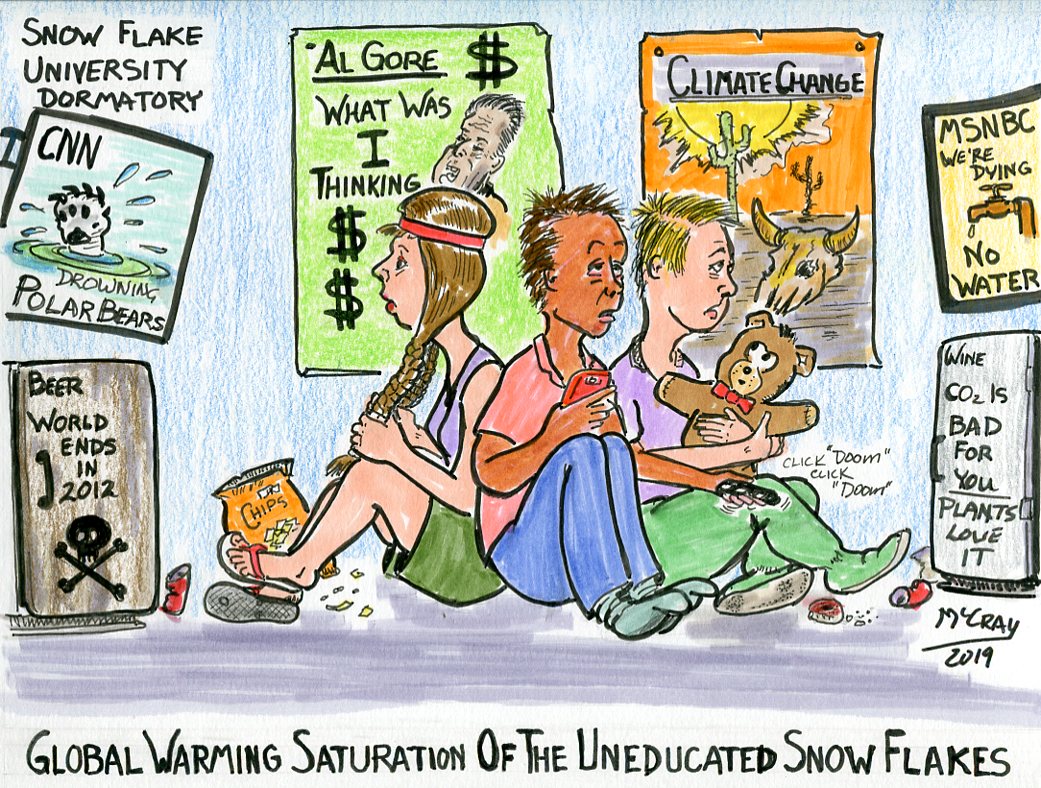 The Snow Flake generation gives a whole new meaning to the word clueless - this generation is totally oblivious to reality. For many, their world is wrapped up in the cell phone in their hands or in a fantasy world on a laptop. Ask them about current events and they don’t know anything except they hate Trump. When you ask why they hate Trump, with some you might get the usual anti-Trump buzz words; most of the time you get that blank deer-in-the-headlights stare.

Older adults ask what’s the matter with these young adults, they literally don’t know anything. It’s not that they didn’t learn anything, the problem is what they were taught. They are entitled and should get participation trophies. Why should they work when the government will give them everything? The U.S. causes Climate Change and all of the Global Warming, in that it is our fault for generating all of the CO2 gases. History - forget it, they believe the Founding Fathers were a bunch of old white racist slave owners, who created this horrible country the United States, which is a threat to the world and has started all of the wars. They want to abolish borders, gas-powered cars, guns, law enforcement, and the military. The farms should be eliminated because cows pass gas, and many even question why we have farms, for they believe that all of their food comes from a grocery store. They are incapable of balancing a checkbook, understanding basic financial transactions, and don’t know how to count money and make change. They are representing a generation uninterested, introverted, arrogant, self -righteous, and totally disconnected from the reality of life, unable to handle life’s challenges as well as being psychically out of shape.

Our so-called public education system is more interested in teaching students about Socialism, social justice, having a safe place, political correctness, shunning and stomping those who do not agree with them. Indoctrinated with the socialist dogma of everything should be free, punish the rich, make the rich and government pay for everything, they are taught that older adults don’t know anything and this generation with the Snow Flake tag are geniuses. This isn’t just taught at the university, now it goes all the way down to pre-school.

We are seeing the results of the infiltration by the Soviet Union going back to the 1920s when Soviet Leader Joseph Stalin initiated the export of the Soviet Union’s Socialism around the world. This plague has poisoned the world with promises to the downtrodden that they will be elevated to equal status with everyone else from rich to poor. This plague shows how deeply rooted it was in the university system of the U.S. during the 1960-70s protests of the Viet Nam War, when the preaching of socialism on the college campus drove a lot of the anti-war protest.

The students of those left-wing universities and colleges have become the teachers who are dumping more of the same garbage of socialism on today's students. To stop this plague from continuing to spread, a curriculum of civics classes needs to be manditory along with indepth world and U.S. history with penalties for school systems that fail to teach. Public service announcements in the form of videos that show the difference of democratic systems and socialism need to be circulated in all of the venues of today's world of communications. It will take an all-out effort to counter the false promises of Socialism, it needs to be an ongoing effort much like the ‘Radio Free Europe’ that operated during the Cold War. Socialism has been tried in over 50 countries and has been a complete failure that has resulted in the death of millions, repeating the same thing over and over; expecting a different result is insanity.

Challenging the Snow Flake generation is a must; they need to grow up; many literally don’t know how to cope with the real adult world. This is the pliable generation that has bought into Socialism hook, line, and sinker, believing that capitalism and our representative style of government is bad. This is the generation that will either get it together and wise up, or they are going to hang on to the socialist propaganda and pull the country down.