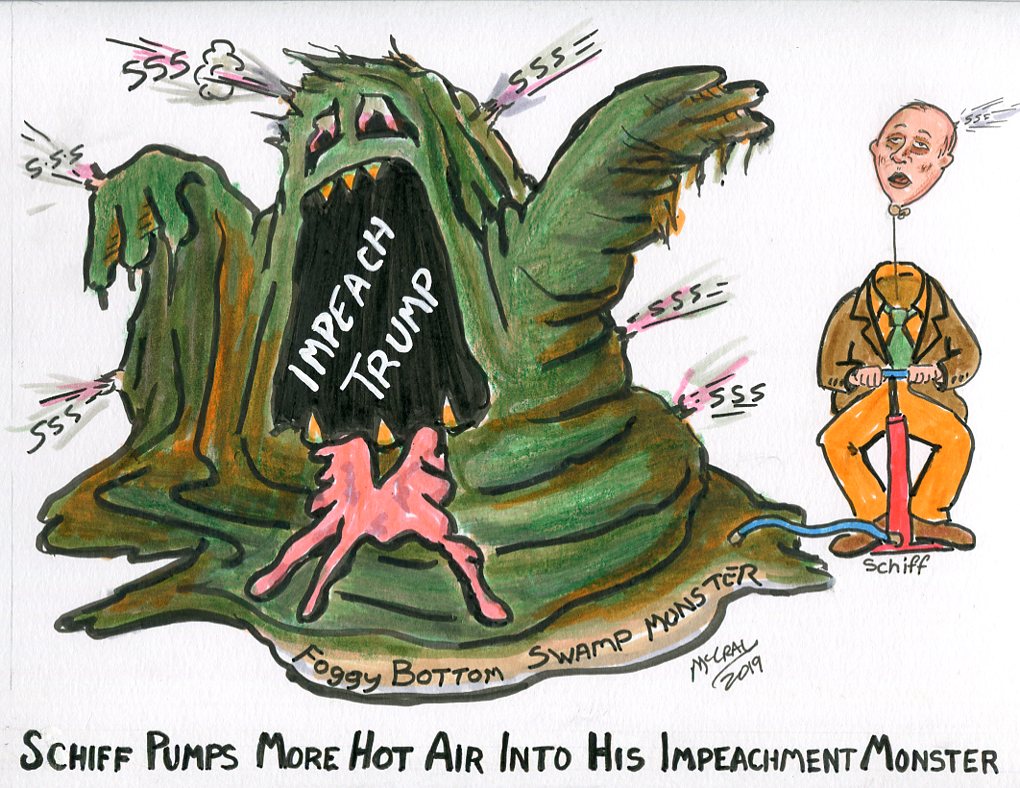 Just as a little more air is let out of this giant gas bag, Schiff adds more with a barrage of subpoenas launched into the Washington Swamp, knowing that many will not comply due to Presidential executive privilege. More hot air is pumped in with the claim the President is obstructing Congress, for failing to provide the subpoenaed individuals. During the middle of this mess, House Speaker Nancy Pelosi claims that this 'kangaroo court' is legitimate and she is not required to follow the standardized procedure of voting by the entire House of Representatives, all because she says so.

Schiff’s gas bag lost some of its air when the Whitehouse refused to cooperate with Schiff’s illegitimate kangaroo court, and then Senator Lindsay Graham poked a couple of holes with a letter of resolution co-signed by 50 other Senators to Speaker Pelosi, demanding that the House Speaker initiates a vote by the entire House for a formal impeachment inquiry, giving the President the right of due process and the Republicans right to call and question witnesses. Nancy Pelosi caved on 29 Oct. 2019 with a call for a House vote, and all of the procedures of due process in Senator Graham's letter must be included ending the secret trial activities of Adam Schiff’s Kangaroo Court.

Failure to adhere to the Graham Resolution, letting Schiff’s secret trial continue, will cause a Constitutional issue as the President will be denied proper due process allowed every U.S. Citizen under our law. This may result in a rejection by the Senate of any action taken by the House and a refusal to be involved in any impeachment proceeding against President Trump. Another option could place a complaint by the Senate against the House before the Supreme Court for preventing the President from having the right to legal due process. The so-called evidence developed by Schiff’s Secret hearings should be inadmissible before a proper impeachment hearing as they were derived by a contrived one-sided means.

Schiff has started to pump in more hot air, a Lt. Col Alexander Vindman of the National Security Agency has popped up and testified behind Schiff’s super-secret closed door of the deep basement room of the Congress. The Lt. Colonel was listening in on the Presidential phone call and in his opinion, did not think it was proper for the President to ask another country about another U.S. Citizen. How convenient. Don’t expect to hear some earth-shattering testimony different than the transcript of the Ukraine phone call. It is doubtful that Lt. Col. Vindman will say anything different, unless he wants to commit perjury by offering testimony that would differ from the transcript. How many more opinionated never-Trumpers does Adam Schiff have lined up for his show trial parade?