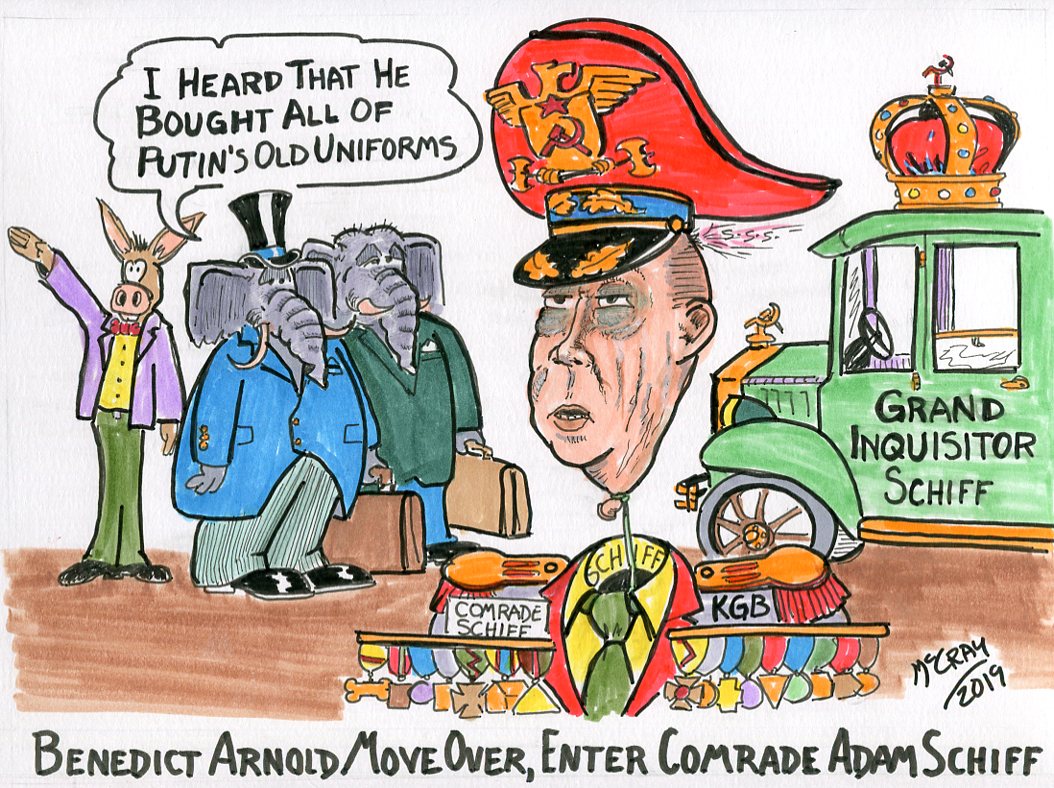 House of Representative member Adam Schiff (D-CA) has been elevated to the level of judge, jury, and executioner over the impeachment inquiry of President Donald Trump. Speaker Nancy Pelosi has left Schiff and his Intelligence Committee in control of the inquiry, instead of moving the proceeding to the Judiciary Committee as required.

Known for achieving stratospheric levels of leaking sensitive information and flat out lying about anything Trump, Schiff constantly wraps himself and his actions in the American Flag, speaking in platitudes about how President Trump is damaging and endangering our democratic process. The transcripts of Schiff’s ultra-secret impeachment inquiry have finally been released, and the question is, are the transcripts accurate or are they doctored? Schiff continues to subpoena members of the Trump administration who can’t testify, knowing they fall under Presidential Executive privilege. All so he can beat his drum and cry that Trump is obstructing justice.

In the three Presidential impeachments conducted in U.S. history, President Andrew Johnson 1868, President Richard Nixon 1974, and President Bill Clinton 1998, the procedure has included the right of the accused to face their accusers and defend themselves, the same right as any other American has before a U.S. court of law. Adam Schiff has stacked the deck with procedural rules that prevent the President from having equal protection under the law. This President is not allowed to have counsel to represent him. The House Republicans are restricted in the questioning of witnesses and cannot call witnesses without the approval of Mr. Schiff. This is Schiff’s way of putting both feet on one side of the scales of justice.

Adam Schiff was born 50 years too late and in the wrong country, as he would have thrived in the old Soviet Union. The people of the United States continue to be subjected to a one-sided political show trial of the type seen in socialist countries. In the show trials of China and North Korea, the accused is marched before a judge, accused of crimes, found guilty, and marched to a ditch where they get a bullet behind the ear.

Nancy Pelosi, Adam Schiff and the rest of the subversive socialists in the House of Representatives would do anything to destroy President Trump; they know he will win re-election and this is their best shot. Schiff dragged the country through the pending Mueller investigation for two years with false claims of damning evidence against Trump. Again, Adam Schiff is making the same outlandish claims of corruption and violations against President Trump, but only a complete fool would believe this repeat performance by Schiff.

The motivation for the about-face is unknown, but on 6 November 2019, it was announced the impeachment inquiry will be moving from Schiff’s ultra super secret basement hearings to a public hearing venue on 13 November 2019. It will be interesting to see if this inquiry follows the proper guidelines or continues to make things up as they go along.

The left wants the President to look like damaged goods, so much so that a 2020 Socialist Democrat can win the Whitehouse. This is all part of a massive, well-funded propaganda effort to unseat Donald Trump and push Socialism on the American People. The greedy left wants all of the wealth of the U.S. and with that control of the people and their wealth. If the left is successful, we will see all of the ills that have fallen on all of the previous socialist state disasters appear in our country.