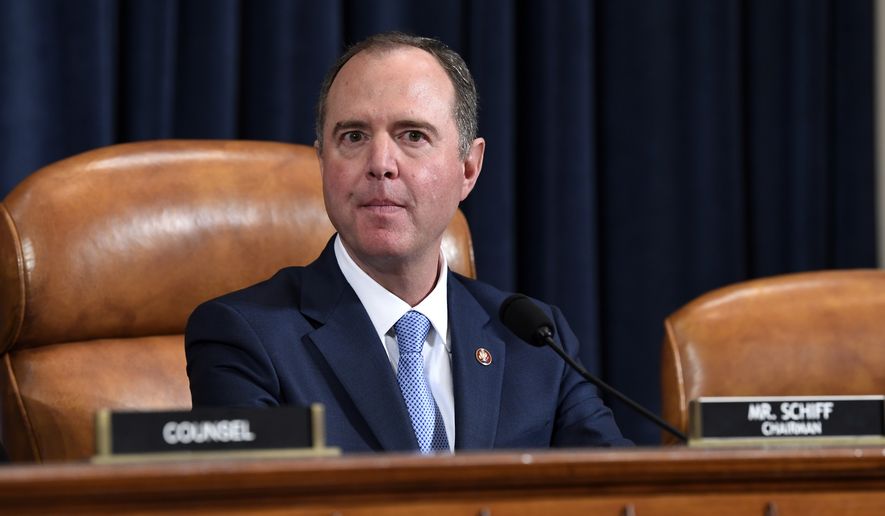 If you wanted to create a cardboard cutout of a two-dimensional, creepy villain you could not do better than the Dem’s pick to head up their impeachment show trial.

Not since the heavy-handed performance of Stalin’s lackeys during his purges of the 1930’s have we seen such a blatant example of rabid partisan pre-judgment and ham-fisted handling of something that, in the country that championed fair play and the rule of law, is the direct antithesis of a process that should be both bi-partisan and fair

It is anything but.

If this was a movie you would by this time be muttering, “Oh come on. A real public trial by lawmakers would never be allowed to be run this way.”

In the movie version of the show trail, every time the judge silenced the defense attorney there would be ominous music and a cut to a close-up of the partisan judge sneering. And yup…pretty much that's exactly what we have.

So here we have Hollywood’s version of a classic show trial where those presenting the ludicrous and convoluted charges have decided on their guilty verdict first and then have spent years hunting for a crime. Just like Stalin's USSR.

That’s the bad news. But the bad news is ironically the good news too. Because just like a somewhat predictable Hollywood script, it also makes it easy to hiss the villains.

The opposition party judge and his ‘witch-hunting’ cronies make a perfect cast of hysterical, snarling town mob -  the likes of which usually appear in movies about the Salem witch trials or as the ‘hanging judge’ in the old west when the lynch mob is waiting with a rope outside the courthouse.

When we see those old movies and the events they depict, we often think, “Wow, how could the good people let those charlatans get away with their phony charges?"

To real people with a sense of American justice - just like in the movies, where the victim is being ‘railroaded’ by the mindless mob and corrupt cabal, it was always evident by the end of the movie who are the real villains.

And that’s why we should not hate the leader of this current lynch mob. We should thank him.

Because if we were looking for character actors to cast in the roles of bigoted, small-minded villagers, salivating at the thought of falsely accusing their neighbor, or a mindless lynch mob braying for blood, we could not do better than the current crop of Democrats who have been a mob in search of a crime for the past 3 years.

In fact, just like all of the sham trials in the movies, there is a very good chance that this will wind up backfiring on the biased zealots who fabricated the whole thing.

Obviously, a large part of this charade is merely pandering to their base of rabid Trump haters and their party members with press passes - laughingly referred to as the “Mainstream Media" - who are anything but mainstream, unless you define mainstream as the radical, socialist left.

They have been in a perpetual state of hysterical hyperventilation ever since the American people decided that they did not want Hillary and her cronies running their government.

Since that November night three years ago they have been trying to take by subterfuge and treachery what they could not achieve at the ballot box.

In one way they almost succeeded through the DNC operatives that they had spent years placing in key positions in the deep state. This impeachment trial was to be the ultimate manifestation of those ‘sleeper agents’. And had they chosen someone less rabidly partisan and ham-handed than Schiff, it could have very well succeeded.

Fortunately for us, the way this central casting villain is demonstrating just how blindly partisan and foregone the conclusion is, the only ones who will be convinced by this nonsense are the Democrats. And they spend most of their lives being convinced by nonsense anyway, so no new minds will be changed and no new hearts will be won.

Quite the contrary. Democrats are now giving Republicans a perfect opportunity to take back the house by ensuring that the only record they will have to run on for their legislative efforts over the past 3 years, will be trying to impeach the president. Over and over and over…

And outside of collecting their own unearned paychecks, their efforts will not put one dime in any voters' pocket.

So don’t hate Adam and the Democrat hit squad - they and their scripted show trial just might turn out to be the best friends conservatives have!