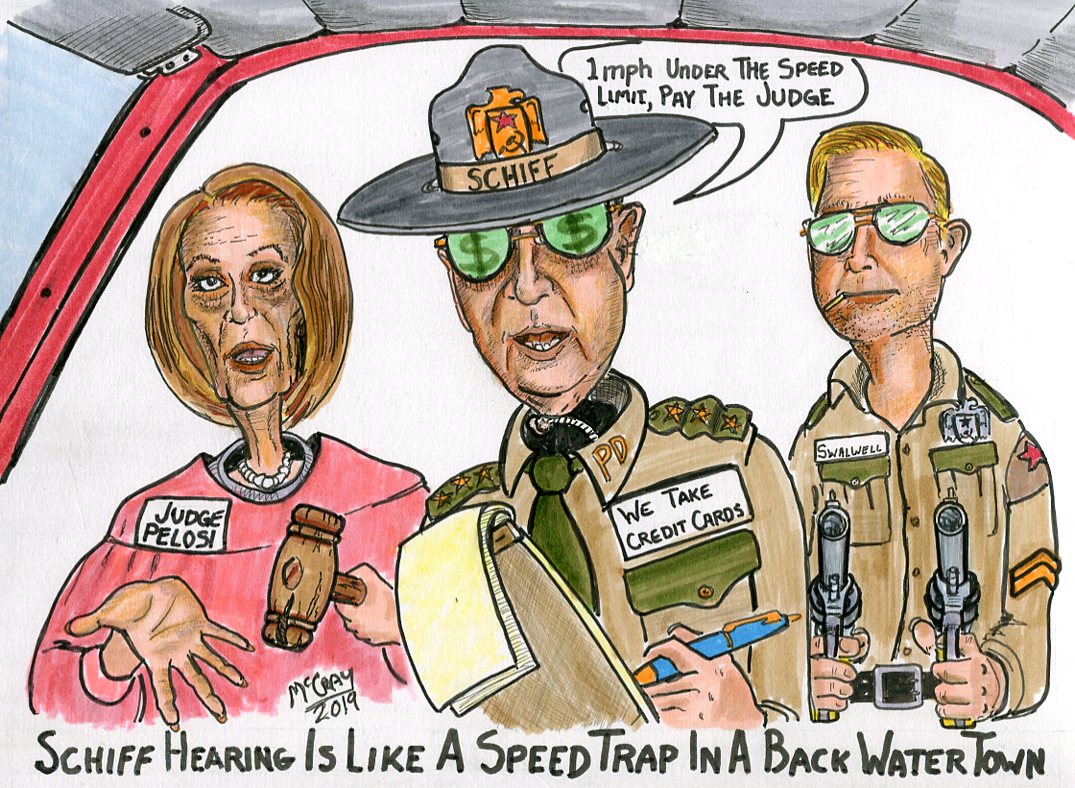 Have you ever been stopped in a small town in the middle of nowhere, where the police chief, patrolman, and the judge are all related. Then you get that sinking feeling that you are in a losing situation that is going to be expensive. No matter how right you are, with irrefutable evidence of your innocence, it will cost you because you are guilty for being there. The town’s entire economic income is generated from traffic tickets, and you have made the mistake of driving through. Now you’re going to pay.

Three years ago, Donald Trump not only drove through the small backwater town of Washington D.C., better known as the Swamp, he decided to stay and straighten out the mess. Of course, the small-minded, petty denizens of the swamp are very upset at anyone who might mess up their graft and corruption, so much so that they are striking back. Trump is not one of their good old boys, not one of corrupt inside the beltway or connected to the network of alumni of certain university fraternities. He is the outsider elected by those stupid uneducated, unwashed, deplorable people, who simply cannot be allowed to succeed.

Congressman Adam Schiff (D-CA) the bombastic Chairman of the Intelligence Committee is acting as the judge, jury, and executioner of the Impeachment Inquiry of President Trump. Schiff and his team have spent the last two weeks spewing innuendos, calling the President a criminal and corrupt, characterizing anyone who supports Trump as un-American. A parade of people characterized as having incriminating evidence of Trump’s illegalities has been lined up to testify against the President.

The problem for Schiff and the other Trump haters is that the incriminating evidence isn’t there. Schiff is still fishing around for a crime. Some of the witnesses had second or third-hand information regarding the President’s phone call with President Zelenskiy of Ukraine. The two witnesses against President Trump who actually listened in on the phone call were Jennifer Williams, a foreign policy adviser to Vice President Mike Pence; and Lt. Col. Alexander Vindman, Ukraine adviser at the National Security Council. Their "testimony" was about their feelings. They were uncomfortable with and thought the content of the phone call was improper.

In the case of one witness, Lt. Col. Vindman, it was revealed that he had been offered the position of Defense Minister by the Ukrainian Government. Other witnesses also revealed that Vindman’s judgment had been questioned regarding other events and that he may have strong feelings toward his native Ukraine. Other problems exist with Vindman’s testimony. His superior, Tim Morrison, was unaware of Vindman’s concerns and was not notified by Vindman as specified in a proper chain of command.

Ambassador to the European Union, Gordon Sondland spent most of Wednesday the 20th of November weaving all over the road. Sondland stated that he was not a note taker and didn’t have access to a specific state department document, so he was going recount his version of events by memory. After the initial claim by Sondland that there was a quid pro quo between President Trump and President Zelenskiy of Ukraine, Chairman Schiff called for a break in the proceedings to run out before the press cameras to crow about the impeachable offenses by President Trump.

Later, after being challenged by Republicans on the Intelligence Committee Sondland, modified his claim. He said it was his presumption, his guess, that there was a quid pro quo regarding Ukraine. Finally, at the end of the day, Sondland stated that he had asked President Trump, what do you want from Ukraine, the President had said “nothing, no quid pro quo.” He wanted President Zelenskiy to do what he ran on, transparency and no corruption. Sondland had never heard a quid pro quo from Trump, which blows a big hole in the assertion that Trump demanded info on the Bidens in return for the Military Aid Package.

Mr. Schiff and his witnesses have yet to identify which law was violated and what kind of high crime or misdemeanors applies to the President. All that Mr. Schiff has had to offer has been wild accusations, inflammatory statements with promises that he has pieces of evidence that will convict the President. So far, all that has been presented is a re-run of the Mueller Report. Mr. Schiff and others paraded in front of the cameras for 2 years claiming to have evidence of horrendous wrongdoing by the President. The only thing that Schiff should receive credit for is the speed at which he moved piles of manure around the capitol.