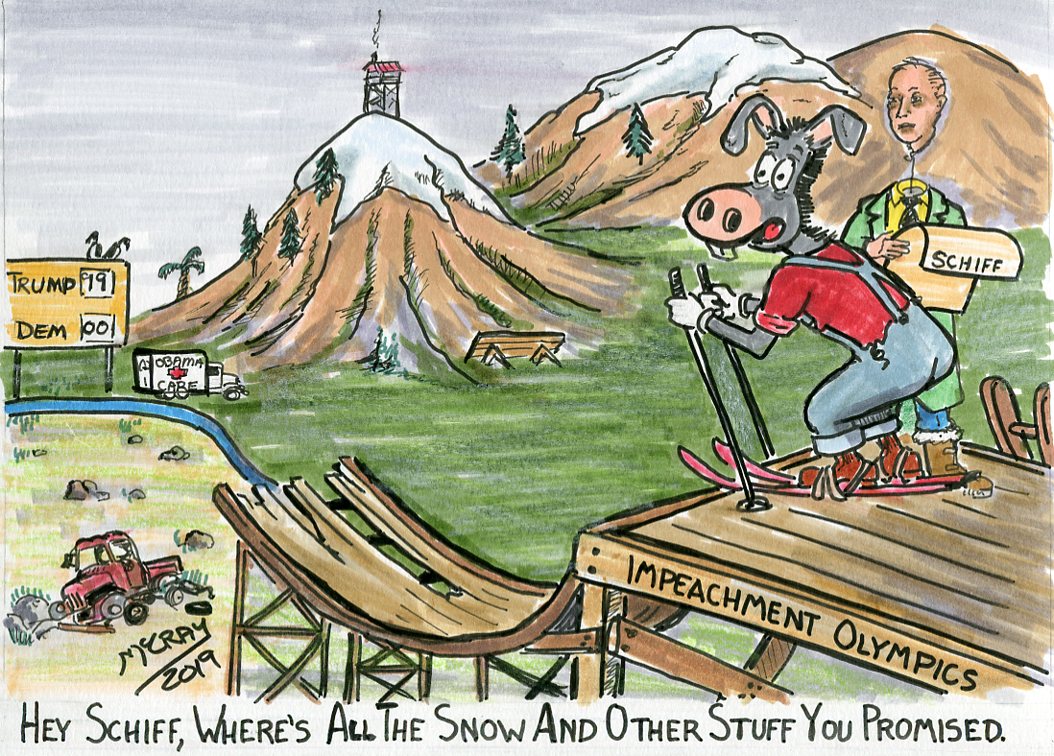 Rarely do the verbal gymnastics, spins, and lies of the U.S. Congress achieve the levels of Olympic competition. California’s Rep. Adam Schiff and House Speaker Nancy Pelosi have steered their band of political agitators and smear merchants generating false accusations and innuendos to near Olympic proportions.

After two years of Schiff dangling promises of damning evidence against President Donald Trump with the Mueller Report, which proved to be nothing more than empty accusations. Schiff failed to prove any involvement by Russia in the Donald Trump election campaign in the 2016 election. Not willing to give up Schiff and Pelosi have subjected the public to a re-packaged re-run of the Mueller Report investigation. All of which is based on a phone call by President Trump to President Zelenskiy of Ukraine. The left is now accusing President Trump of threatening to withhold military funds to Ukraine in return for information on former Vice-President Biden’s family dealings in Ukraine in a quid pro quo.

Schiff is trying to recreate the 1970s Watergate investigations, by parading one witness after another presenting hearsay statements as fact. Schiff and company are fully expecting all of the Democrats in congress to support their effort. Instead, they have a growing number of Democrats are getting cold feet and looking at their own chances for re-election.

Flipping faster than a hooked fish, Michigan Democrat Brenda Lawrence on Sunday 25 November (2019), made the statement, “Sitting here knowing how divided this country is, I don’t see the value of taking him (Trump) out of office. But I do see the value of putting down a marker saying his behavior is unacceptable.” “I want him censured.” Well, that was Sunday; on Tuesday Lawrence’s thinking was evidently corrected, and she now fully supports the impeachment hearings.

After two weeks of listening to Adam Schiff smear the President and watching all of his evidence fall flat without any proof of wrongdoing, it looks like it’s time for him to pass the buck. The Judiciary Committee headed by Trump-hater Jerry Nadler will begin hearings into the impeachment of Donald Trump after the Thanksgiving holiday break. The plans for the inquiry are so impressive that Senator Lindsay Graham (SC-R) observed that, “Jerry Nadler is inviting President Trump to participate in the Judiciary Committee hearings – after all of the facts were gathered in Schiff’s Intel Committee – where the president’s team was shut out. The Salem witches got a better deal!”

Schiff’s circus act has demonstrated the one-sided attack on Trump and the 2016 election. Now the Democratic political machine has one major problem - there is no proof of wrongdoing by President Trump. Public support for impeachment and the removal of President Trump from office is dropping, the NPR/Marist poll is showing a 7 point drop from last week’s 37 percent call for impeachment. Nadler’s effort to pick up and run with the ball is going to meet the same fate as the previous show trials, a big fat dud.

Nadler’s Judiciary Committee is going to be relegated to the position of a sideshow act. The real three-ring circus act will kick off with the Inspector General’s report that is expected on 11 December, when IG Michael Horowitz appears before the Senate Judiciary Committee. Testimony will be focused on the abuses of the FISA Court by the FBI and other intelligence groups involvement with the attacks on the Trump campaign during the 2016 election.

The Democrats know they can’t beat Trump in a head to head race. The Trump economy is charging ahead and unemployment is hit all new lows, especially among minorities. Their Soviet Union-style show trials have failed to unseat Trump and destroy his presidency. The Democrats can claim one thing out of this Coup attempt, and that is failure, that will hang around their necks for a long time.