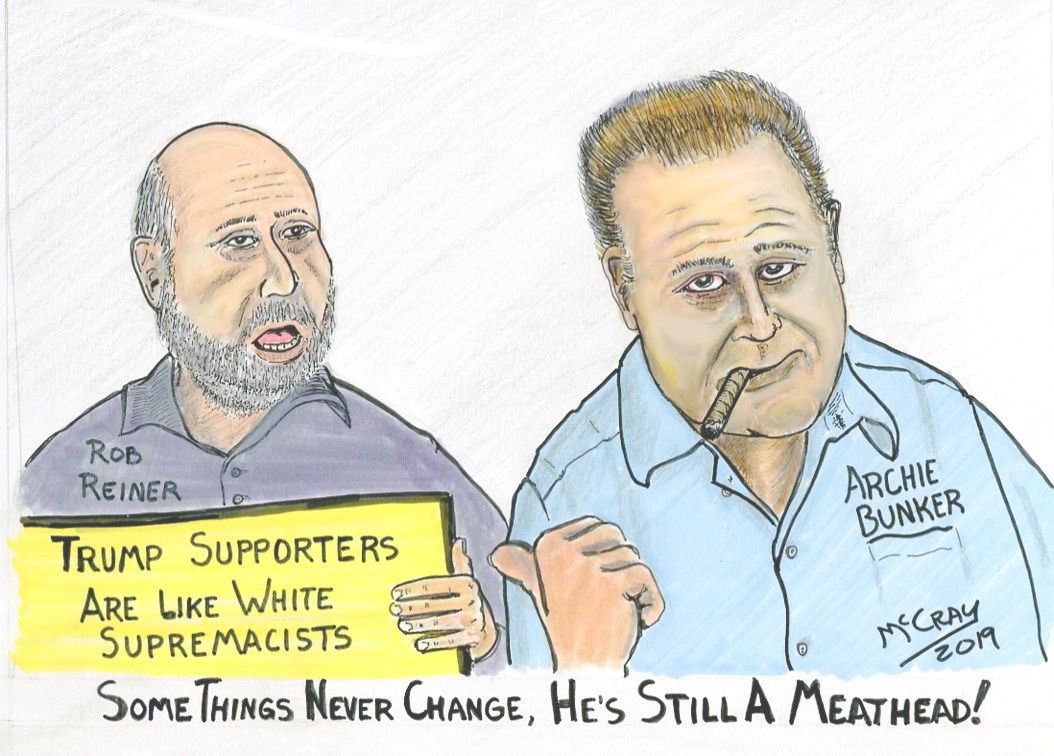 Hollywood does it again, another celebrity genius delivers another juvenile statement. Actor and director, Rob Reiner who is famous for his role as ‘Meathead’ in the ‘All in the Family’ series, has likened supporters of President Trump to white supremacists. Reiner is not the first member of the Hollywood set to make idiotic remarks and call the average American juvenile names and insults. In 2017 actress Jennifer Lawrence implied that we are suffering the wrath of Mother Nature with Hurricane Irma because of Donald Trump.

Actor Robert DeNiro takes the prize for the most unhinged, whenever anyone mentions Trump, it results in bizarre triads of “He’s so blatantly stupid, He’s a punk, He’s a dog, He’s a pig, He’s a con - a Bullsh*t artist.” The rest is an obscene string of F this and F that, gee whiz DeNiro, tell us how you really feel about Trump. For the past 3 years, the elites and Hollywood celebrities have lectured about their dislike of Donald Trump and his supporters, with many celebrities declaring that they are going to leave the country. Well, we are still waiting for these self-righteous, holier-than-thou actors to leave the country; "Don’t let the door hit you on the way out. You may want to go to Cuba, Nicaragua, Venezuela, Bolivia, North Korea, Russia or China, there you can live in your Socialist Utopia."

Whether it’s the celebrities of Hollywood or the make-believe journalists of the media news shows, disparaging Trump and his supporters, they spew the same chant. "Trump is a bigot, misogynistic, racist, rapist, sexist, xenophobic, fascist, insane, sociopathic, narcissist and a megalomaniac." Regardless of which channel you turn on, they spout the same words or phrases provided by the great and powerful Oz, who is hiding behind the curtain. It’s scary to think that one person or small group can issue the topic, phrase, or words for the day. That all of the talking heads of the press will jump on, and build their entire show around the same words or phrases, it shows that they move as one, in lockstep repeating the words of their great dear leaders.

Those in Hollywood who do not fall in line and recite the anti-Trump mantras, who instead voice their opposition against the socialism of the so-called Democrats, pay a heavy price. They are blacklisted, lose acting positions, and are generally froze out of work, conservative actor James Wood has quit acting because of the drop in job offers. Many others say nothing so that they can continue working, as they are subject to the political whims of the studio heads.

This is how all totalitarian governments work, the monarchies, fascist, communist, socialist, and dictatorships; it’s get in lockstep with the others carrying out the leaders' wishes or be punished. This is the style of government pushed by the Socialist, they will promise you everything. History has proven the promises are always false and all they can guarantee is grief and poverty.