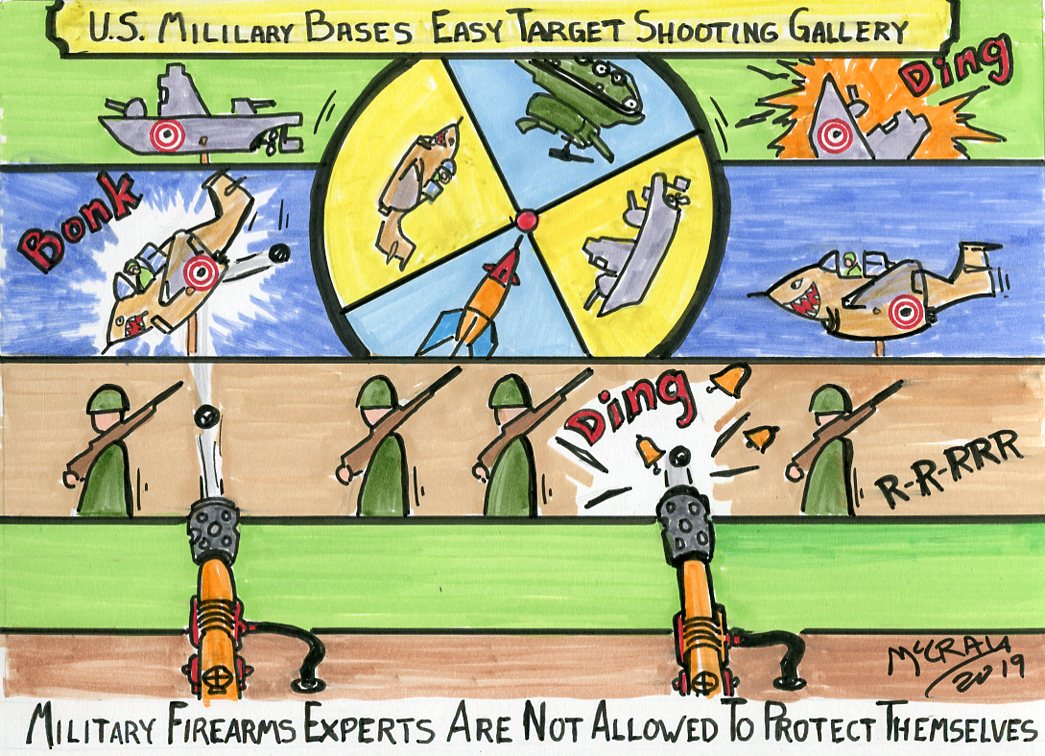 Terrorists always like to hit soft targets, and in the United States that includes military bases. You would think that an attack on a military base would be like wrestling a porcupine. Or, trying to force your way into a castle, you will be met with a swiftly reacting force of arms that will stop the threat at the gate. If the threat makes it past the gate without triggering an armed response, the threat then has access to the soft underbelly of the base. Most bases are a small town in their own right with standard police patrols, and with a few exceptions, people are unarmed.

The best-trained firearms experts in the world are disarmed and unable to protect themselves on a military base, all because upper-level officers and politicians who went to the academies and certain colleges, look down their collective noses at the great unwashed and ignorant lower ranks. They have the caste system view of life where they are geniuses and you’re stupid and incapable of handling the responsibly of a firearm - yeah, right.

During the 1970s terrorism raised its ugly face in Europe with the Palestinian Liberation Organization and its spinoffs of Black September, The Red Army Faction, and The Baader-Meinhoff Gang. Attacks occurred at the Munich Olympics, Rome Airport, and attacks at Frankfort and Heidelberg against the U.S. Army, assassinations of noted public figures, and airline high jacking.

During that time, the author was an E-4 corporal armed with a Colt 1911 pistol, who was assigned to handle communications, carry codes, and protect the U.S. Commanding General of Europe (C-in-C, USAEUR). The fact that a 20-year-old was in this position flies in the face of the idea that lower ranks should not carry arms on a military base.

There is no reason why NCOs, that is, your sergeants and petty officers along with junior officers, shouldn’t carry sidearms. Here you have trained personnel, many with combat experience, capable and willing to turn on their heel in moment’s notice and counterattack any threat. How many more would have survived the terror attack at the Ft. Hood massacre, the shooting at the Washington D.C. Navy Yard, and the recent Pensacola Naval Air Station shooting. Recruiters and reserve units have been attacked in the past and should be able to protect themselves. It is understandable that not all would or need to be armed all the time, especially those in training or in a work activity that would preclude carrying a sidearm. If firearms need to be secured due to an activity, firearms cabinets that are already in use by the military can be used in a larger quantity.

The hazards of the 1970s were not much different than today's - some of the terror groups are descended from the aforementioned groups. We send 18-year-olds to war carrying all manner of weapons with all kinds of restrictions, called the rules of engagement. Our troops have shown repeatedly their use of restraint under extreme and adverse conditions, yet, somehow they are considered incapable of using that same restraint on U.S. Military bases. It’s all about trust - how many more service personnel have to die because of a bunch of snooty, high-brow geniuses who think they are smarter than everyone else?