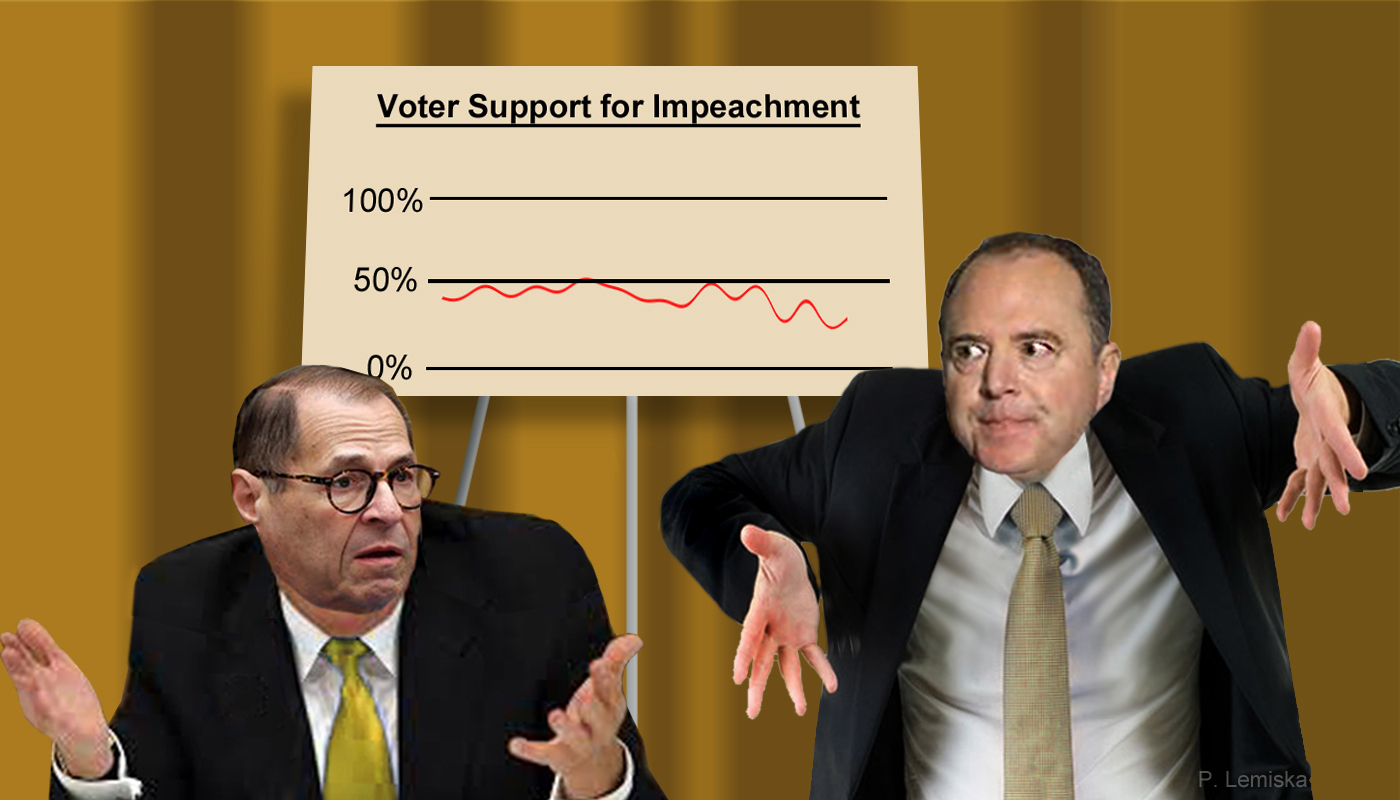 Democrats have tried everything to gain public support for impeachment. After alternately hinting at it, suggesting it, and demanding it for three years, they brought in a special counsel to investigate the president. Then there were the hearings, closed and open. They tried appealing to our sense of justice and to our patriotism. After all of that, they aroused not much more than a collective yawn from the public.

Why is that? Why are so many ambivalent on this issue? Why can’t they see those high crimes and misdemeanors? Or to paraphrase Rex Harrison, as Professor Henry Higgins, why can’t they think more like a Democrat?

Well, most Americans are objective. Along with a handful of Democrats, they think independently. They may not have ivy league law degrees, but they do have common sense. They’re smart enough to know when they’re being bamboozled.

They heard Democrat leaders in the most somber tones they can muster, bemoaning this course of action they were “forced” to take. “This has nothing to do with politics,” they said. But Americans have all heard their hateful rhetoric and their orgiastic screams for Trump’s impeachment. They’ve looked at the facts, and they’ve seen the strict party-line vote. They know it has everything to do with politics.

And when Nancy Pelosi and all the others say they must show that “No one is above the law,” perceptive listeners know they have exceptions. They know about the irrefutable quid pro quo between the Obama Administration and Ukraine. They remember Hillary Clinton’s exoneration, based on that incredible claim that no reasonable prosecutor would consider charging her. Americans understand that every time Democrats wax self-righteous with those words, they’re really saying, “No one is above the law, Democrats excluded.”

And when they start to extol the wisdom of our Founding Fathers, discerning Americans know something’s off-kilter. Only a few weeks ago, Democrats, liberals, and progressives were demeaning the Founders as racist, misogynist, white men. They were tearing down monuments erected in their honor. Their newfound reverence for our Constitution is equally hard to swallow. Before they needed it for impeachment, they saw it, not as the cornerstone of our republic, but as a living document, needing constant tweaking. Their comrades have worked tirelessly to diminish our free-speech rights, our gun rights, and the citizenship provisions outlined in the Constitution. And for years, they’ve been trying to undo our Electoral College, defined in that document. Most Americans are smart enough to see through their new facade.

And they’re not fooled by theatrics, either.

There’s a humorous old saying, often associated with the legal profession, “If you can’t dazzle ‘em with brilliance, baffle ‘em with B.S.” Having tried the latter, Democrat Congressmen recently invited a panel of law professors to dazzle us with brilliance. Only the three who supported impeachment were encouraged to spout their palpable hatred and bias unabated. Their testimony definitively explained how we got to where we are today. It showed that, whether in law or politics, there’s no room for reason or objectivity in a mind filled with hate.

The vast majority of Americans are also fair-minded, and they see a process made decidedly unfair by closed-door hearings and biased witnesses, hand-picked by Democrats.

They hear Democrats accuse President Trump of abusing his power, calling him a would-be king. Those same Democrats were silent when Barack “my way or the highway” Obama vowed to bypass Congress with his pen and his phone. Where were they when he abused his executive powers to create new immigration law and to block congressional subpoenas?

They say Trump conducted foreign policy to benefit himself. But when Obama lied about the events leading to the death of four diplomats in Benghazi, could that lie have been anything other than self-serving? And when he made that covert, unilateral deal with Iran, many argue that his real purpose was to create his foreign policy legacy. Considering all the concessions he made, it’s clear he wasn’t thinking of America’s interest.

Finally, those opposing this impeachment are pragmatic. They think in practical terms, and they’re inclined to keep what works. None of the dire predictions about a Trump presidency ever materialized. After three years, the stock market hasn’t collapsed. Our economy hasn’t crumbled, and World War III hasn’t started. On the contrary, our economy is booming, world affairs are relatively stable, our military is stronger, and the president is working to secure our borders.

Practical thinkers also know that this effort is doomed to fail in the senate. They recognize it as a petty, spiteful exercise in futility, a waste of time and money that could better be spent enacting meaningful legislation.

It’s obvious why this impeachment effort isn’t gaining traction. Most Americans see more clearly than those Democrats blinded by hate. The vast majority of Americans are objective, fair-minded, and pragmatic – and they’re smart enough to know when they’re being played. They’ve seen how Democrats took a fairly innocuous telephone conversation, twisted it, spun it, and exaggerated it, into a constitutional crisis that they now blame on the president.