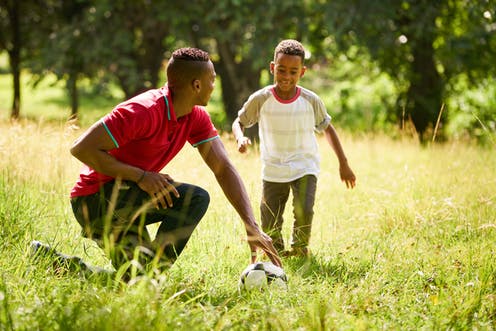 During his heartfelt Golden Globes speech, Tom Hanks said his five children are braver, stronger, and wiser than him. Please do not think I am beating up on Tom Hanks. I am simply pointing out that Hanks downplaying his fatherly position is a mindset we see reflected in practically every family movie and sitcom today.

We have gone from TV shows like “Father Knows Best” to countless shows in which father is portrayed as an idiot, the butt of jokes, often spoken to with disrespect from his wife and children.

As a child, my black family loved watching The Andy Griffith Show. Like Andy's son Opie in the show, my four siblings and I had great fun with our dad. And yet, we knew our place, never daring to speak to him with disrespect.

I have turned off movies and TV shows because I could not stomach the disrespectful way children spoke to their father, lecturing dad and displaying arrogant disobedience.

Hollywood, Democrats, and fake news media believe children are wiser than their parents, especially their heterosexual white fathers. Children are told to steal their parent's guns and turn them over to schoolteachers. (1) Michelle Obama told students to monitor family discussions for racism. (2) Leftist school administrators say children should be allowed to have abortions and even pretend to change their sex through bodily mutilation without parental consent.

California leftist lawmakers believe that due to the backward, outdated thinking of parents, the government must make homeschooling illegal. (3) Leftists demand that children be handed over to government schools for LGBTQ indoctrination, taught to hate America, instilled with guilt for their white privilege, and taught to hate Christianity. Despicably, leftists have robbed children of hope for their future, teaching the absurd lie that the earth will be unlivable in 12 years because America is destroying the planet.

Leftists have transformed far too many children into virtual socialist/progressive terrorist sleeper cells, taught that they are wiser than their parents on every crucial political issue.

I remember an awesome moment with my late preacher dad in the early 1960s. It was a Sunday evening. Dad was in the living room, studying his Bible. I interrupted, telling Dad that I was terrified about going to school the next day. All of us kids from our tiny black suburban community in Maryland were being bused to Brooklyn Park, an all-white junior/senior high school. I was afraid that I may not be able to do 7th-grade work. I was fearful of attending school with whites for the first time, and I stuttered. Dad calmed my fears by assuring me that God was with me. “I can do all things through Christ who strengthens me.” Philippians 4:13

As I stated, I am not attacking Tom Hanks. His mindset regarding his position as patriarch reflects the dominant view of fatherhood in Hollywood.

The same way producers are copying Hallmark style movies to cash-in on their popularity, there is a gold mine awaiting producers of movies and TV shows which restore fathers to their rightful position.