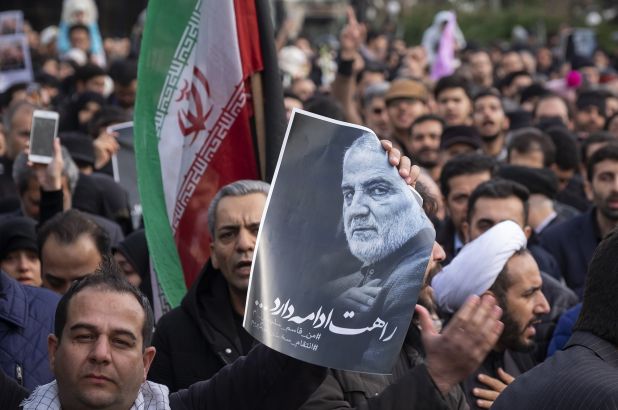 A notorious terrorist Qods Force commander, Qasam Soleimani was killed on January 3, 2020, in a U.S. airstrike near Baghdad International Airport. President Donald Trump ordered the strike because Soleimani was actively developing plans to attack U.S. troops and officials. Qasam has been responsible for the deaths of thousands of civilians and western military personnel. U.S. Central Command documents reveal that Soleimani’s command killed more than 500 U.S. Service members in Iraq between 2005 and 2011. He was linked to an assassination attempt on Saudi Arabia’s Ambassador to the United States.

In November 2019 Iran-backed airstrikes killed an American citizen and wounded four soldiers. The U.S. Military then struck targets in Iraq and Syria killing two dozen Kata’ib Hizbollah Iranian paramilitary. Following that, Iranian paramilitary and protestors stormed the American Embassy in Baghdad. Setting fires and destroying whatever possible, chanting “Death to America,” they plastered anti-American graffiti on walls. American personnel were trapped inside. President Trump vowed, “This will not be another Benghazi.”

Immediately 100 Marine Air-Ground Task Force troops were deployed from Kuwait to that American Embassy. 750 more soldiers were deployed to the region and battleships were re-routed to the Gulf. Marines arrived. Protestors left. Soleimani was taken out the next day.

Missile strikes were fired on US Air Base Ain-Assad in retribution of Soleimani’s death. President Trump confirmed that damages were not serious and no Americans were killed.  Sanctions will be increased in retaliation for the strikes. The government-run Islamic Republic of Iran Broadcasting asserts that over 80 American Troops were killed and 200 wounded.

Soleimani’s acolytes praise him and claim that his death will destabilize the Middle East. One might question who professes knowledge of a stabilized Middle East. History does not evidence such.

Barak Obama signed the Iran Nuclear Agreement in 2015, withholding information about side deals such as the $400 million in hard currencies and $1.3 billion cash in flights to Tehran.

The world’s largest sponsor of terrorism, Tehran would threaten the world if it had nuclear weapons. President Trump pulled out of the Nuclear Agreement and instituted sanctions to weaken Iran’s leaders.

Protests that spread across Iran started with an increase in gas prices. The Islamic Revolutionary Guard Corps placed forces in streets and squares across the country. Protestors/resistors want regime change.  Mullahs are corrupt millionaires, money is spent on proxy wars in Syria, Lebanon, Gaza, and Yemen and not at home with high unemployment, and a weak currency. More than 3,000 have been killed, and thousands arrested with reports of torture. The tremendous violence and organized resistance is concealed by the media. The Secretariat of the National Council of Resistance of Iran publishes pictures of martyrs daily.

Iranian media outlets show tear-stained Ayatollah Khamenei, Prime Minister Javad Sharif, and thousands of so-called mourners bestowing benevolent status to Soleimani. The Resistance is torching Soleimani’s posters across the nation. The Bassij Paramilitary Base was set ablaze. Wouldn’t it be magnificent if Soleimani’s death provides a lightning rod for freedom seekers to sweep the board of Iran’s leadership!