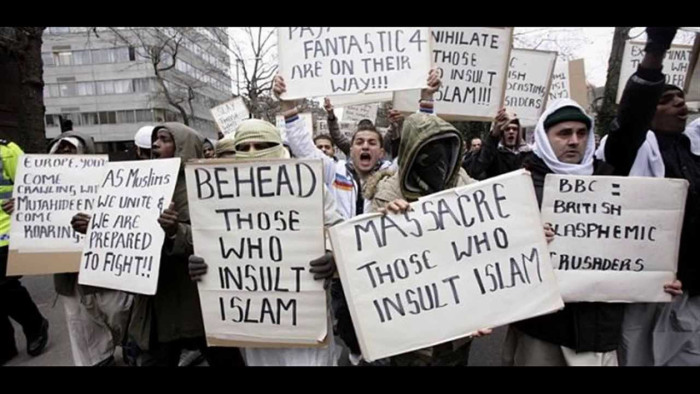 Peaceful nations have nothing to fear from backslidden Muslims (moderates), but traditional Muslims (whether Sunni at 940 million, Shiite at 120 million, or the other offshoots) are zealots with an obligation to convert the world to a massive caliphate. While the various sects have a hot, holy hatred for each other, they will temporarily suppress the desire to send other Muslims to Paradise so they can kill the infidels (non-Muslims) and establish a global caliphate.

Syria is a very unique country: primarily a Sunni nation with a strong Shiite minority. President Assad belongs to the Alawite minority, an offshoot of Shiite Islam that is supported by Iranian Shiites. This love affair between Iranian and Syrian Shiites is the reason the area is a bubbling volcano.

The Sunni sect thrives in most Islamic nations (Syria 85%, Saudi Arabia 90%, Egypt 90%, Jordan 90%, Turkey 65%) while the Shiites dominate Iran 90% and Iraq 65%. Hatred between Sunnis and Shiites going back to the death of Mohammed and his successor is currently expressed in the tragic Yemen (Iran’s proxy) war funded by Saudi and the U.S. with massive arms sales by the U.S. and Britain.

Saudi Arabia and the U.S. should stop the slaughter in Yemen and let Saudi and Yemen (Iran) settle their own religious and political differences.

An honest writer will always write the truth about Islam (and all things) and will never refuse to expose a lie. Fact: Islam is the Jonestown Cult without the Kool-Aid. It is dishonest, dangerous, and deadly. I plan to tell the truth with total disregard for political correctness.

Islam has a 1,400-year history and has two “holy” books that clearly delineate what they believe; however, most people refuse to read them. Moreover, numerous Muslim scholars have expounded on their holy books so the dullest person has no excuse to be deceived into thinking Islam is a "peaceful religion." People who believe that failed World History - in high school.

Moreover, they obviously know nothing about world events in the last 20 years.

And for college graduates to believe that traditional Islam is peaceful requires a huge gulp of Kool-Aid.

Islam was started by an illiterate moon worshiper named Mohammed (spelled many different ways) - a pagan, slave-holding, sexist, thieving pedophile. If gasping Progressives will correct me, my apologies will follow.

Muslims have boasted how slowly Christianity gained prominence while Islam gained prominence so quickly. I pointed out that Christ’s basic message is love and Mohammed’s is hate. Christians used the Word while Muslims used a sword to conquer.

Muslims are still altering nations, as free nations are being overwhelmed by Muslim immigrants who are swiftly changing the nations’ cultures. England is no longer England. France is no longer France. Germany is no longer Germany. And America is no longer America. Many don’t think that matters but I do. Moreover, we are fools if we don’t recognize the enemy among us.

I authored ISLAM: America’s Trojan Horse! in 2003 with second and third editions in 2009 and 2012 suggesting “the day [is] coming when our glorious Republic will only be remembered as a noble experiment between the great oceans. In kindness, we have permitted aliens inside our nation who have no intention of being absorbed into our ‘melting pot.’ They believe in the ‘salad bowl’ theory. Muslims will not adopt our ways and be assimilated into our culture. They are determined to change our culture, laws, and religion as they have in England, France, and other nations.”

I first wrote that in 2003. It is far worse than I anticipated. European nations have never seen such a massive change in their culture as observed by the invasion of immigrants from the Middle East and Africa. If American leaders would simply open their eyes, they could see the same thing happening here. It is almost too late to stop the massive shift in our national life.

There are 3000 mosques in America and 80% of them are controlled by the most extreme Wannabee sect in Saudi Arabia. It is interesting that there is not one church, of any kind, in Saudi Arabia! I have challenged Muslims and US progressives who are so sensitive about equality and diversity and fairness to help me start the Trinity Baptist Church in Mecca but I’ve had no response from the self-righteous hypocrites.

Most politicians are too gutless to read and acknowledge the facts. It is much easier to question my sanity, my sincerity, my ability, and my parentage than to respond honestly.

The Hamas Charter demands that "Israel will exist and will continue to exist until Islam will obliterate it;" therefore, all Hamas followers are obligated to drive Israel into the sea. The Ayatollah Ali Khamenei agreed, "Israel is a cancerous tumor that should be cut and will be cut."  It is significant that Psalms 83:4 revealed this hatred millennia ago: "They have said, 'Come, and let us wipe them out as a nation, that the name of Israel be remembered no more.’”

Yasir Kazi is not a backslidden Muslim but an American imam (Ph.D. from Yale) and former professor at Rhodes College in Memphis, Tennessee. He has taught that Christians are “filthy” in the sight of Allah. He compared us to feces and urine saying we are the “most evil of evils.” But that’s his mildest charge against us. This dude has been characterized by The New York Times magazine as “one of the most influential conservative clerics in American Islam.” What else does that “conservative” teach? He tells his students to rape, steal, and murder any who do not convert to Islam, yet he has never been arrested!

Imam Mohamad Adam el-Sheikh, Ph.D. from Temple University, told the Washington Post that suicide bombings are acceptable "if certain Muslims are to be cornered where they cannot defend themselves…” He is also the head of the Islamic Judiciary Council of the Shari’ah Scholars’ Association of North America.

Few Americans know that such a group exists. Sharia law is based on the Koran and the Hadith, the sayings and actions of Mohammed. Many Muslims believe they should live under their religious law and not under state or federal laws. Some states have passed laws making it illegal for any court to consider any foreign laws in making decisions. Since Muslims consider sharia law as divine and cannot be changed, a major train wreck is ahead.

Most people are fearful of criticizing or even questioning Muslims since they are a preferred, protected, and pampered class thanks to a gutless media and know-nothing academia.

World leaders have displayed political correctness and personal cowardice in dealing with Islam, becoming tools for Muslims to advance their cause. Such leaders will be recognized as cheerleaders for their own destruction. Leaders who are afraid of adverse public opinion and being labeled "conservative" (gasp!) or "Fundamentalist" (gasp! gasp!) are moral cripples who are not aware of their limp and crooked walk.

Such leaders, in crises, are as useless as a milking stool under a bull.