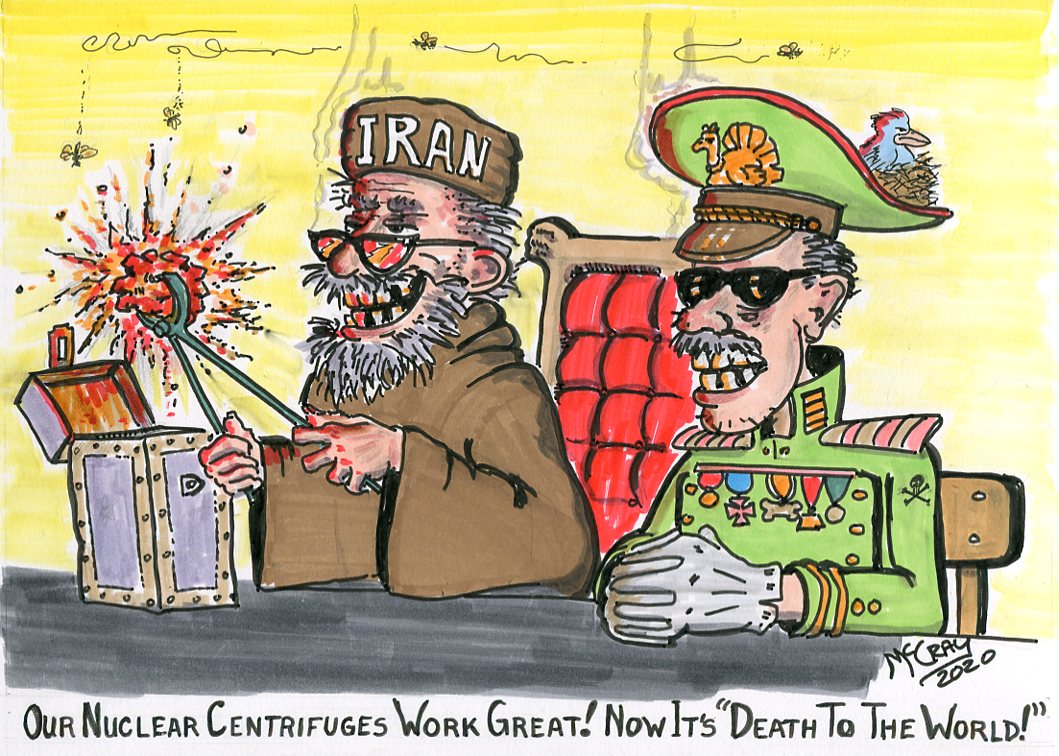 In Iran, the Friday chant has always been “Death to the U.S.A.” Now Iran wants to be more inclusive out with “Death to the World.” For many years it has been the United States and Iran giving each other the stink eye, recently Iran has added other countries to their stink eye list. Iran has been under U.S. sanctions for years for their bad behavior and has violated one agreement after another regarding their enrichment of Uranium with nuclear particle separating centrifuges.

President Trump withdrew the United States from former President Obama’s agreement with Iran due to the continuing violations, and piled on more sanctions. France, Britain, and Germany are looking at sanctions over their concerns, that Iran is not meeting its commitment. The problem that exists is that Iran never signed onto the Iran Nuclear Deal.

As noted by Guy Benson in the Townhall article of 30 Nov 2015, he reported “President Obama didn’t require Iranian leaders to sign the nuclear deal that his team negotiated with the regime, and the deal is not “legally binding,” his administration acknowledged in a letter to Representative Mike Pompeo (R.,Kan.) obtained by the National Review. “The Joint Comprehensive Plan of Action (JCPOA) is not a treaty or an executive agreement, and is not a signed document,” wrote Julia Frifield, the State Department assistant secretary for legislative affairs, in November 19 (2015) letter. Frifield wrote in response to a letter Pompeo sent Secretary of State John Kerry,” the so-called Nuclear Deal with Iran is a total scam. The entire effort smells like a crooked deal that is all about money, Iran got a big pile of money, $150 Billion dollars, and their markets were opened for deals with Europe. Most important for President Obama, he got to feed his immense ego with a legacy treaty for the history books, a total sham, and you have to wonder about kickbacks.

The possibility that the European Countries may apply sanctions against Iran has drawn the ire of the Iranians who are issuing threats to the Europeans. On 15 January 2020, the President of Iran, Rouhani stated, “Today, the American Soldier is in danger, tomorrow the European soldier could be in danger.” Comments like this aren’t exactly surprising, the supposedly religious leaders of Iran are nothing more than a bunch of thugs, War Lords wearing religious garb. They present themselves as pious religious leaders, yet they repeatedly demonstrate a vicious ruthlessness in supporting terrorism around the world and attacking anyone who disagrees with them.

The world has a right to be concerned about Iran acquiring the capability to create weapons-grade uranium and having a nuclear-capable missile system. Iran has threatened the United States and other countries in the middle-east and Europe for 40 years. They routinely promise and threaten to wipe the State of Israel off the face of the earth. It is foolish to believe that Iran will negotiate in good faith; Iran understands one thing, and that is hard-hitting force. The death of Iran’s thug enforcer, Soleimoni, the mastermind of their terrorist programs has gotten Iran’s attention. They have found out that President Trump isn’t going to play pat-a-cake, and given the right reason will destroy them.