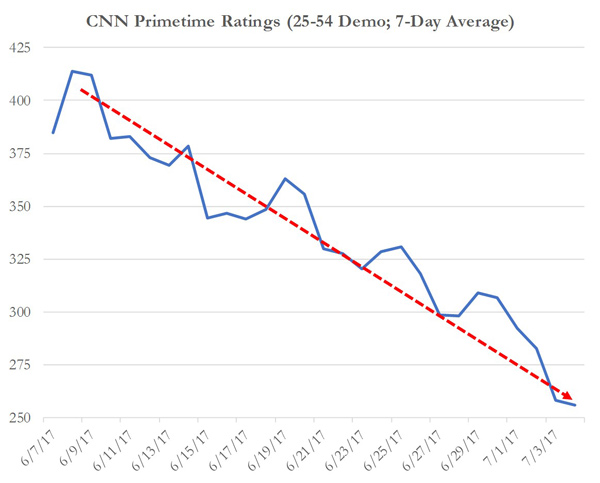 If anyone ever had a doubt (and most thinking people don’t) that the smug and arrogant Democrat elite have nothing but contempt for working-class middle Americans, you have no further to look than a bastion of partisan hackmanship...CNN.

Over the past decade, CNN has degenerated into nothing less than a collection of childish, partisan hacks acting as mindless parrots for DNC talking points. The recent segment of Don Lemon's incredibly low-rated, temper-tantrum filled show should dispel any lingering doubts.

In an on-air interview, one of Don’s guests said of the president and Conservatives, eliciting a laugh from Lemon,


"He knows that this is, you know, an administration defined by ignorance of the world. And so, that's partly him playing to their base and playing to their audience. You know, the credulous boomer rube demo that backs Donald Trump.”

And one other thing: If conservative Fox News opinion hosts had cut a similar clip during the Barack Obama administration, the left wouldn’t have just screamed. Leftists would’ve launched a call for boycotts of the Fox show advertisers. Obama supporters, Obama voters would’ve demanded the Fox host be fired.

But because Lemon is a liberal and hates Trump, his job is safe, his position secure. The double standard of liberalism marches on.”
https://www.washingtontimes.com/news/2020/jan/28/don-lemons-disgusting-air-mock-trump/

Now we all know that the Left-stream media are and always have been, vicious and smug in their hatred of traditional America and all Americans who love their country and the 'freedom for which it stands.’

But the more important question is this - why are they allowed to consistently get away with it?

Why isn’t the party that is so quick to cast the first stone ever called out for their own hypocrisy?

Perhaps most disturbing of all is the question “Are there still any ‘moderate’ Democrats left who are bothered by this outrageous double standard?"

Has the entire Democrat party devolved to the point where anyone who still votes Democrat has become so twisted with animus towards American values that they actually cheer on the likes of Don Lemon, Pelosi, and Schiff?

Or is it simply that they are not paying attention?

We know that today's students in both primary and secondary education have been deliberately and shamefully brainwashed and radicalized by their so-called 'teachers' and 'professors,' who themselves were brainwashed by decades of Liberal propaganda masquerading as the educational elite and the ‘mainstream media,’

We now know that Left-wing media have not been ‘mainstream’ for the past 50 years, but merely tools of the DNC.

And by now even the dimmest bulbs in the political spectrum are well aware of that so the left-wing media don’t even bother to hide their bias.

Thus it must be construed that those who pay attention to left-stream media realize their partisanship - but either they don’t care or they agree with it.

The question is - how many of those who pay attention to the DNC propaganda consider themselves to be ‘traditional’ Democrats and not part of one of the myriads of angry, violent splinter groups that the party increasingly seems to consist of? Are there still any centrist Democrats who are unaware of how radically left their party has gone but just vote that way out of generational habit?

Or could it be that the answer to that question might sadly be that the term ’traditional, moderate democrat’ may be just like the term, 'impartial mainstream media’ - an outdated and obsolete remnant of the past?