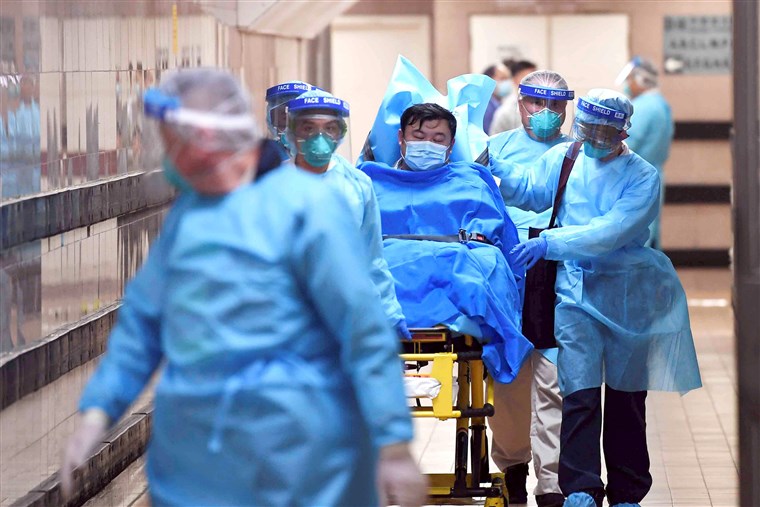 Many Chinese cities are experiencing pure panic as the coronavirus has spread to seven other nations. North Korea has shut its borders to all tourists. America has one case in Washington state and another in Chicago.

We are only a short plane ride from Europe and Asia so expect many more. Health experts issued a menacing warning about “a coronavirus pandemic 3 months ago. Their simulation showed it could kill 65 million people.”

That was three months ago yet only now are health and political officials taking action - maybe too little, too late.

The London Daily Mail reported on January 24 that the Chinese were “building a 1,000-bed hospital in FIVE DAYS to deal with the crisis.” The mysterious virus has infected 4,500 people in China and killed 81 around the world as of the last of January. The major cities are closing roads and stopping public transportation. The disturbed Chinese officials have locked down fourteen cities in a desperate effort to restrain the spread of the lethal virus.

As usual, health officials and politicians are underestimating the threat according to the BBC: The number of infectious carriers of the mystery virus “is far greater than official figures suggest, scientists have told the BBC.”

Dr. Guan Yi, a leading virologist who helped tackle the SARS epidemic in Asia in 2003 is director of the State Key Laboratory of Emerging Infectious Diseases at the University of Hong Kong. Dr. Yi confessed to Chinese media that the virus “was already uncontrollable in Wuhan (11 million residents) where it started."

Dangerous, debilitating, even deadly diseases have produced massive problems of civil disorder, disruption of labor, economic disaster, insurrection, and the demise of whole populations in many nations. America is no exception.

It would be helpful to learn from the plague of Saint Cyprian and not make the same mistakes people of that day made.

In 250 A.D., the Roman Empire was in turbulence. The Goths had just won a major victory and the barbarians were at the gates of Rome. Barbarians originally meant any non-Greek people but eventually came to mean “a brutal, cruel, warlike people.” Then the plague of Saint Cyprian lashed the empire for fifteen years with wave after wave smashing the same areas. Its spread was facilitated by numerous military activities that were going on throughout the provinces. It was a time of terrible tragedy that pushed people to the brink of despair.

The following shocking account by Heinrich Häser, a German medical author, might be a warning of the possible future for present-day China and America. He declared that people “crowded into the large cities; only the nearest fields were cultivated; the more distant ones became overgrown, and were used as hunting preserves; farmland had no value, because the population had so diminished that enough grain to feed them could be grown on the limited cultivated areas. Hieronymus wrote that the human race “had been all but destroyed.”

Much of Italy was altered because of this epidemic. Large parts of the landscape were depopulated and left vacant. Swamps appeared and the earth was returning to a primitive state of deserts and forests. Disease was changing the face of the earth in every way. Numerous problems in the palace and nasty bickering on the battlefields defeated the army before battles were fought. Often, the soldiers served uncompensated because the disease exhausted the wealth of the Empire. Angry, unpaid soldiers bolted into the forests, and took what they wanted from the populous, trying to live off the land. Military insurgences, civil disorders, and domestic wars became common while the Roman Empire continued to crack along its foundations.

Desperate laws were approved during times of disease, disruption, and death as during Diocletian's reign (ruled 285-305). It became illegal for farmers to leave the farms to take up other jobs and some occupations were made hereditary. Such laws required a son to follow his father's trade or profession. Of course, it was tyrannical but when you are poor with no future, the chain doesn't seem too heavy! It was just one more burden to bear.

It seems Caesar had trouble “keeping them down on the farms” once they had been to the city. Furthermore, after seditious soldiers robbed the merchants and farmers and the tax collectors seized their money and crops (calling it - like today - taxes), the country people looked for other means to make a living. The oppressive laws forcing people to work at certain occupations were passed because famine and disease had killed so many of the workers leaving crucial trades vacant.

The moving armies, fleeing citizens, and famine all contributed to conditions that were inviting disease. By the fifth century, the once-mighty empire was collapsing as the Vandals, Goths, and other barbarians were beating on the gates of Rome. (Many barbarians were already in the Empire having crossed the Pyrenees into Spain.) The Visigoths, led by Alaric in 410 were the first of the barbarians to sack Rome; however, Alaric's hopes of glory faded when he developed symptoms of malaria and soon died. His successful storming of the city signaled the final decline of the Roman Empire in the West, but it had been crumbling for many years from numerous internal problems. The mighty Alaric failed in his conquest and died because of a mosquito bite!

The Vandals appeared at the gates of Rome in 455, entered for a few weeks, and then left for Carthage! Angelo Celli suggested they were driven out by malaria and thousands of infected people threw themselves into the Tiber River to hasten death to escape lingering pain. It was a time of famine, fear, and fighting - and pestilence. At this time, as if Rome was not having enough trouble, faraway Britain experienced a relentless epidemic.

The mighty Roman Empire was convulsing and gasping for breath during the very troubled early fifth century as determined barbarians moved in human waves from east to west and were now ensconced along the Danube River, in Roman territory. Earlier, they had knocked down the gates of Rome and had settled in Italy, Gaul, and Spain. Now they were interested in Britain. Vortigern, Britain‘s leader, had his back to the wall as he faced other barbarians from the north (the Picts and Scots), and the Venerable Bede reported that Vortigern called upon the Saxon chiefs, Hengist and Horsa, for help. Desperate leaders thought it wise to settle barbarians within their empire to furnish troops to aid in the defense of the empire. It worked–for a while.

Bede wrote: "…a severe plague fell upon that corrupt generation [Britain], which soon destroyed such numbers of them, that the living were scarcely sufficient to bury the dead…They consulted what was to be done, and where they should seek assistance to prevent or repel the cruel and frequent incursions of the northern nations; and they all agreed with their King Vortigern to call over to their aid, from the parts beyond the sea, the Saxon nation; which, as the event still more evidently showed, appears to have been done by the appointment of our Lord Himself, that evil might fall upon them for their wicked deeds."

Apparently Britain‘s fighting forces were greatly depleted by the plague. The Saxons arrived in 449 and acted as mercenary guards for the Britons. The Brits discovered that their "help" was to be another "plague" upon their island. Everything would be different because of the Saxons, who came to help but ended up being a plague. Bede recognized that the pugnacious Saxons were a curse from God because of Britain's wickedness.

Hans Zinsser, physician and author, concluded: “It requires little exercise of the imagination, therefore, to conclude that the history of the British Isles in all its subsequent developments of race, customs, architecture, and so forth, was in large part determined by an epidemic disease.” Britain would never be the same because of an invisible bug!

America is no exception and could be rendered a drained, defeated, even destroyed nation because of a deadly disease.