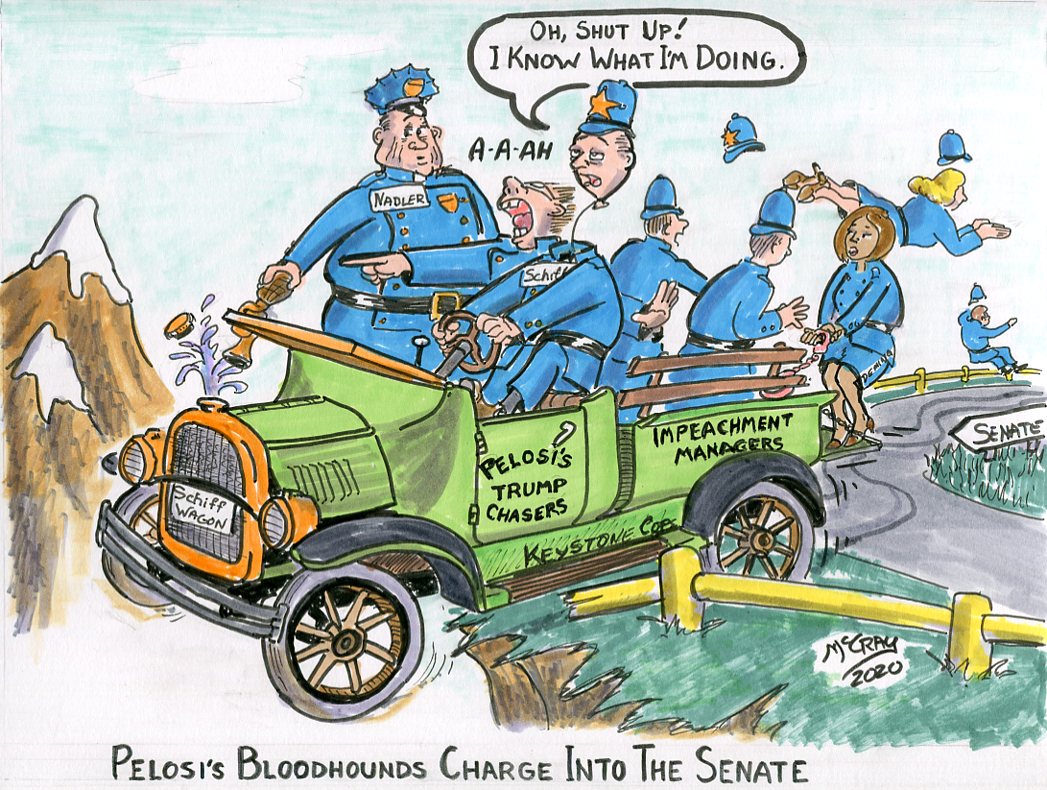 It has been excruciatingly painful enough to listen to Speaker of the House, Nancy Pelosi’s bloodhounds bellowing and whining in the House of Representatives. With all of the finesse of the Keystone Cops of the old silent movies, Rep. Adam Schiff (D-CA) and Rep. Jerold Nadler (D-NY) have spewed piles of fiction about President Trump and entered that garbage into the Congressional Record as fact.

After 86 days of the frantic panic of we have to impeach President Trump as fast as possible, because he is a threat to national security, everything else came to a screeching halt. Well, Nancy Pelosi got her impeachment of Trump and danced out to sign the Impeachment with her autographed commemorative ink pens, in a ceremony mocking a presidential bill signing. Nancy Pelosi was smiling and giggling in a supposedly very solemn ceremony sending the impeachment to the Senate. She is thoroughly enjoying herself while repeatedly announcing that Trump is Impeached for Life.

After all the rushing around in panic mode, everything stopped for three weeks. Pelosi had the idea that she was in charge and tried to dictate her rules to the Senate; fortunately, it was made clear that her authority ended at the doors of the House chambers. Now she is sharing her bloodhounds with everyone in the Senate. Schiff and Nadler along with their team of Impeachment Managers marched over to the Senate Chambers in an absurdly overly solemn procession. Carried live on TV by the fawning left-wing press, they treated the event like a funeral procession of royalty with mournful commentary.

The two impeachment charges from the House of Representative, the Abuse of Power and Obstruction of Congress, have been wrapped in a pile of innuendos and false allegations. All of the charges are based on hearsay or "I thought I heard," of so-called witnesses; all but one were opinioned witnesses and the one witness of fact backed up the president's statements. The Obstruction of Congress charge is based on the president’s efforts to challenge Congressional Subpoenas in a court of law, which is not obstruction of Congress. It is the same accepted legal path as used by all previous presidents, and it is a violation only in the corrupt mind of the left. It must be remembered that the left has stated several times that Trump must be impeached because he will be re-elected.

The Senate trial of President Trump started on Tuesday 21 Jan 2020, with Chief Justice Roberts presiding. The House Managers repeated the same wild allegations from the House with a new twist, telling the Senate if they acquit Trump, they are covering up for Trump. Under the rule of law, the accused is innocent till proven guilty. The Left is asserting in this case, the accused must prove his innocence. The president's legal team headed by Jay Sekulow have had to repeat the provisions of the Constitution regarding what defines an impeachable offense. As well they have gone over the transcript of President Trump speaking to Ukraine’s President Zelensky.

A byproduct of the Senate Trial is keeping four Senators off the campaign trail leaving former VP Joe Biden without major competition. In a Senate trial, the Chief Justice presides as the sitting judge and the Senate is the jury, all of the fact-finding and presentations are the responsibility of the House of Representatives.

If the House Managers succeed in getting the Senate to call witnesses, they have changed the structure of future Senate trials. The House would be able to push a flimsy impeachment with limited effort on their part and force the hard work of discovery onto the Senate.

This would prevent the Senate from conducting any other business whenever an impeachment trial is in progress. This would fundamentally change the structure of the congress by altering the balance of our co-equal form of government - maybe this is what Nancy Pelosi is after.