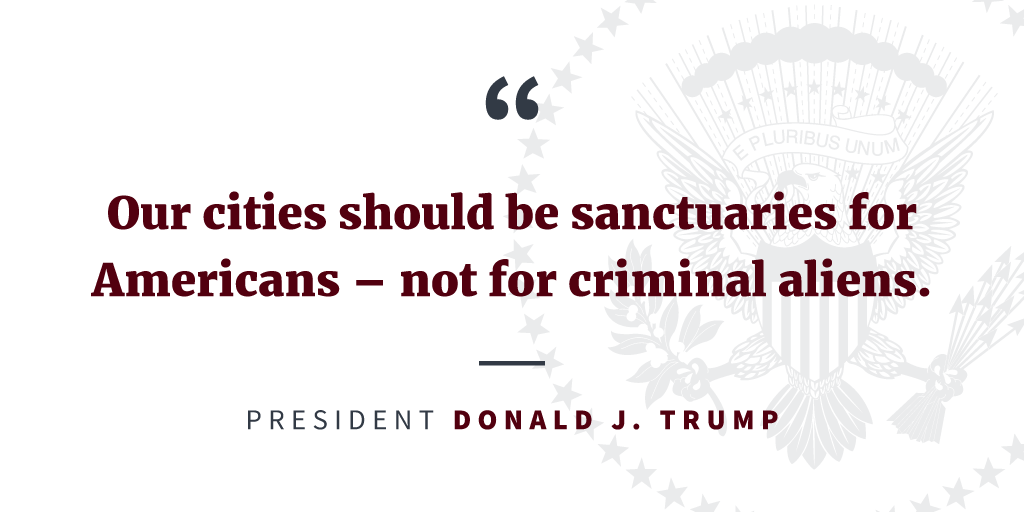 The concept of what we now know as "sanctuary cities" had its origin in the early part of the 1980s, and had its roots in religious philosophy, and resistance movements throughout recorded history. It was at this time, in defiance of the United States government policies to grant asylum to Central American immigrants, that faith-based organizations challenged the policy and became the impetus that drove the sanctuary movement.

There are 27 states that harbor municipal jurisdictions that willfully limit their cooperation with the federal government. Sanctuary cities, counties, and in some cases states have enacted ordinances and regulations that in fact create safe havens for immigrant communities that obstruct Immigration and Customs Enforcement (ICE), and in many cases shield the criminal element.

Sanctuary states, which describe the entire state, include: California, Colorado, Connecticut, Illinois, Massachusetts, New Jersey, New Mexico, Oregon, and Vermont. The 27 states mentioned previously have approximately 564 jurisdictions that have implemented sanctuary policies. Agencies within these jurisdictions will either impede or refuse to comply with ICE detainers that seek to interview incarcerated aliens, and possibly take them into custody for deportation.

America is an exceptional land, where hopes and dreams can come through. Who among us would deny any person who seeks a better life for themselves and their families, the opportunity to become a citizen of this great nation? Keep in mind, however, that though most are good decent people, they broke the law and are in this country illegally.

The concept of the sanctuary jurisdiction is to give these less fortunate souls, who in some cases fled violence and persecution in their native land, an opportunity to live in freedom. However, there can be harsh, violent, and even deadly consequences. There have been instances where ICE agents have been rebuffed and the undocumented immigrant, who was in custody for some infraction, is released to commit other crimes.

Case in point, Raaez Khan is a 21-year-old undocumented Guyanese immigrant. Last November Khan took a broken jagged-edged mug and struck his father in the chest and arm. He was arrested on an assault charge, and then released without bail, despite a federal ICE warrant that he be held for deportation. Earlier this month in a vicious and cold-blooded act, Khan attacked 92-year-old Maria Fuertes, knocking her to the ground and then dragging her between parked cars. Khan raped the beloved neighborhood resident and then beat her to death.

Acting Immigration and Customs Enforcement Director Matthew Albence criticized NYC Mayor de Blasio and the city’s sanctuary policies, stating both were to blame for the death of Maria Fuertes. “Make no mistake, Albence went on to say, this city’s sanctuary policies are the sole reason this criminal was allowed to roam the streets freely and end an innocent woman’s life.” An incensed Albence, flanked by members of the NYPD’s Sergeants Benevolent Association, added: “If we had been able to cooperate with the NYPD, Maria Fuertes would be alive today," and then added, "too little, too late.” The mayor's office responded that the death of Maria Fuertes was a tragedy but “Fear, hate, and attempts to divide are signatures of the Trump administration, not New York.”
In a report issued by ICE, the city last year complied with just 10 of more than 7500 detainer requests for illegal immigrants charged with or convicted of various crimes including 200 homicides, 500 robberies, 4500 assaults- 1000 of which were sexual - and 1000 weapons offenses.

Sanctuary domains across the nation are implemented and governed strictly by Democrats. They would have the American people believe that their intent to impose this policy that defies federal law and can threaten law-abiding citizens, is to avoid immigrant families being broken up, not requiring willingness within these communities to report crime, and not restricting the use of social services for their welfare and education of their children. Many believe however that this is a self-serving and devious ploy by Democrats for what could be prospective votes.