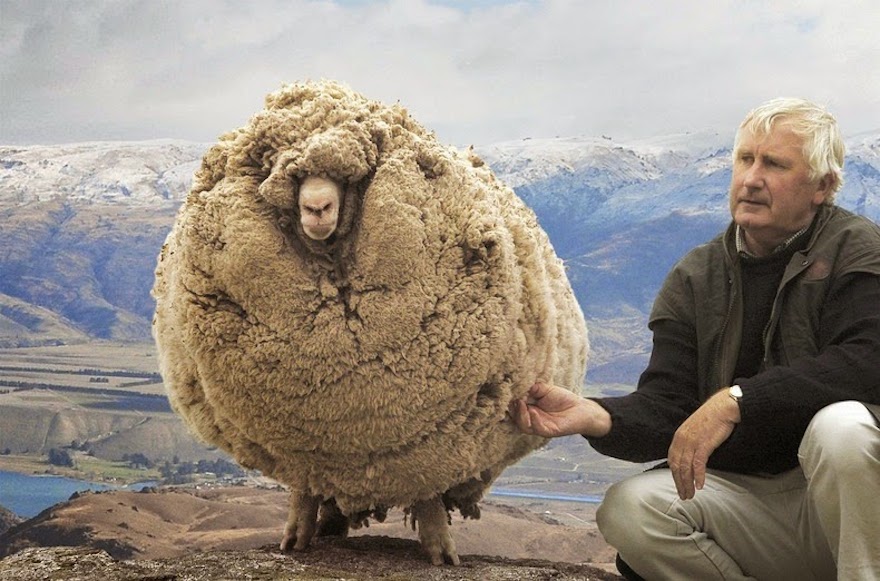 Most of you would have seen the movie Shrek. In the movie, Shrek was a fictional ogre, with quite an attitude, and a great Welsh accent. Shrek liked to be alone, didn’t want to socialize much, and was, shall we say, grouchy. He liked being dirty and unkempt.

Shrek was a male sheep belonging to Bendigo Station, a sheep station near Tarras, New Zealand. He gained international fame in 2004 after he avoided being caught and shorn (sheared) for six years. Male sheep are normally sheared annually, but Shrek apparently hid in caves, avoiding being caught in the sheep gathering times called musters.

Shrek was finally caught on April 15, 2004. The over-grown sheep, who looked like a walking, dark grey blimp, was sheared by a professional in twenty minutes. The shearing was broadcast on national television in New Zealand. His fleece contained enough wool to make twenty large men's suits, weighing sixty pounds. An average fleece weighs around ten pounds.

Shrek became a national icon. He was taken to parliament to meet the then New Zealand Prime Minister, Helen Clark, in May 2004, to celebrate his tenth birthday. In November 2006, thirty months after his initial shearing, Shrek was shorn again, on an iceberg floating off the coast of Dunedin, New Zealand.

Let’s talk about Shrek. For six years, Shrek carried six times the regular weight of his fleece, simply because he was away from his shepherd. That’s a lot of weight to carry around, especially when you are hiding in caves and climbing high mountains to avoid being seen. There was not much companionship either. When the other sheep saw him, they probably thought he was a mutant, zombie sheep or something. He wasn’t going the pull the wool over the other sheep’s eyes. Do ‘ewe’ know what I mean?

Notice Shrek’s downward spiral and upward ascension. First, Shrek wandered away by himself. Then he hid in caves and nooks and crannies, hiding from the shepherd. Next, Shrek accumulated extra weight of his own doing. It was a weight he didn’t need to carry but the carried it anyway. I would imagine that sixty pounds of extra weight slowed him down to a crawl. It certainly made it tougher to balance on those craggy rocks and cliffs.

This reminds me of ‘us’ human race type of sheep. We do the same thing Shrek did. We wander, we hide, we get dirty, we accumulate the weight of broken relationships and wrong choices. We get lonely. We get needy. Then we reap the consequences of what we have sown and as that Beatles song says, “Boy, we gotta’ carry that weight, a long time.”

A noted South African speaker, Greta Wiid, says it this way. “This reminds me of John 10 when Jesus compares Himself to a shepherd, and His followers are His sheep. Maybe it’s a stretch, but I think Shrek is much like a person who knows (or knows about) Jesus Christ but has wandered. If we avoid Christ’s constant refining of our character, we’re going to accumulate extra weight in this world—a weight we don’t have to bear.”

If you are carrying a pretty big load of ‘stuff’ today, consider this story. One day a biologist observed an ant carrying a piece of straw which seemed a big burden for it. The ant came to a crack in the earth, which was too wide for it to cross. It stood for a time, as though pondering the situation. Then the ant put the straw across the crack and walked across it as a span. “What a lesson for us!” the impressed biologist said. “The burden can become the bridge for progress.”

That’s right. Our mistakes and mishaps can become a bridge for progress if we will just return to the shepherd.

Somehow, during this time, the shepherds found Shrek or Shrek found them. When Shrek was found, a professional sheep shearer took care of Shrek’s fleece in twenty-eight minutes. Shrek’s sixty-pound fleece was finally removed. All it took was coming home to his shepherd.

Like Shrek, the prodigal sheep did just return. God has one message for all of us Shrek’s out there… “Just come home!” No matter how far we wander, Jesus will always run back to welcome us.” God never departs from us, but it seems like only with difficulties do we return to God.

Here’s a scripture verse for us today. This is Jesus talking.

“Come to Me, all you who are weary and burdened, and I will give you rest. Take My yoke upon you and learn from Me, for I am gentle and humble in heart, and you will find rest for your souls. For My yoke is easy and my burden is light.” Matthew 11:28-30

So, there is the real-life story of the other Shrek. Now that you know him, why not learn from him?