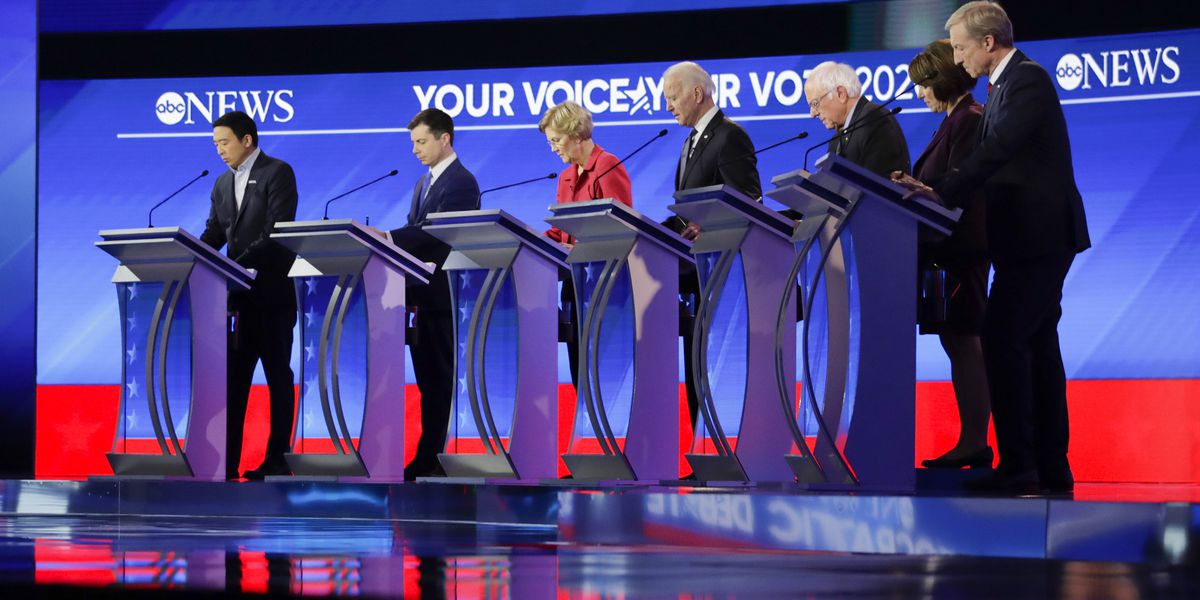 As the nation gets ready for a presidential election, the Democratic Party is in total turmoil. Their 2020 presidential candidates are not exciting to voters. There is a very large field of candidates, but none of them seem able to defeat President Donald Trump in the upcoming general election.

Among the candidates, no one has the charisma of Bill Clinton or Barack Obama. While each of the major candidates has supporters and is raising millions of dollars, the only candidate to create true devotion is U.S. Senator Bernie Sanders (I-VT), practically an octogenarian (78).

The polls show Sanders leading in Iowa and New Hampshire and he has just overtaken former Vice President Joe Biden in the latest national Democratic presidential nomination poll conducted by NBC News and the Wall Street Journal. He is leading in fundraising and has the type of dedicated volunteers not found in the other Democrat campaigns.

In the latest general election poll conducted by Investor’s Business Daily, Trump leads Sanders by two points. This confirms what most political analysts believe which is that Sanders cannot win a general election against the President. One of the major reasons is that Sanders is an avowed “Democratic-Socialist,” who has far-left positions on healthcare, the economy, climate change, and an array of other issues.

While Sanders is far to the political left, the United States of America is usually described as a “center-right” nation. Clearly, Democratic Party leaders understand that Sanders is too liberal to win a general election. This is why he is being discriminated against once again.

In 2016, the Democratic National Committee worked with Hillary Clinton to rig the nomination process and prevent Sanders from winning. In this election, the attacks on Sanders are intensifying. U.S. Senator Elizabeth Warren (D-MA) claimed that Sanders expressed a view in a private 2018 meeting that a woman could not win the presidency. Even though Sanders denied making the statement, anchors and reporters on CNN and other networks sided with Warren.

In recent days, Hillary Clinton jumped into the fray and made a disparaging comment about Sanders that will appear in a new documentary. In reference to Sanders, Clinton claimed that “nobody likes him, nobody wants to work with him, he got nothing done.”

This attack exposes the division between the establishment wing of the Democratic Party and the more progressive wing that is affiliated with Sanders. These groups disagree on policy, but agree on one thing, their hatred of President Donald Trump.

Democrats bet everything on the impeachment and conviction of President Trump. Now that it has failed, the American people are likely to blame Democrats for ignoring the problems of the country and focusing on the constant harassing of the President. Certainly, the President’s core support is not fading away. For the past few months, his support has been steady with an approval rating averaging in the mid to high 40’s.

The impeachment debacle has not harmed the President politically at all. In fact, his supporters seem more energized than ever. This week, he held a raucous rally in the “deep blue” state of New Jersey. People started camping out in front of the arena two days before the event. In an arena that held less than 8,000 people, there was an incredible demand for tickets with over 175,000 requests.

The Democratic presidential candidates are lucky to draw a few dozen people to their events. Thus, the contrast cannot be starker between the two parties.

Currently, the American economy is the envy of the world. With historically low unemployment, positive economic growth and record stock market gains, Americans are enjoying the best economic conditions in 50 years. This week, President Trump signed the new USMCA trade agreement which will spur economic growth even more. He has also made tremendous progress on a new trade deal with China. In response, Democrats are offering impeachment and socialism, not very attractive alternatives in good economic times.

The best way for Democrats to win was for President Trump to be convicted and removed from office by the U.S. Senate. They tried and failed to force additional witnesses to be allowed in the impeachment trial. This would have extended the trial, giving Democrats more time to uncover evidence damning to the President.

It was the same formula used in the Supreme Court hearings of Clarence Thomas and Brett Kavanaugh. Democrats lost those battles, and have failed once again with their latest obsession to remove President Trump from office. Fortunately, while the Democratic Party has lost, the American people have won a major victory.