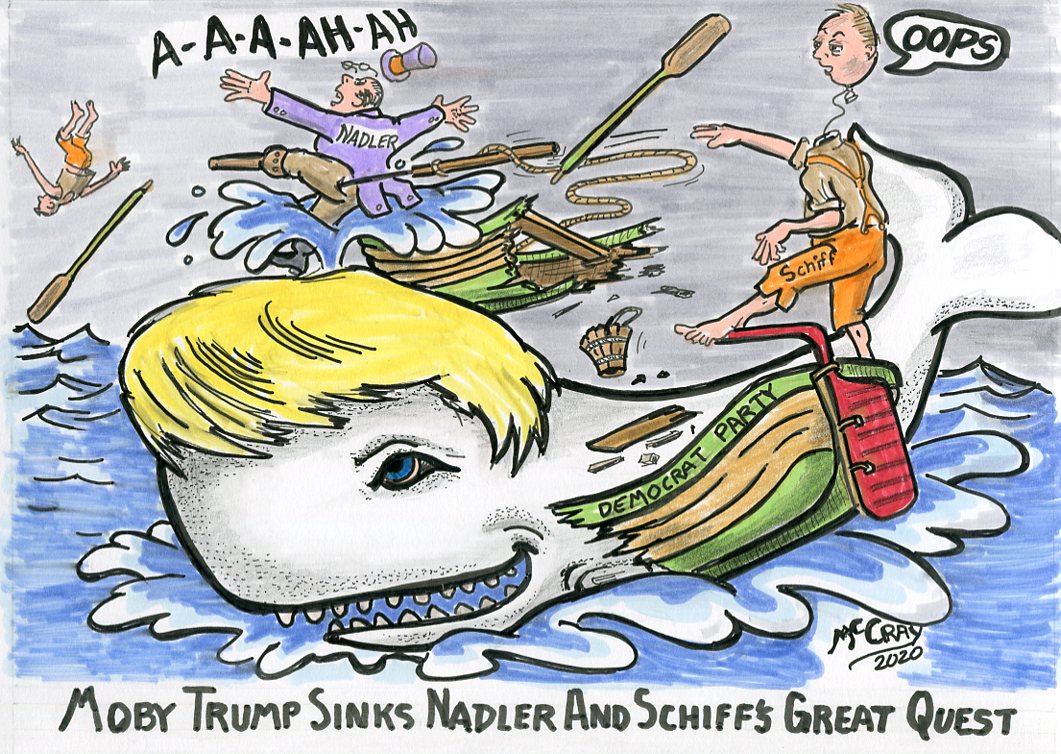 The attempt by the House of Representatives committee leaders Jerold Nadler(D-NY) and Adam Schiff(D-CA) to pull President Trump from office has been epic. It is much like watching the story of the Great White Whale, Moby Dick come to life in Herman Melville’s story of the insane Captain Ahab of a whaling ship, chasing the near-mythical white whale, Moby Dick. After a long drawn out voyage, trying to harpoon the great whale, the story comes to its climactic ending. The object of Captain Ahab’s hatred, Moby Dick rams and sinks his ship, dragging the ship’s captain to the depths.

After listening to the House of Representatives' kangaroo court action against President Trump, one would only hope that Moby Dick would take Nadler and Schiff to meet Captain Ahab. The House Managers led by Nadler and Schiff presented what they called conclusive evidence to the Senate in the Impeachment trial against President Trump. Day after day, the Democrat House Managers stood and droned the same accusations, complaints, and innuendos, over and over like a Himalayan monk droning an endless mantra, forcing the President's defense team to repeat the same answers over and over. No proof existed to warrant the removal of the President from office, but that didn’t matter, they even attacked the Senate, telling the Senators if they didn’t convict, then they were covering up for the President.

The Senate answered with an acquittal of the President, yet the House Democrats continued to say Trump was impeached. These are the same people who have said Trump became President with Russia’s help, but the acquittal makes the House of Representatives' Democrat Impeachment vote null and void.

Unfortunately, the Democrats seem to be more at home in the twilight zone, when the ink wasn’t even dry on the Senate Acquittal of Donald Trump. Before, they were calling for another impeachment and more investigations, wanting to subpoena former Presidential advisor John Bolton. The left-wing politicians and their cronies in the news media are worse than a pack of rabid Chihuahuas buzzing around the ankles of a cornered mail carrier.

During the Senate Trial, Adam Schiff made this statement when he tried to justify their actions, that “the president’s misconduct cannot be decided at the ballot box, for we cannot be assured that the vote will be fairly won.” Schiff is telling the people of the United States that we are too stupid and incapable of handling an election to decide the next president, that only these brilliant self-appointed geniuses are capable of making such a decision. The Democrats not only want to erase the results of 2016, but they also want to decide the 2020 election. This would establish the rule of a socialist single party to control the United States and elections would no longer be needed.

They are desperate, and the socialists that control the Democrat Party know they have been exposed and their grip is slipping. Trump has been undoing the controls that they have put in place over decades and they know it’s now or possibly never. The economy and employment is climbing, treaties that benefit the United States are being set in place, and our standing in the world is growing.

This why there have been all of these attacks on the 2nd Amendment, for they must disarm the people so that they can’t fight back. The sanctuary cities have been established to wreck our immigration system in an effort to overload and break down our social services. The education system has been derailed for decades, promoting entitlements, socialism, tearing down our democratic system, attacking the founding fathers, our founding documents, and demeaning our rights for all.

The sedition by the left is going to continue to ramp up with attacks at anything that will disrupt and confuse, undermining the country. The politicians on the left are promising everything will be free, but nothing is free. Everything is primarily aimed at the youth and young adults. The National Socialist Adolph Hitler said “he who owns the youth, owns the future;” Terrifying but very true; look at all of the political youth programs in socialist countries, as they are mirrors of the Hitler Youth program.