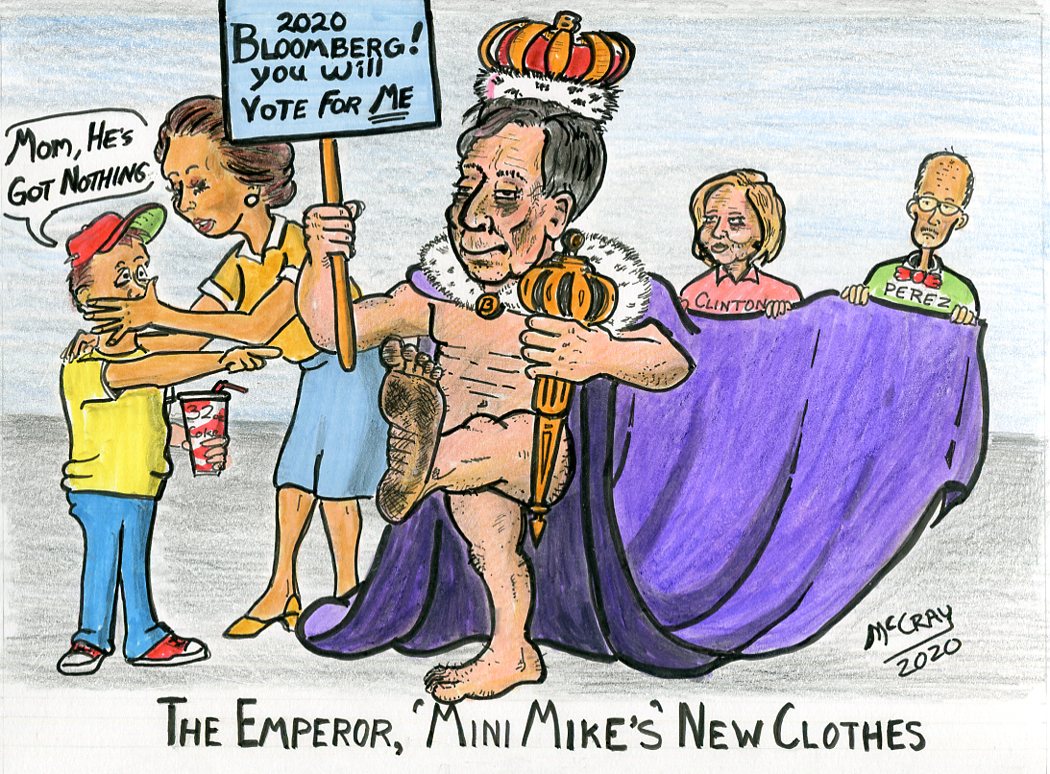 Hear ye, hear ye, his Royal Highness, King Nanny the first of New York City, Mike Bloomberg is seeking the presidential nomination of the so-called Democrat Party. Billionaire Mike Bloomberg who is worth around 60 billion dollars has used his money to bully his way into the primary races. Originally ineligible to participate under the existing rules of the Democratic National Committee, the DNC changed the rules to let Bloomberg participate. All it takes is money, and Bloomberg has dropped a massive amount of cash to buy his way into the race for the 2020 election of the president of the United States.

No one knows who is going to vote for Bloomberg, he has yet to participate in a caucus or a primary election. His projected standing is based on the always highly accurate polls, which means no one really knows. Bloomberg participated in his first debate on 19 Feb 2020, with the other candidates of the so-called Democrat Party in Nevada. Facing former V.P. Joe Biden, Sen. Bernie Sanders, Sen. Elizabeth Warren, Sen. Amy Klobuchar, and Mayor Pete Buttigieg, Bloomberg was worked over like a piece of cud chewed by a cow.

President Trump noted the next day at a rally in Colorado that ‘Mini-Mike’ Bloomberg spent 500 million dollars to get scalped by "Pocahontas," a.k.a. Elizabeth Warren. Bloomberg felt a hard chop from Warren over his derogatory comments toward women, and the non-disclosure agreements that the women employees were required to sign. His attackers left themselves open for repeated counter-attacks, but Bloomberg just stood there, like a deer in the headlights.

Bloomberg faired a little better in the South Carolina debate of 25 Feb 2020, with businessman Tom Steyer added to the debate line up. The debate degenerated into a "free for all" (which also reflects their platform!), with everyone talking on top of the other and trying to dogpile on the front runner Bernie Sanders. Fast reaction and the ability to pivot on the issues is simply not there - he will have to do better if he plans to build a base of supporters.

The former Republican, Mike Bloomberg is now flying the banner of the Democrats but is beating a drum that sounds more like socialism. He wants to push a version of Obama-care, the socialized single-payer medical program, and climate change. If King Nanny the 1st makes it to the White House, seizing guns is at the top of his to-do list. Like with many other anti-gun nuts, the gun, a piece of machinery and an inanimate object, is somehow at fault in crimes, instead of the user. It’s supposedly all about public safety, but if that was true, he would also be going after planes, trains, and automobiles, and oh yeah, don’t forget the sharp pencils. Like most on the socialist left, it’s all about disarming the public so people can’t defend themselves against a rogue government.

Socialism is the application of communist principles, where the government has total control, you have no rights and no protection under the law. Sanders calls himself a Democratic Socialist, but there is no such thing, it’s just a name to hide the threat. A socialist is either an International Socialist, which is what we see in China, Cuba, Nicaragua, Venezuela, and Russia’s old Soviet Union, the U.S.S.R. Or they are a National Socialist who wants socialist single-party control of a country. Remember, the full name of the World War 2 German NAZI Party is the National Socialist German Workers Party. The Antifa street thugs are a copy of Hitler’s Storm Troopers and believe most of the garbage pushed by the WW2 NAZIs.

Unfortunately, too many people think socialism is about social programs, they don’t understand that socialism is the chosen form of government used by despots and dictators to manipulate the people. In a democracy, the people get to choose their own destiny; under socialism, the government will choose your destiny for you.