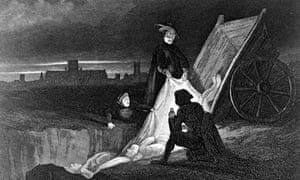 In the 17th century, London was a dismal, dirty, dangerous, and diseased city. And it was about to get worse, much worse.

When Black Death (bubonic plague) lashed London again in 1665, more than 68,600 died out of a population of 460,000. It all started slowly in London. Just before Christmas, two men died in Drury Lane, with a few additional deaths during the remainder of the winter. The next few months were months of beautiful weather in London, but not for people! As the temperature climbed, so did the death toll.

In our day, the world is being attacked by the coronavirus that started very slowly and has been accelerating across the globe. Hopefully, with modern medicine, the gallop will slow to a trot and will be just another blip on the medical radar screen to be soon forgotten.

But only fools will depend on that.

With the onset of summer in London, the wealthy and well-connected began to leave for the countryside. By the last of June, the College of Physicians fled, followed by the politicians and King Charles II in early July. In the last week of August, over 7,500 people died, and the dead carts rolled through the streets each morning picking up those who had died during the night. The dead were taken to the church cemeteries where huge holes had been dug and where the bodies were thrown.

Daniel Defoe (Dissenting Christian and author of Robinson Crusoe and A Journal of the Plague Year) wrote that infected people threw themselves into the pit, and sought to bury themselves since death was so sure and dying was so painful.

When the Black Death turned London into a graveyard, the impact on business was shattering. People of means fled the city when people started to die “like flies.” Defoe wrote that when it seemed that few would be left alive, “you may be sure from that hour all trade, except such as related to immediate subsistence, was, as it were, at a full stop.”

Those who lost their jobs were workers who manufactured articles that were not essential such as lace-makers, glove-makers, etc. Since no ships went down the river, all those workers were without jobs. All homebuilders were out of work. After all, hundreds of homes were empty since so many people had died.

Panic was usually the immediate reaction to the appearance of pestilence. Defoe records “the richer sort of people, especially the nobility and gentry from the west part of the city, thronged out of town with their families and servants in an unusual manner...nothing was to be seen but wagons and carts with goods, women, servants, children, etc.; coaches filled with people of the better sort, and horsemen attending them, and all hurrying away…”

As always, when fear rules, reason flees and intelligent people do dumb things. The "conners" ("con men") came out of the closets and set up shop in proximity to the "connees." The sheep were ready to be sheared! Those people still in the city were "running about to fortune-tellers, cunningmen, and astrologers to know their fortune...and this folly presently made the town swarm with a wicked generation of pretenders to magic....” The quacks had long lines of gullible people at their doors every day. Seems to be no end to people wanting to be deceived.

As always, the people who lost their money were those who could least afford to do so.

Other con artists were more subtle than the astrologers, but not much. Notices were posted throughout the city inviting people to get the sure cure for a sure price. The notices varied. “Infallible preventive pills against the plague.” “Never-failing preservatives against the infection.” “Sovereign cordials against the corruptions of the air.” “Exact regulations for the conduct of the body in case of an infection.” “Anti-pestilential pills.” And, “Incomparable drink against the plague, never found out before.”

The people spent their hard-earned money for pills, potions, and preservatives, preparing themselves for the plague, not against it. In a later plague, infected folk sought to be cured by bathing in urine collected from people who had eaten cabbage!

Death was on everyone’s mind. The talk among the uninfected was about the grave, dying, sickness, fevers, spots, dead carts, etc. They were not much interested in fun and games. Defoe wrote, “the gaming tables, public dancing rooms, and music-houses...were shut-up and suppressed.…” He added that “a kind of sadness and horror at those things sat upon the countenances even of the common people.”

People were not thinking of games but of the grave.