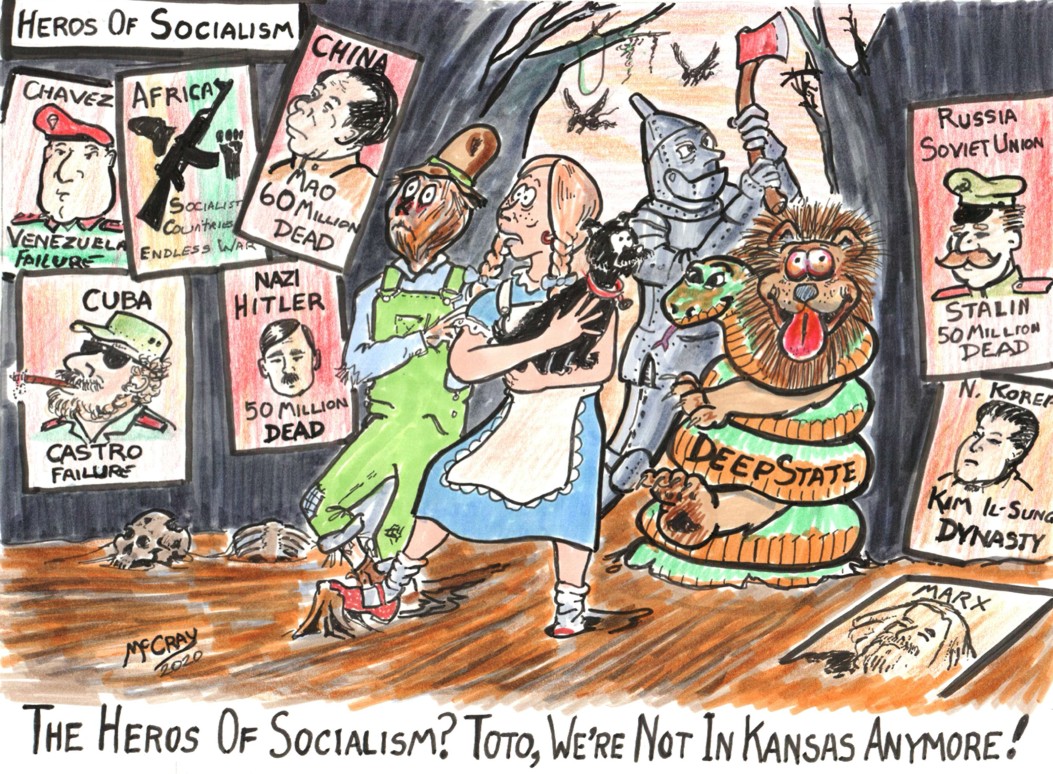 The wizards of socialism, Sen. Bernie Sanders and friends have always promised everyone a trip down the yellow brick road to the Emerald City. There is just a slight problem with their thinking and that occurs when reality hits, like what happens when the money runs out. That’s what happens when the socialist governments have taken control of the economy, nationalizing businesses, diverting all the money to themselves, and then the job market dries up. A well-used example of the disaster that is socialism is the mess Hugo Chavez made of Venezuela after he took control 25 years ago. A once growing vibrant country, Venezuela had everything going for it as an oil producer, a good economy with investors from around the world wanting to participate.

After Chavez disarmed the population and created his police state, Venezuela went into a slow death spiral as Chavez copied Castro’s regime in Cuba. The former bus driver, Nicolas Maduro who succeeded the strongman Chavez after his death from cancer in 2013, has driven the country into an even deeper hole. Maduro the clueless dictator has been propped up by Russia, Turkey, China, Iran, and Cuba, with technical advisors and a 25,000-man Cuban army division to provide for his personal protection and to control the population. You know Maduro has a real problem when he can’t trust his own military to protect him. The Venezuelan population not connected to Maduro’s Party are starving with over 4 million having fled into the neighboring countries to survive.

U.S. Senator Bernie Sanders has praised Venezuela as a shining example of how well socialism works. Much in the same way he had praised Daniel Ortega’s Nicaragua in 1985, which is another mess like Cuba and every other socialist utopian wonderland that turned into a nightmare. The march down the road toward socialism is paved with the bodies of the dead, socialism is the scam job used by dictators, despots, and military police states to control their populations.

The death toll for China is over 60 million, Russia’s U.S.S.R. is 50-60 million, Cambodia is 2 Million, Viet Nam is 3 million including 58,000 U.S. Dead, the National Socialism of Adolph Hitler killed over 50 million including 405,000 U.S. military dead, North Korean War cost over 3-5 million with 35,000 U.S. dead, and thousands more have died in Africa, South America, Venezuela, Nicaragua, and Cuba - all are complete failures. The only thing the followers of Karl Marx’s communism have accomplished is failure, devastating economies, and death.

You have to wonder from what perspective Bernie Sanders views the world, the fantasy world that he keeps grasping for does not and has never existed. A believer of the hard core Russian style of socialism, Sanders deludes himself as a great revolutionary of the Soviet Union. The reality is Sanders is an out of date socialist has been, pushing the same old pile of putrid garbage around for everyone to smell. The whole time he is telling everyone it smells great and promises the impossible, where everything is always free and no one has to work.