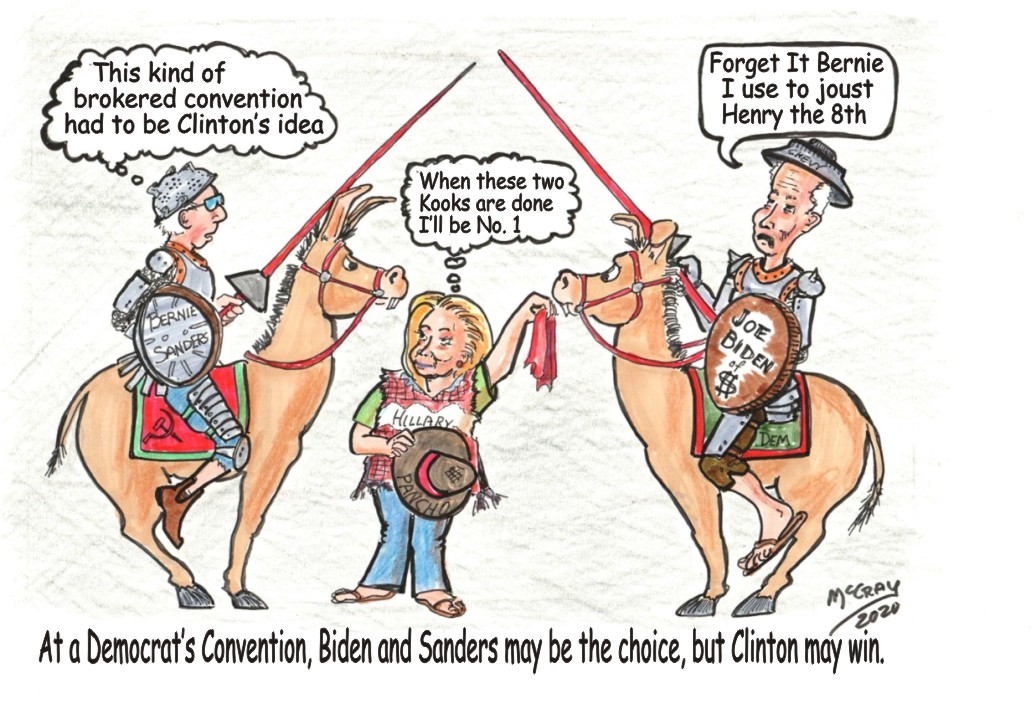 A replay of the 2016 election may be in the offing, as Sen. Bernie Sanders is in low gear stuck in the mud and former VP Joe Biden is having trouble remembering where he is at in the world. If Sanders and Biden wind up facing off in a brokered convention, don’t be surprised if the winner on stage is Hillary Clinton. With Joe Biden slipping gears and gaffing more often than usual, and Bernie Sanders’ revolutionary socialism turning off a lot of Democrats as well as dropping in the polls. Hillary Clinton may be seen by some as a way out and a replacement for Joe Biden, regardless of all the baggage Clinton is dragging around with the Feds snapping at her heels. Even though Hillary Clinton has said she wasn’t running, sitting in the White House would be a way to get the Department of Justice investigations off her back.

Let’s face it - Joe Biden isn’t exactly using the right formula to attract supporters by threatening or insulting people along the campaign trail. In one incident after another Biden’s mouth is operating at a 100mph and his brain seems to be moving at 40mph - in reverse. As a result, he will be in the middle of a sentence in one thought only to change to another thought halfway through a statement, sometimes contradicting himself. I have never been a fan of either of these two, but in Biden’s case, it is still painful to watch.

Whereas, Bernie Sanders is leftover refuse of the Cold War whose brand of socialist politics has never fit into American politics or America's beliefs in a free society. He has continued to push the Marxist ideals of Karl Marx as if they are the only way to govern - Karl Marx along with Fredrick Engels wrote the Communist Manifesto in 1848. One of many unrealistic utopian ideas past around as a response to the working and living conditions of England’s Industrial Revolution.

Communism refers to communal ownership where no one owns anything, the state owns all and everyone is supposed to be equal in all things. This is the style of government practiced by China, North Korea, and the Russian Soviet Union of 1917-1991. Watered down versions of communism have been pasted on as Socialism, it has been tried in over 50 counties, and has been an abject failure costing millions of lives.

The state has complete control and the people are subjects of the state, usually a police state, and have no rights, usually living in depressed economies. This is the garbage Bernie Sanders wants the people of the United States to accept and live under, the people are to give up their rights and to have no protection from the state. A self-styled communist revolutionary, Sanders has supported the enemies of the United States. He has preached the greatness of the old Russian Soviet Union, China, and other despotic regimes, he has backed socialist takeovers of other countries around the world.

How Bernie Sanders is able to sit in the U.S. Senate is mind-boggling. In most other countries where a citizen, a sitting major political figure has advocated the replacement of their own government, especially by a communist structured government, they would have been removed from office and tried for being a turncoat. Yet, here we are on the verge of a presidential election and one of the leading contenders is Bernie Sanders, and the other is Joe Biden, who is spinning his wheels and seems to be losing traction with his surroundings. If Joe Biden actually made it to the White House, the question is, who will be running the country - it won’t be Biden. People need to remember that it isn’t just the candidate that is elected to the White House, it’s the Vice President and their staff.